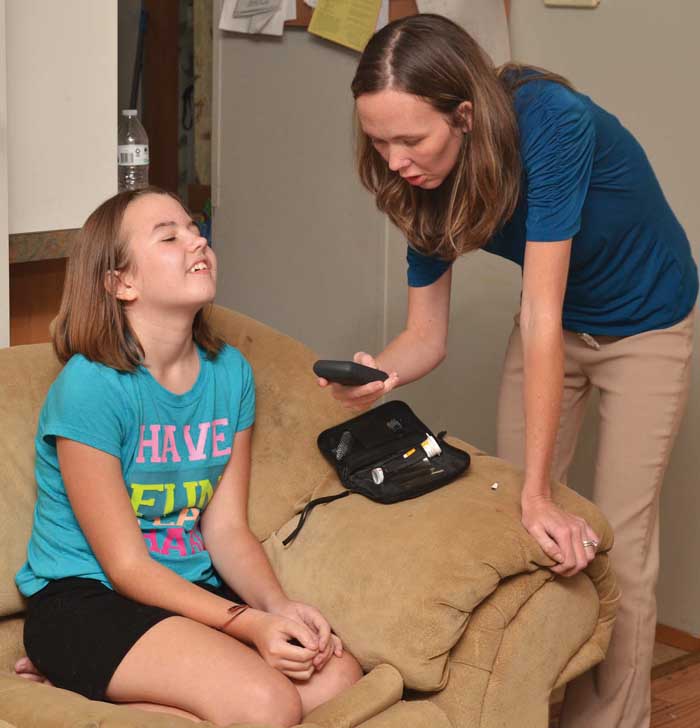 Mackenzie Smith’s smiles go from ear to ear. She’s full of energy, and her smiles are usually followed by laughter. She’s a typical joyful 11 year old.

Or so it would seem.

Mackenzie is not that typical, because she can’t participate in sports, and on Friday and Saturday nights, when her classmates are spending the night at each other’s homes, Mackenzie is at home, monitoring her glucose. She has Type 1 diabetes.

When she was 10, Mackenzie’s doctor discovered sugar in her urine at a routine appointment, and by the next day, she was in Brenner’s children’s hospital, where she would spend three days. Her mom, Brooke Potts, said she went from being a child who hated shots and needles to being able to check her own glucose, by pricking her fingers 10 to 12 times a day. She also wears an insulin pump and has a monitor that controls insulin delivery.

But Potts fears that is not enough.

“She has no symptoms at all, if she’s very high or very low,” Potts said. “When she was diagnosed, she didn’t have any symptoms at all. My biggest fear is her dropping in the night and something happening to her. That’s why we need a dog.”

And not just any dog.

Mackenzie is on the waiting list for an alert dog from Heads Up Hounds. The program trains shelter dogs who might otherwise spend their lives in shelters or be euthanized and places the dogs for search and rescue, service, and therapy. Potts said while some service dogs can cost $20,000, the Heads Up Hounds program will place a dog for about $7,500. The family was given the $1,500 to be placed on the program’s waiting list, but does not have the means to complete the purchase.

Alert dogs are able to detect the odor that is emitted when blood sugar levels are low or high, an odor that humans are not able to detect. Potts said the dog would be with Mackenzie always, and if it detects a change in her blood sugar, will nudge her until she uses her monitor. It won’t be able to be touched by Potts, or her husband, Tim, or by any of Mackenzie’s three siblings, which Potts said would be the hardest part of it.

“Mackenzie will be responsible for the dog, for taking it out to go to the bathroom and feeding it and everything with it. We won’t be able to do anything,” she said.

Mackenzie will send 20 pictures of dogs she likes to the foundation, which will then try to find similar dogs between the ages of one and two at shelters, Potts said. The process takes about a year, and once the dog is ready, Potts, Mackenzie and Tim will fly to Nebraska for three days of training and bring the dog home. Potts said if it turns out the dog is not a good fit, they are able to return it. Mackenzie has already decided she would like a male dog and wants to name it Sage.

Normal blood sugar levels are between 80 and 150, Potts said, and Mackenzie’s has been as low as 21 and as high as 410. When the levels swing, Potts becomes agitated, and moves quickly to have Mackenzie check and recheck her levels.

She said they have both become knowledgeable on the subject of diabetes. Mackenzie can “eat anything she wants but has to be careful about carbs,” Potts said. “She can’t put a piece of gum or a peppermint candy in her mouth without checking her sugar first. Halloween is the worst because while everyone else is eating candy, she can only have one piece.”

Potts packs Mackenzie’s lunch so they know more closely the amount of carbohydrates she is consuming during the day. She said she has encouraged Mackenzie to become involved in any programs or fundraisers having to do with diabetes.

“She’s had to grow up very much. She was mature before her diabetes, but she’s even more mature now,” Potts said.

Mackenzie looks at her mom and says, “Some days I just want to give up and lay there.”

Potts kisses her daughter’s forehead and tells her, “Just hope for a cure baby girl.”

Mackenzie’s story is on the fundraising website YouCaring.com, under Mackenzie Smith. Potts hopes to raise $8,000, enough for the dog and travel expenses. She is also selling t-shirts that say Homeless to Hero from her Facebook page, Brooke Potts.