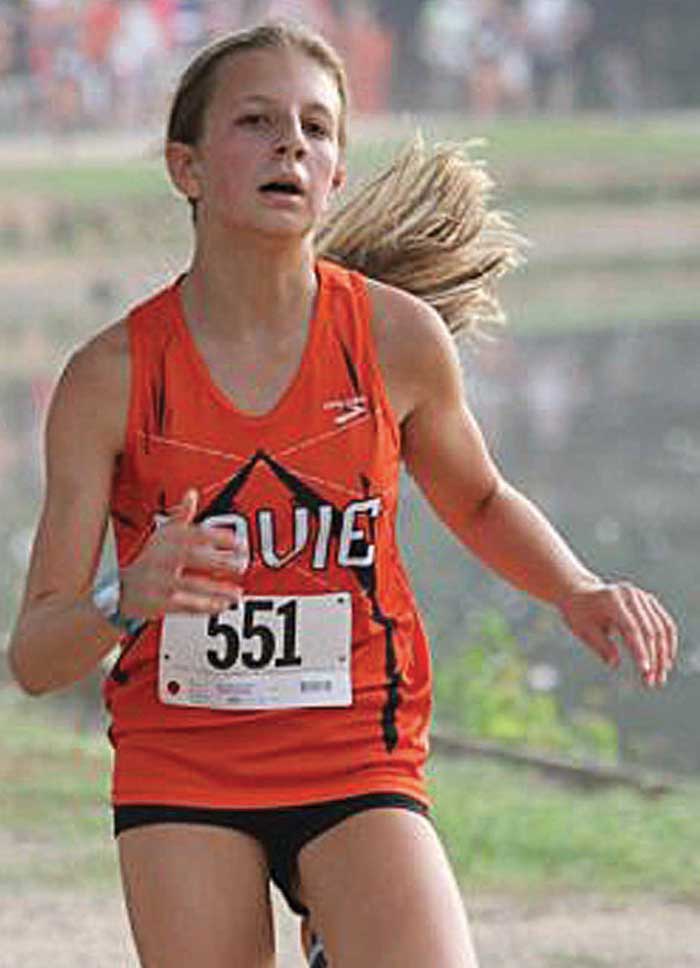 Meredith Everette is a freshman runner for the War Eagles.

“This was our first time running under the lights, so it was a pretty exciting atmosphere,” coach David Koontz said. “This also gave our team a chance to run the new course after a change was made to the previous course that serves as our conference, regional and state championship. The new layout was new to us and the town of Kernersville saw an opportunity to relieve congestion on the first turn from the old course and run a new route through the narrow strip along the road just once where it easily floods. This configuration was about 60 meters longer from the previous course and made for some long inclined areas.”

Davie ran in all three races (junior varsity, invitational and championship). In the JV races, senior Jordan Fincher led the Davie girls with a time of 26:36. Junior David Sigmon led the boys with a time of 21:49.

In the invitational race – which featured many of the top-7 runners from 1-A and 2-A schools and “B” teams from the strong and deep squads – the Davie girls finished 22nd out of 23 teams.

“Rodriguez had a strong race and actually earned a spot in the top 7 at Statesville this week,” Koontz said. “These five guys are all young (three sophomores, two freshmen) and I hope they continue to get stronger and more experience as the season progresses.  Even though they were fielded as our ‘B’ team, they were running against varsity talent. They responded well and their times were right where they needed to be considering the changes to the course.”

In the championship races, the Davie girls finished 24th out of 27 with an average time of 23:39 and 1:11 difference between No. 1 runner Kaitlyn Hernandez and No. 5 Meredith Everett.

“Emily Pender, Abby Yount, Allie Carter, Meredith Everett, Salem Cartner and Savannah Everett all had strong performances and have really established themselves early on,” he said. “They are running together and pushing each other. We’ve got to keep creeping those times down there so we will be ready come conference championship and regional time. They are heading in the right direction.”

In the boys championship, Davie finished 22nd out of 28 with an average time of 18:36, and a 2:33 split between first and fifth places.

“Our guys had a great race, and I think the early test on this new course will pay off when we get back there in October,” he said. “It gives us time to prepare and come up with race strategies.”