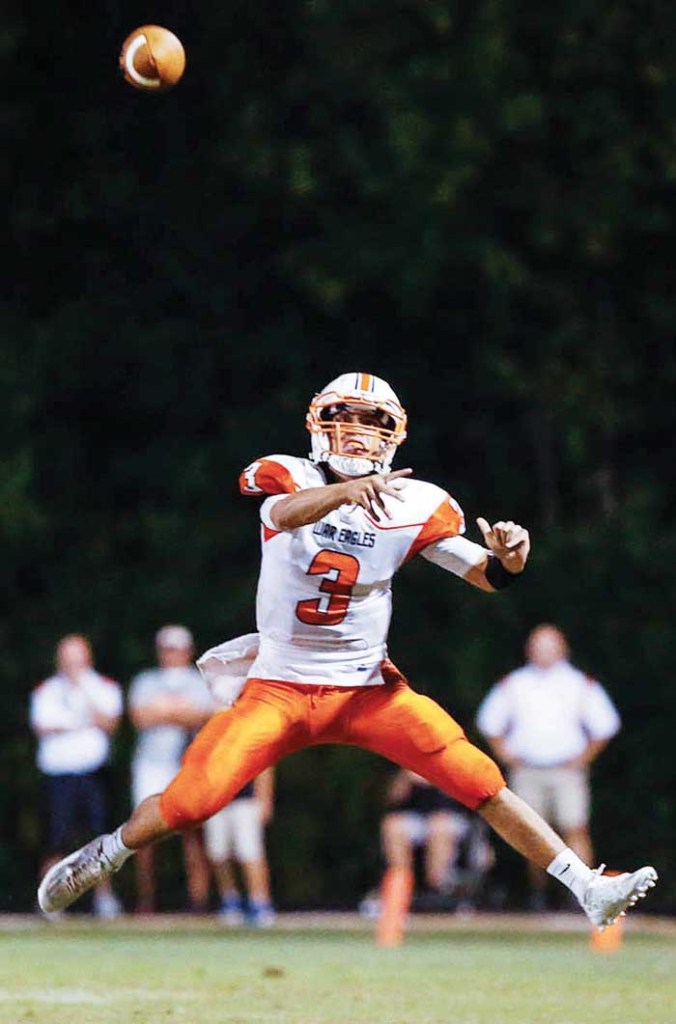 Quarterback Chris Reynolds fires a pass in a recent game at West Rowan.

SPENCER – Davie’s varsity football team had spent five straight games watching the other team celebrate in the postgame. While that may not be a huge drought at some places, it’s a lifetime at Davie.

The War Eagles got the monkey off their back Friday in Spencer, beating North Rowan 21-6. They stopped a six-game road losing streak and improved to 1-3 with one nonconference game to go.

All those growing pains made the breakthrough at North Rowan feel so much sweeter. Meanwhile, North Rowan is still reeling at 1-3 with three defeats in a row.

“Oh boy, it feels real good,” Holman said. “I told them the other day, we put them through a storm and they fought some beasts. But it’s about time to start seeing some rays of sunshine. We got the first one under our belts. We’ve got to enjoy the moment tonight.”

North took a 6-0 lead on the 11th snap of the game, with Alonzo Sirleaf catching a medium pass, breaking a tackle at the Davie 45 and galloping in for a 76-yard score. Davie blocked the extra point.

“I thought we were on to something,” North coach Ben Hampton said.

“That’s a blown coverage,” Holman said. “We misaligned and it was there for them. Take nothing away from them. They had us schemed up well for that play. We talked about it on the sideline, adjusted and tried to take that away.”

From that point on, Davie’s defense could do no wrong. North managed just 120 yards after Sirleaf’s long play. North’s top rusher, Xavier Haley, was smothered all night (five yards on 10 carries). After allowing an average of 48 points in the first three games, Davie gave up the fewest points in seven games (49-7 over Reynolds in 2014).

“Coach (Tim) Devericks and that defensive staff, man, they put in a lot of overtime to get the young men running to the ball,” Holman said. “To see them swarm takes me back to some defenses from years past. Those guys are taking baby steps. They got a taste of how it feels to swarm. I just can’t say enough about what coach Devericks has done with our staff and getting after it.”

Junior defensive end Spencer Wilson went off. When Jayden Jones tried the left end, Wilson put him in a seven-yard hole. He stopped the quarterback on the next play for a one-yard gain. On North’s next possession, he met running back Jaleel Webster at the line of scrimmage and stopped him in his tracks. Haley tried to make something out of nothing, reversing the field. Wilson tossed him back and he was finished off by teammates, resulting in a 16-yard loss. Wilson threw Jones for a six-yard loss, although he was penalized for a horse-collar tackle. But three plays later, he sacked the quarterback six yards behind the line.

North had just 30 rushing yards. It failed on 10 of 12 third downs and called on the punter nine times. Defensive back Anthony Hunckler had a tackle for loss seconds into the game. A blitzing linebacker, Cody Hendrix, had a six-yard sack. On a third-and-1 play from the Davie 5, James Boyle, Jalen Redmond and Hendrix sent Haley for a three-yard loss, and North missed a 25-yard field goal on the next play.

North threw incomplete when another blitzing linebacker, Broc Barnette, banged into the QB as he released the ball. The next pass was incomplete as safety Caleb Wallace timed his hit on the receiver perfectly. The quarterback lost three yards as outside linebacker Jack Little strung out the play. Barnette forced an incompletion by hitting the quarterback as he threw. Later, Barnette came crashing in from the blind side and had a nine-yard sack.

Boyle, Barnette and Hendrix are the main linebackers, but Kinston Whitener rotated in and “made some plays,” Holman said. “Coach (Dave Hunt) has four to play three (spots).”

“I was proud of our secondary, except for the one breakdown in coverage (on Sirleaf’s TD),” he said.

Merrifield is a freshman who acquitted himself well at free safety. He made his varsity debut as Peyton Hampton was sidelined by injury.

“He played really well,” Holman said. “He’s a special young man. He played a lot for snaps and he broke on the ball real well.”

Holman knew the team’s top tackler, Boyle, was primed to wreak havoc from the time he strapped on the equipment.

“Boyle played a heck of a game again,” he said. “He turned it loose.”

Little and Boyle also made their presence felt on the kickoff and punt teams.

“Little absolutely destroyed a couple people on kickoff team,” he said. “Boyle came down on a punt, a kid tried to block him and that kid did a backwards somersault. It looked like Kenny White, Mr. Buster, years ago (in the late 1990s).”

Less than two minutes after Sirleaf staggered Davie, Wall caught a slant at the North 44 against one-on-one coverage, and he was gone – the 77-yard TD and Jonn Young’s kick giving Davie a 7-6 lead.

“Chris threw a great ball and Wall made a great catch,” Holman said. “They played a lot of man free and zero man, so we were able to take advantage of that at times.”

In the second quarter, McGee made a 38-yard reception. After running back Greg Dalton picked up nine and five yards on back-to-back plays, sophomore Ben Summers’ third varsity carry was one to remember, a nine-yard TD up the middle. North blocked the extra point, but Davie had a 13-6 lead.

“We brought up four freshmen this week, and we always eight-quarter Ben,” Holman said. “Ben ran the ball this week in practice because we had some guys banged up and we said: ‘Hey, he’s got to tote it tonight.’ I’m proud of that young man.”

Although Davie’s final drive of the half ended with Young’s first field goal attempt of the season – from 30 yards – being blocked, Ellis came down with what you would call a spectacular catch if it weren’t so routine. He went over Courtney Roseborough for a 39-yard grab. When the play ended, Roseborough put his hands up in disbelief. Two plays later, Reynolds rolled out and fired to Ellis, who made a sliding catch near the sideline for 21 yards.

Ellis was a major factor with eight catches for 102 yards, the eighth 100-yard game of his career to tie the record of Joe Watson, who had eight from 2008-10.

Ellis sapped North’s spirit at the start of the third. First, he returned the second-half kickoff 41 yards – with a 15-yard late hit tacked on. Then he burned one-on-one coverage by catching a slant at the five-yard line and scoring a 19-yard TD. Reynolds threw to Wall for two points and it was 21-6 with 10:56 remaining in the third.

“Something we’ve worked on is our special teams,” Holman said of Ellis’ big return. “We’ve spent a lot of time; I believe it’s that important. For us to reap some benefits off of it is a big thing for us.”

The War Eagles, who were not about to suffer the first 0-4 start since 1990, got a stellar first-half effort from Reynolds, who threw for 192 of his 231 yards in the first 24 minutes as Davie outgained North 358-196 for the game. And the ground game showed signs of life after producing a meager 108 yards in the first three games. Stephon Dalton and Greg Dalton led Davie to 127 rushing yards, finding room behind a cobbled together offensive line.

S. Dalton turned in 69 yards, but he would have had 105 if not for a 52-yard TD getting negated by a questionable block in the back.

“We’ll address those things Monday because we’ve got to make sure we don’t create those type of penalties,” Holman said.

Notes: Davie’s losing streak was the longest since a five-gamer over the final two games of 1994 and the first three games of 1995. … Davie’s offense went stagnant in the second half as the teams combined for 16 punts. … Young has missed two field goals in two years, and both were blocked. … Linemen Clubb, King, Austin Freidt and Steve Robertson were out with injuries, but Holman said all should return soon or at least before the end of the season.