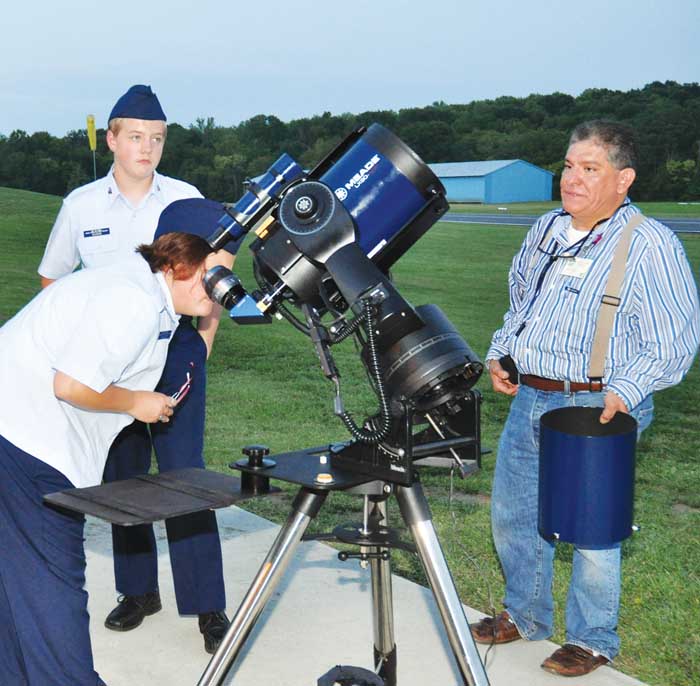 Gennifer Chandler taks a look through the telescope with Joseph Kearns and Steve Esparza.

Using the internet, cameras and telescopes, Esparza captured the attention of senior members, cadets and visitors.

On the first Tuesday of the month, the squadron invites a guest to speak on a topic of his/her choice as a way to broaden the horizons of members. This month’s talk was well out of the ordinary.

As a member of the Forsyth Astrological Society for the past 10 years, and an amateur astronomer, lecturer and astrophotographer, Esparza showed how technology can make observing the heavens more interesting by utilizing the complexities of the world wide web, and the potential for real-time interaction with other astronomers around the world. Esparza uses http://www.nightskiesnetwork.com/ in daily broadcasts.

After setting up one of his large portable telescopes outside in front of the hanger (meeting place), he set up a computer link to his at-home backyard observatory. His goal was to communicate with an assistant in the observatory in real time, and to see what was being seen through the observatory telescope.

With Esparza was a fellow society member, Priscilla Ivester, who used posters to show how light pollution can affect everything from health and the natural environment to observing the night skies.

She also talked about simple solutions to the problem, such as cap covers for spotlights and streetlights which direct the light downward where it is needed, rather than up into the sky where it simply adds to the nighttime light pollution.   Just seeing the changes in light pollution that have been made from the 1950s to the current time was impactful.

There were several questions from the audience about the differences between reflector and refractor telescopes, and what the Forsyth Astrological Society was about.

For more information about astronomy or the Forsyth society which meets on the fourth Tuesday of each month at SciWorks, 400 W. Hanes Mill Rd, Winston-Salem, call (336) 767-6730 or visit http://www.fas37.org/wp/.