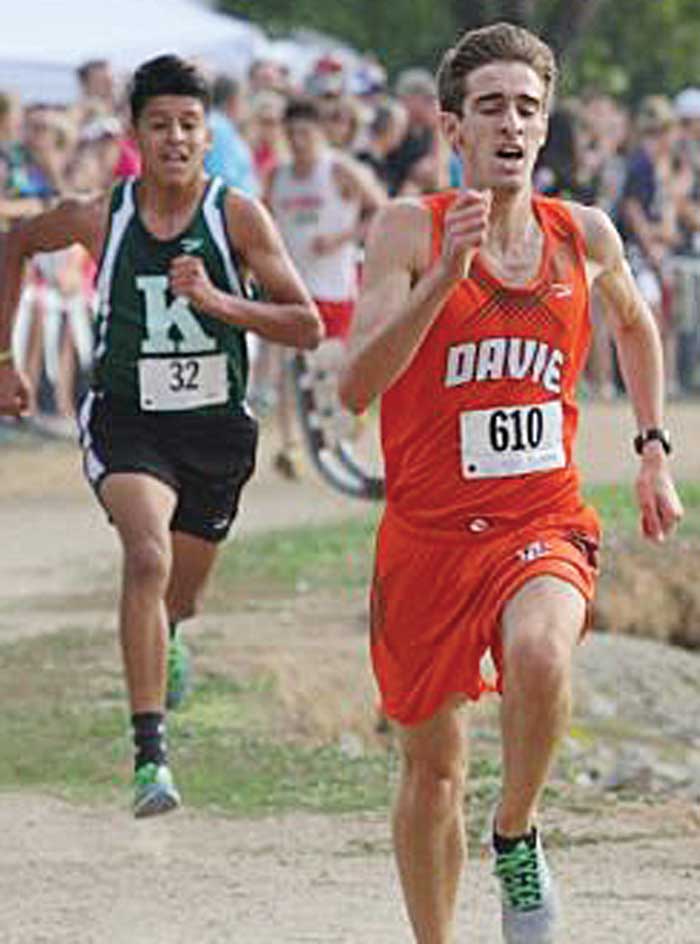 The Davie cross country team traveled to McAlpine Park in Charlotte for the 10th-annual Providence Invitational on Aug. 29.

“Typically this meet has fallen on the Saturday before school started, but this year it was the Saturday after the first week, so we have had almost an entire month of practice under our belts, not to mention the summer training we did,” coach David Koontz said. “Among the 68 (29 girls, 39 boys) runners we have, our kids put in well over 13,000 miles combined, and I’m sure I am underestimating that number. We had a strong summer-training program and the group of kids we have right now have the blue-collar work ethic. We also added some coaching talent with new teacher Julia Means coming on board.”

Julia ran cross country in high school, where she finished 20th in the state of Kentucky and helped lead her team to a state championship. She went on to run at Furman, where she made the Southern Conference All-Freshman team.

“Her racing resume and experience when I found out about her coming to Davie was very impressive,” Koontz said. “We are blessed to have her on staff, and she brings a wealth of knowledge to help with our team’s future.”

“I had predicted times and paces for them and we told the girls to go out conservative and smart,” he said. “They did and they all went well under our predictions.”

“If you compare that to our average at regionals at the end of the season last year of 22:10, we are in a prime position to improve our standing in the 4-A Midwest Regional and conference,” he said.

Hernandez had a great race and finished 56th out of 277 runners with a time of 21:47, which just was a few seconds off her career best.

Carter, S. Everett, Larsen and Stillson all had career-best times.  Freshmen Salem Cartner and Meredith Everett had great performances for their first time out, finishing in the top seven for Davie. Junior newcomer Zella Ebert had a great race as well for her first event.

In the Girls JV race, freshman Abby Yount stole the show. “I knew she would be fast, but she really outperformed herself,” he said.

Not only did she lead the JV girls, her time of 22:23 would have put her behind Hernandez in the Varsity race for second.  She finished 36th out of 340 runners in the JV race.

“Her endurance level is very strong and she gets stronger the longer the race is,” he said. “We had 19 girls in the JV race and they all exceeded our predictions. Many of them were running for the first time, so we were happy with their performance.”

In the Boys Open race, senior Nick Simmons stole the show.  He finished second overall in a race of 273 runners.

“Nick came by me at mile one clocking at a 5:05 and looked like a horse just hitting his stride,” Koontz said. “He was in the top 10 of the field. By the time we got back out to the pond he had taken the lead before mile two. He was overtaken by a North Lincoln runner but held on for second place and stamped a new personal record of 16:15.”

Simmons was just 20 seconds shy of Davie Hall of Famer Garrick Hill’s record of 15:55 that he ran in the 4-A state championship back in the late ‘90s.

“Nick has put in the work to achieve this year and it really showed,” he said. “He energized our entire team and I hope we can feed off that next week in practice.”

Simmons was not the only senior to make a bold statement. Cade Spencer and Peyton Jones also had career bests with times of 17:54 and 17:56. Jones took 1:18 off his previous best and Spencer took off 16 seconds.

“These guys, along with Nick, made a commitment to training over the summer, and for a group of high-school guys to make a sacrifice and train over the summer, the payoff from this performance was worth it,” he said. “They aren’t done yet, though.”

Freshman Clay Summers finished fourth at 18:23, followed by junior Bryson Penley at 18:25. Senior John Myers was sixth at 18:40 and Nick Mathes seventh at 19:10. Mathes and Penley had personal-best times.

“Summers has been running a lot over the summer and has a super competitive streak in him,” he said. “He’s shown a lot of maturity early on and is learning a lot from our seniors.”

Landon Bandy, Harrison Shives and Jack Robinson were the 8-10 runners for Davie. Shives got a personal-best time of 20:07.  Overall the boys finished eighth out of 31 teams – a huge improvement compared to 20th last year. Its average time was 17:49, which is the fastest average it has had since Koontz has been at Davie.

“We are excited but we must take it one race at a time, continue to train smart, and take care of our bodies,” he said. “The foundation though was laid this summer.”

In the JV race, newcomers Alex Rodriguez and Cameron Lee led the way with times of 19:50 and 20:36.  Sophomore Rodriguez is a two-sport athlete this fall as he also plays soccer. Lee is a freshman who has surprised Koontz.

“He wasn’t able to put in the volume of miles as we would like, but his natural talent has shown up,” he said.

Next race will be the Friday Night Lights, which will be held at Ivey Redmon Park in Kernersville.

“We will race under the lights, cannons will start each race and they plan to have a fireworks show at 9:30 at the conclusion of the last race,” Koontz said. “This is a very spectator-friendly course and should be an exciting meet for anyone interested in watching our team race.”