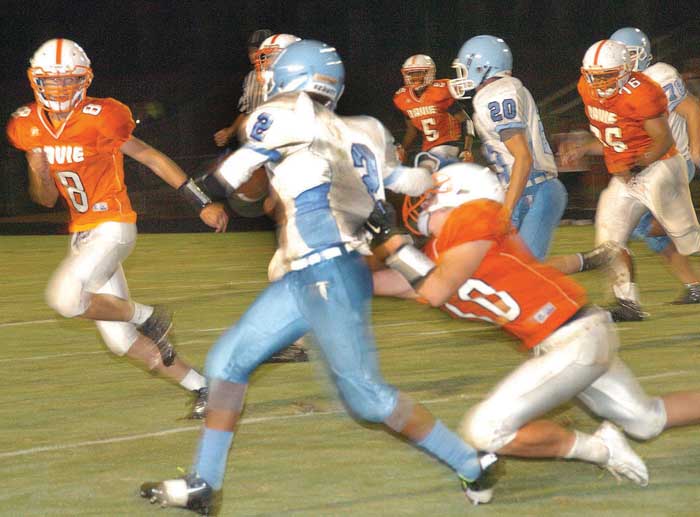 Davie’s junior varsity football team rolled past visiting West Rowan 23-6 in the second game of the season, and it was not as close as the score. Penalties prevented the War Eagles from putting up a bigger margin.

It was a solid bounce-back effort following a season-opening 23-7 loss at Page. The original date at Page was rained out, so Davie played two games in four days last week.

At Page, Davie ran into a team with loads of talent. Davie was limited to 38 yards on 21 rushing attempts. Joseph Gadson was the top ground gainer with a mere 22 yards on four carries. It was the third straight loss and the sixth in seven games dating to 2014. And it was the seventh straight loss to Page, with the last win coming in 2008.

“We busted off some pretty big gainers, but we had a lot of negative yards due to sacks,” coach Blaine Nicholson said. “We’re much better on the offensive line than last year. But Page outmatched us size-wise on the defensive front. Our guys knew where to go, but when they’re 50 pounds heavier than you are …”

Page went up 14-0 in the first quarter. With 30 seconds left in the half, Hite Merrifield, who split snaps at quarterback with Ben Summers in both games, and receiver Mitchell Ijames got Davie back in contention as they hooked up for 19 yards.

Then Mason Wilson converted the first kick of his life on the extra point.

“We had Jared Griggs last year and he was really good for us, but he’s on varsity now,” Nicholson said. “We had to find (a kicker). We held kicking tryouts and he seemed to be the best fit. He’s an athletic guy who we can trust. He’s learned a lot (even though) he doesn’t get to spend as much time kicking because he does so much for us at other places.”

Page scored nine unanswered points in the second half to win going away, the final points coming on a safety when the punter couldn’t handle a wet ball from his own end zone.

The quarterbacks were both five of 12, with Summers throwing for 95 yards and Merrifield for 79. Ijames had four catches for 70 yards, Wilson and Cody Smith had two catches each, and Ta’Saun Martin and Ty Dockery had one apiece.

Nicholson was content with the way the defense played. Holding Page to three touchdowns was not a bad showing.

“We played very well (on defense), we just didn’t play consistent,” he said. “We got beat on a few big plays. They ran a lot of fullback trap and tailback sweeps, and we were getting hooked on the outside. And we hadn’t seen any fullback traps, so the freshmen didn’t know how to play it very well.

“We asked them to play a lot of snaps and they showed up big. If it wasn’t for big plays and a few special teams mishaps, we probably would have been in (contention).”

Martin, De’Maura “Mo-Mo” Isaac, Ijames and Merrifield were outstanding in the secondary.

“Page tried to overmatch us because, like the varsity game, they had a really big receiver,” he said. “But I think we overmatched them in the passing game.”

Isaac intercepted a pass and had a long return. When Merrifield wasn’t quarterbacking, he was seeing time at safety.

“Our DBs played really well,” he continued. “Isaac was coming downhill and really helping with the run defense and busting heads. Merrifield seemed to be in on almost every single play. He was hustling all around the field.”

Summers also played both ways, his other position being linebacker. Damien Garcia was as good as advertised at LB.

“We asked Summers to play a lot of positions, and he was out there playing his heart out,” he said. “Garcia really got downhill quick. He set the tone pretty early. I mean he blew a couple plays up in the backfield.”

Bright spots on the defensive line were Ronald Wilson and Jesus Olmedo.

“Wilson is a load at nose guard,” he said. “He’s hard to handle. If we can keep his energy up, he’s really tough to stop for any center. Whoever we’re playing, he’s probably going to be bigger than the center.

“Jesus is a tough defensive end and he’s all around the ball. If we can get his skills honed in, he’s going to really be able to help us on varsity in a year or two.”

Summers was a force running the ball, and the defense was splendid in the 23-6 win over West Rowan. “We had nine to 10 guys flying to the ball with bad intentions,” Nicholson said.

The coach heaped praise on all three levels of the defensive unit.

“The Olmedo twins (Jesus and Anthony) and Wilson are all 220-plus,” he said. “They didn’t necessarily make all the tackles, but in the scheme we run, they were space-eaters and they allowed our linebackers to run free. Those guys up front are the key to it.

“Our corners and free safeties, it’s going to be tough for somebody to pass on us. We’ve got three really good corners (Isaac, Martin and Ijames) and we’ve got good free safeties, too. Merrifield and Charlie Osborne are splitting reps because Hite is so active on offense. We have a good rotation with our entire secondary.”

At linebacker, freshman Matthew King recorded a sack and “two or three tackles for losses,” he said. “Garcia runs around like his hair’s on fire. We sent him on a couple blitzes and he was disrupting whatever the offense was trying to do.”

With 8:30 left in the second quarter, Gadson opened the scoring with a five-yard run. Summers completed a two-point pass to Wilson. With 28 seconds to go in the half, Summers scored on a nine-yard run, then added the two-point conversion for a 16-0 bulge. Davie’s third touchdown came on Dockery’s 18-yard run. Wilson closed Davie’s scoring with the extra point, and the margin was 23-0 with 7:31 remaining in the third.

The War Eagles’ first win since the eighth game of 2014 (42-6 at Parkland) would have been greater without nine offensive penalties and a turnover.

• They drove to the West 1, committed a five-yard penalty and threw an interception from the 6.

• An interception by Martin was erased by a flag.

Davie didn’t throw much (Summers completed three passes for 41 yards and Merrifield completed one for 32). It didn’t need to because Summers did a marvelous job on the ground, whether he was running QB keepers or getting handoffs from Merrifield. Summers churned 14 times for 94 yards. Dockery added 45 on seven carries and Gadson had 23 on six carries.

“For being thrown into that (running-back) role this year, Summers is showing patience and seeing the hole develop,” Nicholson said. “He has great footwork as far as making the cuts. He’s really been a nice surprise as far as his production at that position.”