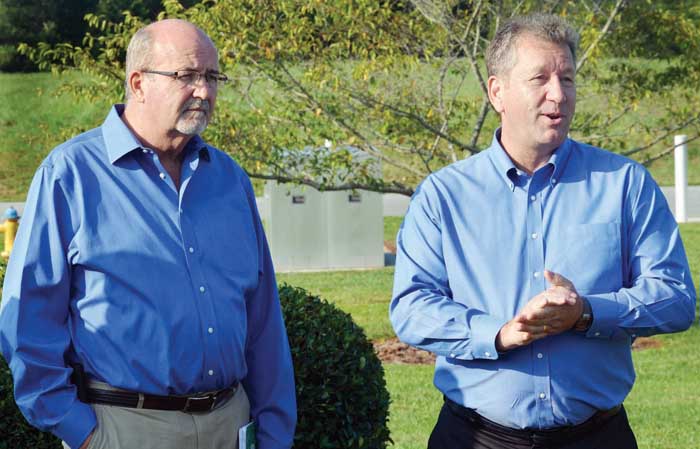 Avgol America is expanding its operation in Mocksville, and last week broke ground on a $40 million expansion that will bring 50 new jobs and make the plant the single largest producer of non-woven fabric in North America.

Ronnie Batchler, vice president of operations North America with an office in Mocksville, said the expansion will add a production line and increase warehousing capabilities. The company is closing a warehouse in New Jersey.

He said potential employees need to be computer literate, with technical and mechanical skills. A job fair will be held this fall. The company now employes more than 200 here. It operates 24 hours a day, seven days a week, and has been in Mocksville for 16 years.

David Hodgetts, Avgol chief operating officer, said at a groundbreaking ceremony that Mocksville was competing with sites around the world. Avgol also has plants in China, Russia and South America. “The U.S. market is the biggest opportunity we have in a stable market,” he said. “This is the right strategy. You guys have really supported us.”

Davie Economic Developer Terry Bralley said Avgol bought the property off US 601 South when he thought it couldn’t be sold. It has expanded several times since then, and the new construction will include a footprint for a sixth production line. “We’re growing a great manufacturing base here,” he said.

Bralley said local and state leaders came together to support the project.

“Our the years, Avgol has added and added again,” said Mocksville Mayor Dr. Francis Slate. “We want them to keep growing. It’s good for them and it’s good for the town.”

“Their commitment is tremendous,” said Terry Renegar, chair of the Davie County Board of Commissioners. “The jobs are well paying. They understand what it takes to complete a deal and we were competing with the world.”

The state Rural Infrastructure Authority awarded the project a $220,000 grant for a rail spur line. The authority also provided $500,000 in an existing buildings grant.