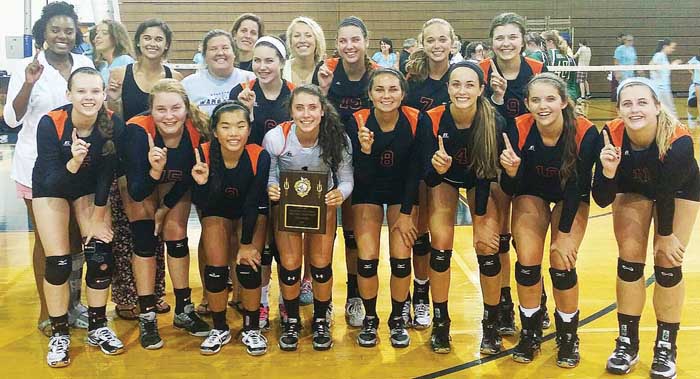 Davie’s varsity volleyball team opened the season with a forgettable 3-0 home loss to Carson. But it responded with a performance worth savoring – a triumph in the eight-team McMichael Invitational.

Before the War Eagles ran the table in pool play and toppled Page and Cresset Christian Academy on Saturday at McMichael High, they ran into a buzz saw to begin the season.

“I think Carson is a phenomenal team,” Brandon said. “But I also don’t think we showed them how good we are. Yes, we are loaded with experience, but we also have some young players – a freshman setter and a junior setter who had never played varsity. Nerves were high and then we took a loss in the first set that I don’t think we expected to take.”

Davie has lost seven straight to Carson, including 3-0 shutouts in 2012 and 2014. The good news is lessons were learned in practice the next four days.

“We all left, myself and the girls, in shock,” Brandon said. “Carson is a technically sound team. They have no big, dominant hitters, but they play such clean volleyball. That’s something we talked about Tuesday that we wanted to work on – covering every block and communication. Tuesday we had a really good practice. We worked on being more like Carson, which was a really positive thing for us.”

Sometimes a rainbow follows a storm. The way Davie responded from the humbling opener made the Carson match look like an aberration.

The McMichael Invitational began with pool play, and Davie went 7-0 to earn the top seed for the tournament bracket. Pool play was one set to 15.

“One reason I love that tournament is we get to play a lot of schools that I wouldn’t normally call and schedule a match with,” she said. “A big part of our practice on Thursday was playing games to five, so learning the value of if you make an error, you have to let it go and move on to the next play. I think Saturday it showed that they really took what we had talked about and put it into the games.”

Davie faced Page in the semifinals. When the War Eagles were running a 6-2 offense in the first two sets, they looked bewildered. When Brandon switched to a 5-1, they excelled.

“We had about a four-hour break between our last game in pool play and that match, and we came out really flat those first two sets,” she said.

The switch to 5-1 produced a dramatic U-turn. Davie won the next three sets, including a decisive 15-10 margin in the fifth set. Brandon marveled at her freshman setter, Lauren Grooms.

“Our 6-2 offense was not working,” she said. “We couldn’t get the ball moving fast enough. We decided to let Grooms run a 5-1 the rest of the match. It’s something we had never practiced. At the end of the second set, I asked Lauren: ‘Have you ever run a 5-1?’ She said: ‘Yeah, I can do it.’ That was a big moment for her to step up. We went with it and it worked beautifully.

“In the third set, it was like we got loose and everybody was talking. Everybody decided we didn’t sit around for four hours to play one match and go home. It was more of the team that I saw that morning (in pool play).”

The turnaround started with Grooms, but it didn’t end with Grooms. Seniors Hadley Hilton and Emily Ruble played invaluable roles.

“The team morale was kind of dying and two of the senior captains, Hilton and Ruble, fired everybody up,” Brandon said. “You could see it in their eyes that they didn’t want to let the team give up.”

Then there was senior Julia Grachen. At one point in the match, Davie had no answer for one Page server. Grachen solved the riddle.

“Page has a good server that messed with us in pool play and in the match,” Brandon said. “We were really struggling with her. The third senior captain, Grachen, is a defensive player and she’s taken the role of being the one who gets us out of trouble. So any time somebody was struggling returning a serve or on defense, I put her in that spot and she can do anything in regards to the back row. She dug us out of a tough serving streak from that girl and it was like everybody was revived.”

Davie jumped on Page from the get-go in the fifth set and rolled.

“It was a little nerve-wracking,” she said of the five-set battle. “Page is a really strong team.”

“We all decided we did not wait until 9 o’clock that night to go home in second place,” she said. “It was such a good day because you couldn’t give (MVP) to one person. I was thinking: ‘What if they ask me for a player of the tournament?’ They didn’t, thank goodness, because I had no clue who I would have given it to. Every single girl had a different role at different times.”

Notes: The War Eagles are off to a much better start than last year, when they opened 0-5 for the longest losing streak in five years. … Brandon’s starting lineup in the first week was Grooms at setter, Hilton at right side, Taylor Walton and Ruble at outside, Morgan Sessoms and Summer Bivins as middles, and Allie Cunningham at libero.