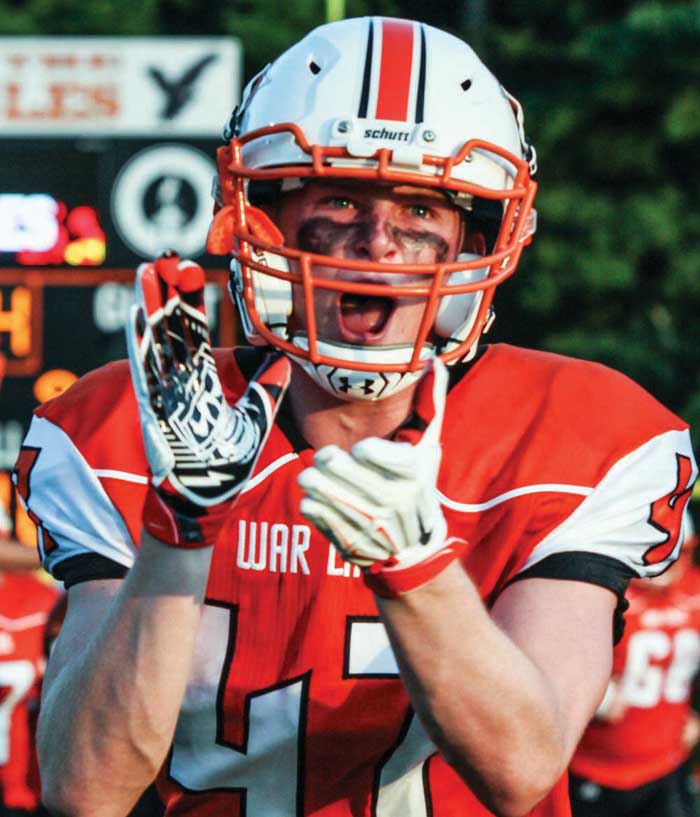 Jack Little gets fired up.

Page’s varsity football team brushed aside Davie like a Rottweiler brushing off a butterfly. A lot of times Jimmies and Joes do more than X’s and O’s, and the Pirates had superior athletes at virtually every position, crushing the War Eagles 53-22 here Friday in the season opener.

“We did a lot of nice things,” Page coach Kevin Gillespie said. “Our kids played great.”

In the first half, Davie quarterback Chris Reynolds threw for 197 yards and three touchdowns, and Ben Ellis had 189 receiving yards and all three TDs – yet the War Eagles trailed 46-22 at intermission because of three turnovers on their first three possessions, abysmal defense and botched execution on punt attempts.

Reynolds’ first pass was intercepted by Tarvris Martin, who made a tremendous play on a deep ball. Seven plays later, on second-and-20, Javon Leake broke a tackle in the backfield and sped 46 yards to the end zone.

Reynolds’ second pass was intercepted when Mile Faison jumped the route and took the pick 24 yards to the end zone.

Then Stephon Dalton eluded serious trouble in the backfield and fought for first-down yardage – only to fumble near the end of the play. On the next play, Page QB Will Jones connected with a wide-open Faison for 52 yards and a 21-0 Page lead just six minutes, 11 seconds into the contest.

After the rough start, Reynolds put together a fine effort, even though he was running for his life all night.

“At the beginning of the game, bang, bang and we’re down real quick and that’s hard to come back from,” Holman said. “Not only turnovers, but we had a total disaster on our punt team.”

The Reynolds-to-Ellis combination offered hope, if only briefly. Ellis’ diving catch for 13 yards gave Davie its initial first down, and two plays later, Reynolds stepped up in the pocket and found a wide-open Ellis at the Page 24. Ellis strolled to paydirt for a 66-yard score. Reynolds, the holder on extra points, had trouble with a low snap, so he stood up and completed a two-point pass to Cooper Wall to cut the deficit to 21-8.

The Pirates, who scored on four of five first-half possessions, went 80 yards to extend their lead to 28-8. Leake broke a 34-yard run on third-and-15, and Diondre Overton caught a 33-yard TD with 62 seconds remaining in the first quarter.

“Early and often, we’ve got to get off the field on third downs,” Holman said.

Page fumbled a punt at midfield and Davie’s Avery Williford recovered. Going for it on fourth-and-2, sophomore Curtis Gray picked up a bad snap and sliced 8 yards. Then Ellis beat one-on-one coverage down the left sideline, resulting in a 34-yard TD. Young’s extra point pulled Davie within 34-15.

Sophomore linebacker Cody Hendrix chased down Jones and sacked him 12 yards back, Page punted and Reynolds hit Ellis again, this time for a 67-yard score. Ellis hauled it in at the Page 36, got downfield blocking from Wall and juked the last defender at the 10. The hole was trimmed to 34-22 with 2:46 remaining in the half.

“He’s good,” Gillespie said of Ellis. “I mean he’s real good. The move he put on three of our guys down there was special. We knew they could throw the ball. (Reynolds) did a great job of eluding the rush and our guys gave up, thinking he was going to be sacked and their receiver got behind us. We’re young in the secondary.”

Page registered its sixth and seventh TDs in the final 2:28 of the half. Wide open down the middle, Faison caught a 42-yarder, and Jeremy Level blocked a punt in the end zone and Faison fell on it for a TD. Page’s kicker missed four PATs in the half, but it hardly mattered at 46-22.

Displaying exquisite balance in the opening half, Jones went seven of nine for 154 yards and three TDs, while Leake ran seven times for 116 yards. Overton is a 6-5, 195-pound receiver who has narrowed his list of colleges to Clemson, Tennessee and Nebraska. On the rare occasions the Pirates struggled, it was usually due to penalties.

“(Leake) is special,” Holman said. “They’ve got a couple receivers who are special. We couldn’t get any pressure and we couldn’t stop the run inside. We have to move our guys up front and try to plug the gaps.”

“Oh, we’ve got a great group (of receivers),” Gillespie said. “All four of them can make plays.”

While Reynolds absorbed countless blows, Jones had all kinds of time to throw and barely broke a sweat.

“Those guys up front did an excellent job,” Gillespie said. “What we saw on film is they got pressure on the quarterback in the scrimmage. We worked on that all week because I was a little bit concerned going in. But our guys did a great job picking it up.”

After a 10-TD first half, the second half was uneventful. The teams traded punts during the third quarter. The only second-half score was the result of another botched punt attempt by Davie. Young picked up a low snap and took off from the end zone, getting spilled at the Davie 3. Leake went in untouched and Harrison Kiser ended his streak of missed extra points to cap the scoring at 53-22 with 11:37 to go.

Davie even unraveled from the Page 1. After Gray reversed field and scampered 28 yards, Reynolds hooked up with Wall for 46 yards. A bad snap resulted in an 8-yard loss, then came a 19-yard holding penalty. Young was set to try a 41-yard field goal, but a low snap ruined that.

Davie’s run game was nonexistent (38 yards on 33 attempts). The consolation was the passing game. Reynolds threw for the 12th-most yards in a game (280). Ellis, who had a record 253 receiving yards in last year’s loss to West Rowan, now has the second-most receiving yards in a game at 200 as he made eight receptions. It was the seventh 100-yard game of his career – one from the record.

“Reynolds is doing exactly what he’s supposed to do,” Holman said. “He’s leading the team. He’s going to fight until the bitter end. We’ve got to protect him better. He took way too many shots. We’re going to work on fixing that, too.

“I’ve said it time and time again: (Ellis’) knowledge and hands are just amazing. We’ve got to keep him healthy, too. He’s going to do what he’s supposed to do on Friday nights. When the lights come on, you can count on Ben Ellis.

“We’ve got to get everything working up front, and then the offense is going to have a chance to be successful.”

Notes: Gray made an impression in his varsity debut, running for a team-high 37 yards on five carries. “It’s hard to get that cat on the ground,” Holman said. “He’s very elusive and fast. He’s got a low center of gravity. When it all looked like it was about to break down, he was able to reverse the field and get major yards.” … Davie’s defense played much better in the second half as Page’s only points came on a very short field. “We went into halftime and made some adjustments,” Holman said. “More than anything, it was gut-check time.” … Senior safety Williford had a team-high 10 tackles. Junior linebacker James Boyle and Hendrix had eight each. Sophomore linebacker Broc Barnette had six. Hendrix and Barnette each had three tackles for loss and a sack. … Davie’s o-line was missing one starter, sophomore Zach Clubb. … Davie and Page have alternated wins since 2011; Davie won 45-40 last year. … Davie set a dubious record, allowing the most points in 60 season openers. The old mark was a 45-7 loss to North Iredell in 1989.