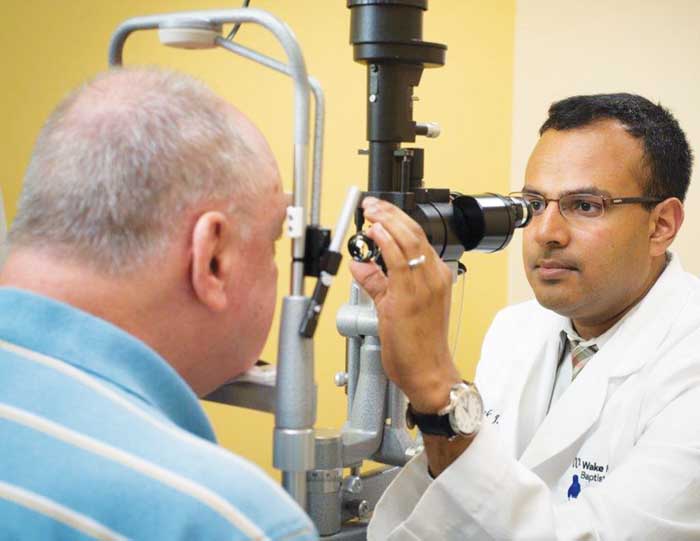 As a commercial trucker, having good eyesight was crucial for Larry Meadows.

In retirement, he found it to be just as important, and so when he started getting what he calls “blebs’’ on his eyes, or “little spots,’’ he knew he needed help.

Meadows, who lives in Advance, was referred to the care of Vishak John, M.D., a Wake Forest Baptist Health – Davie Medical Center ophthalmologist who specializes in problems with the retina, the larger part of the eye behind the lens, cornea and iris.  John diagnosed Meadows with a retinal vein occlusion, a blockage in a small vein that carries blood away from the retina, in his left eye.

Fortunately for Meadows, a new type of treatment for his occlusion allows a drug to be injected into the eye to restore sight.

“The vision was literally disappearing from my left eye,’’ Meadows said. Now, with the injections he gets every six weeks, Meadows is able to watch movies and television, and do most everything he did before. As for receiving an injection in the eye, “It’s not as bad as you might think it would be.’’

John also provides this treatment for one of the most common retina problems he treats at Davie Medical Center. Macular degeneration, an aging-related disease, is the loss of eyesight caused when new blood vessels grow in the retina and leak, damaging cells and creating blind spots. In the past, a diagnosis of macular degeneration usually meant permanent eyesight loss was inevitable.

Now, there are treatments for both types of macular degeneration, dry and wet.

John said that dry macular degeneration, which does not include bleeding, is often difficult to detect because there are no symptoms. The disease doesn’t show up until people are in their 60s or 70s and commonly runs in families. People who have a parent with macular degeneration should begin to get regular checkups for it early, John said.

Wet macular degeneration causes instant vision loss in the center of a patient’s eye, but not complete darkness, John said.

The injections given to people like Meadows help restore vision and have few side effects. The goal is that patients receive the injections at gradually increasing intervals until they no longer require them at all to maintain their vision.

John, a Wake Forest University undergraduate, was recruited in 2013 to become one of the region’s few retina specialists. He became interested in eye surgery with a retina specialization while on rotation in medical school at Boston University. John received additional years of training at the Bascom Palmer Eye Institute in Miami, a hospital affiliated with the University of Miami that has long been ranked as the top hospital for ophthalmology in the country.

One of the things John enjoys most about being a retina specialist is the fact that looking into the retina can help reveal other problems.

“The beauty of the retina is it offers direct access inside your body. It’s the only place where you can see individual vessels and cells (without open surgery),’’ he said. “It’s a window to the soul.’’

Davie Medical Center has become a popular choice for people with eye issues because of its easily accessible location and parking. John is the only retina specialist between Winston-Salem and Hickory with a regular clinic.

Meadows said ease of access and a warm, caring staff are two reasons he doesn’t mind his eye injections.

“I enjoy coming here,’’ he said. “And one of the reasons is because of Dr. John.”