Speaker talks about ‘the heart of the volunteer’ 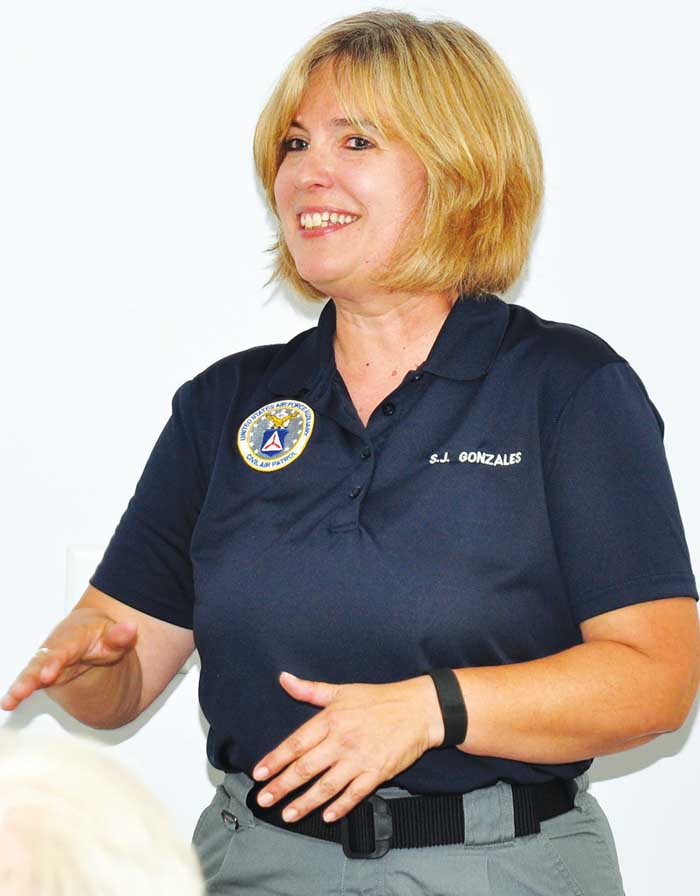 Her topic was “The Heart of the Volunteer.”

“CAP was birthed from the heart of volunteerism at a different time, 75 years ago. It is as valuable to our civilian culture as anything is.  60,000 people nationally volunteer for CAP,” she said.

She asked if anyone had heard the statement “just a volunteer” and posed the question for pilots, “do you preflight a plane differently if you are a professional, or a volunteer?”

Gonzales gave an example of how to give 100 percent in all endeavors.

Several years ago, she was working with cadets and had a particularly challenging cadet, Lucas Elliott, that “was a difficult young man who wanted to shoot guns.” She worked with him as best she could, but after about a year in CAP, he chose to leave the squadron.

Several years later, Gonzales was at an event when she was tapped on the shoulder by a tall young man in an Army uniform, who she did not recognize. He identified himself as Lucas Elliott, and asked if she remembered him.

He said “Are you proud of me?”

Six weeks later, she learned he was killed in action. Gonzales told his mother that whenever she had an opportunity to speak in public, she would tell his story so that he was never forgotten. “You have to give it your all, because you never know,” Gonzales said. “CAP is an opportunity to change lives and make a difference, and we do this as volunteers.”

After watching live events unfolding during 9/11, her 13-year-old daughter turned to her and said: “I want to make a difference. I want to be a part of the solution.”

Shelley researched volunteer opportunities and discovered the CAP website. She and her daughter joined together, and Gonzales has been volunteering for CAP since then.

As a faculty member and teacher at the NC Leadership Academy, Gonzales shared some experiences with students. The goal of this charter school is for students: “to have the opportunity to develop true leadership qualities and become creative thinkers and problem solvers while retaining a sense of responsibility for their families, their community, and their country.”

Two days before her talk, Gonzales had returned from nine days at the NC Wing Encampment. Thirty-five cadets from the NC Leadership Academy squadron participated in encampment. “I told their parents- I am not bringing back what I took. The experience of encampment is going to change them.

This was her challenge.

The Sugar Valley Composite Squadron hosts speakers monthly on topics of service and leadership open to the community; directions and contact information are available on the squadron website.