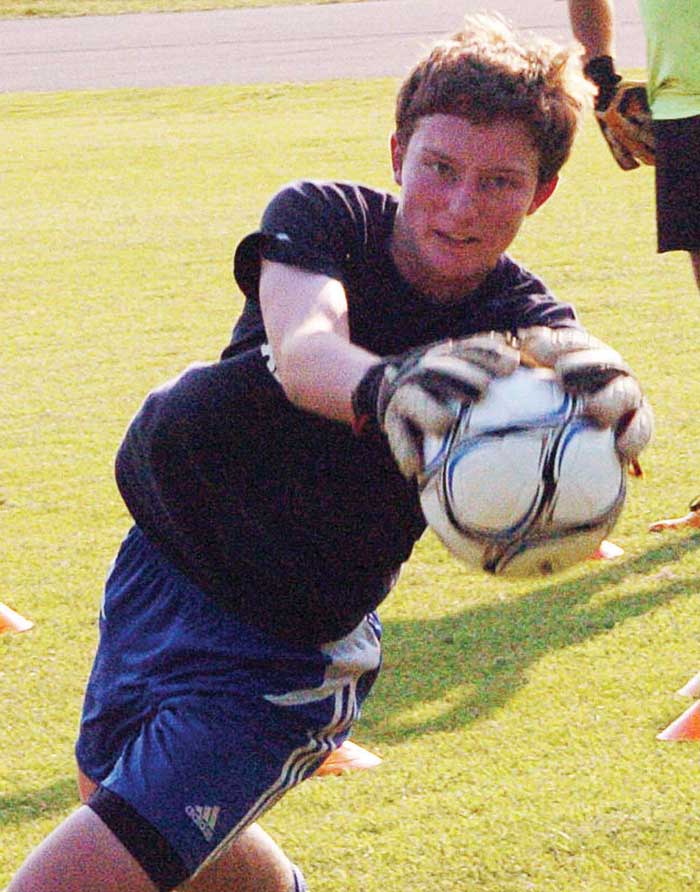 A Davie High soccer player hones his skills at an early practice.

But 2015 could be a different story. With the 20-man roster consisting of 13 seniors and seven juniors, the War Eagles could be primed to exorcise some demons.

A whopping 56 guys tried out for the varsity and junior varsity teams. Coach Andrew Davis kept 24 on the JV.

This is McKnight’s second stint as coach, although the first one was as an emergency replacement as an interim coach. In 2012, Lance Everette left for North Iredell Middle with Davie’s record at 6-3. When McKnight took over, his first game was the Central Piedmont Conference opener. He certainly knows what it’s like to be in a CPC dogfight. He was in a bunch of them.

McKnight went 1-5-4 while finishing out the year – all in CPC play – but with any luck at all it could have been a Cinderella season. The War Eagles lost 2-1 to Mt. Tabor and 1-0 to Reynolds before defeating Reagan 3-1. Then came four straight ties – 0-0 with West Forsyth, 1-1 with North Davidson, 3-3 with Tabor and 2-2 with Reynolds. Then came three painful losses – 1-0 to Reagan, 2-1 to West Forsyth and 3-2 in overtime to North Davidson.

“Those (ties) went 110 minutes,” he said. “That’s a long season when you have that many ties. A couple bounces here, a couple bounces there and those four ties could have been four wins. There’s a rule change now. Now we have shootouts in conference, so there won’t be any ties.”

McKnight is the 11th coach in the 28-year history of the program. He replaced Kenneth Ham, who guided Davie for two years.

But McKnight is optimistic about an upswing. Among the reasons to believe in the War Eagles are Isaac Campbell (forward), Andrew Whitesell (defender), Austin Naylor (defender) and Josh Harper (midfielder). All four are fourth-year varsity players.

“We’re senior heavy, but we’re going to be counting on some juniors to step up like Duncan Curll, Eric Rodriguez, Kevin Alas and Ricardo Mojica,” he said. “They will get a lot of playing time.”

Harper is going to be the key to the offense.

“I think most of the offense is going to run through Harper in the middle,” he said. “We’ll go to him and he’ll distribute the ball. I envision it being a lot like it was three years ago when I coached and I had two good guys up front – we get the ball up to them and they make things happen.”

Foster Johnson and Corbin Kopetzky are vying for the goalie job. “Corbin also plays defense, so he’ll have a field number and a goalie number,” he said.

Whitesell and Naylor will anchor the back line. Two spots around them “are up in the air,” he said.