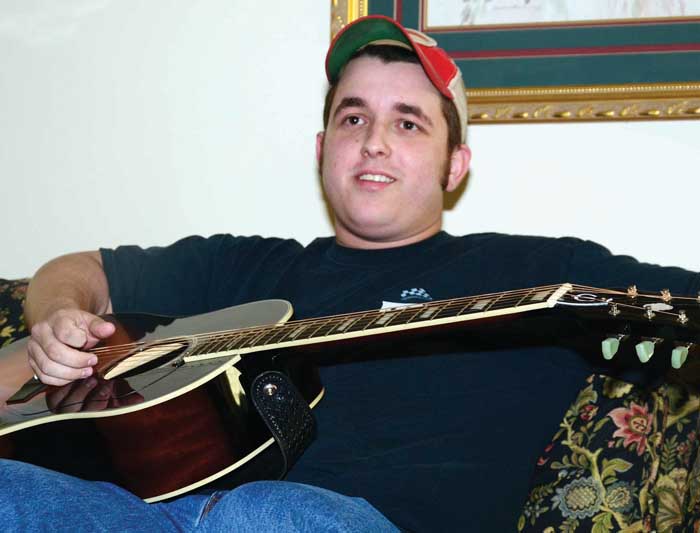 Sam Foster is a budding pilot and songwriter.

She’s got an evil heart

and she feels no pain.

I told her I loved her

and she left me in the rain.

Sam Foster will never be accused of being too loud or too talkative. In fact, he’s pretty shy.

That is, until he has a guitar in his hands.

The young singer-songwriter from Advance has been playing guitar since he was 4, when his dad, Garry (His mother is Anne), bought him a little guitar from a pawn shop. Garry remembers a picture he took of Sam, in his footed pajamas playing Heartbreak Hotel on that little guitar.

Elvis might have been his idol when he was 4, but by 15, Sam was into heavy metal and as he says, “screaming Christian music.”

Garry chimes in, “Then when he turned 16, he got his hair cut short and regained his redneck status.”

Sam describes his musical style as Americana. His voice has a little grow, his dialect is distinctly Southern, and most of his lyrics, he said, are about girls.

Garry is quick to comment, “Yeah, he dates a girl one time and she won’t go out with him again so he writes a song.”

Two jobs, one at Dynamic Airways in Greensboro (Sam wants to be a pilot, like his dad), and the other at Food Lion, leave little time for music, but Sam still manages to play often, and thanks to James Vincent Carroll, a friend and professional recording artist, he has gotten some exposure playing in venues.

“I want to make sure people know how much James has done for me. I can’t thank him enough for all he does. He and I have recorded five demos,” Sam said.

The two met last year when Carroll, who also lives in Davie, was playing at an Advance bar and grill. Sam was playing his music that night and Carroll was scheduled to play after him. Sam said he noticed Carroll standing nearby and listening, and when he finished, Carroll told him he could play his breaks wherever and whenever he wanted.

“So I follow him around and play his breaks,” Sam said, with a laugh.

His goal is simple: to be able to fly around and play music. He has his private pilot’s license and is building training time to earn his commercial pilot’s license. Weekend nights find him at clubs and restaurants, picking up gigs when he can. He is scheduled to play at J. Butler’s in Winston-Salem Aug. 22 and Sept. 5. Maybe his playlist will include “Evil Heart,” or a more positive one he wrote, “Roll with the Punches,” about life and letting things go.

Sam is available to play at almost any gathering or venue, and his website is www.samfoster.bandcamp.com.