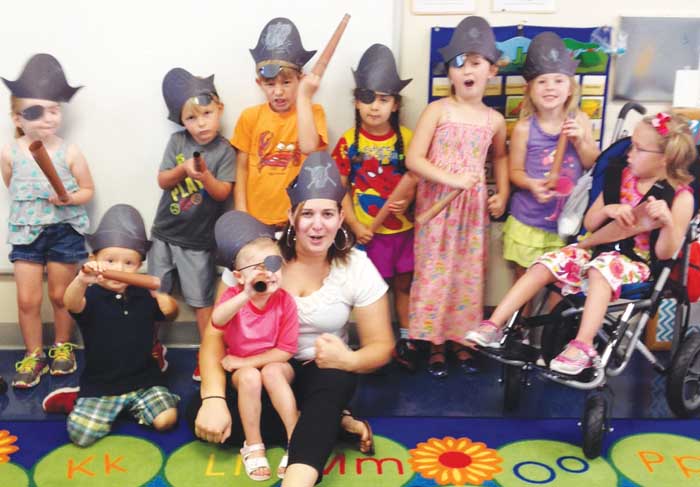 Students in the Central Davie Pre-School summer program enjoy dressing as pirates as they learn about the ocean.

Each week, a theme leads to activities helping children develop new social and emotional skills, as well as language, fine motor, math and science skills. Critical thinking skills are taught through play, which enhances a new sense of creativity.

Students experienced ocean week, when they learned about marine life, the ecosystem and how they work together. They made friends and formed teams during this study.

They were in awe when they learned a whale’s tongue can weigh as much as an elephant, and when they discovered that the Great White Sharks all have 300 teeth, which regrow when broken. They used the facts to learn math.

The students lit up when they realized they were making ocean bottles using sand and shells. They learned about the shells’ textures, forms, colors and shapes.

Some were excited to look for shells when going on vacation.

Ocean Week transformed into Pirate Week, when students made their own pirate gear consisting of patches, telescopes and hats. They learned that boys and girls can be pirates and that pirates make their own maps when sailing.

They learned pirate words and created treasure maps before being taken on a global awareness adventure. The maps allowed them to find hidden treasure on a scavenger hunt around the school.

Children age 2-6 are invited to the programs. Contact Kay Ashley or Tammy Naylor.