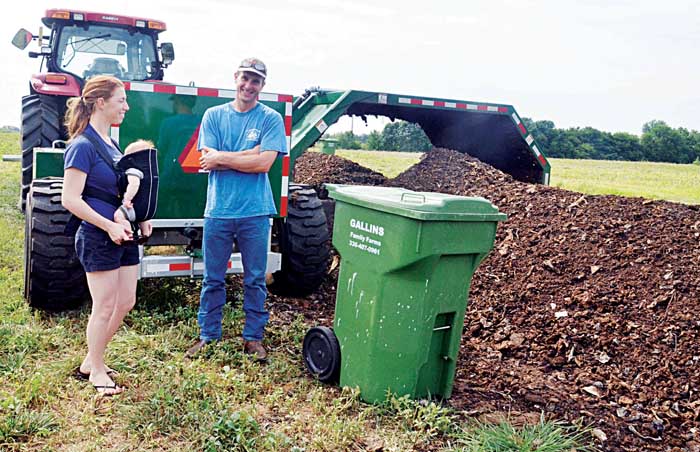 Lyndsy and Pete Gallins and son Michael at their composting operation off Farmington Road.

It’s a little mind boggling to think that a big pile of garbage can become something beneficial, and for some people, it might not be the most exciting topic, but Pete Gallins gets pretty animated when asked how compost is made.

In fact, Gallins went to college at the University of Wyoming to study business, but an agriculture class provided an “aha” moment, when he realized studying crops and soils was way more interesting.

After earning a degree in agronomy, Gallins moved back east.

He grew up in food service, bussing tables, and working in cafeterias and on vending machines with his family’s business, Gallins Foods. He saw firsthand the enormous amount of food waste that ended up in landfills, and when he had the opportunity in college to be part of a composting project, an idea was born.

Gallins and his wife Lyndsy bought the Reavis farm off Rocky Dale Lane in Farmington. Their modest white farmhouse sits on a knoll at the farm, where chickens, goats, cats, and a dog share the 150 acres with the newest Gallins, 3-month-old Michael.

Under an enormous pecan tree is where the couple married. Barns and a milking parlor dot the property, and at the bottom of the yard, 500 feet from the house, is where Gallins makes compost.

Gallins explained about how organic material – food waste, napkins and paper goods – is broken down by microorganisms, a process that takes four to six months. The food waste is trucked into a shed on the farm; material that is not compostable is separated. The waste that will become compost sits on a concrete pad for a short period of time until it reaches an optimal temperature and is moved to a field a few feet away.

The rows of waste are turned periodically by a windrow compost turner that Gallins was able to purchase after being awarded a grant by the NC Recycling Business Assistance Center. The turner makes the work faster and helps control odor, Gallins said. It is one of the few newer pieces of equipment Gallins owns; most of what he uses is old dairy farm equipment that he has modified for his use.

“This is a pretty low-tech operation,” Gallins said.

Once the process is complete, the end result is Carolina Dynamite Compost, a fine, rich, organic compost that sells for $8 a bag. It is available at a few Winston-Salem area retailers, and Gallins sells it at the farm. He has also donated bags to community gardens.

The compost is so rich, he said, that it only takes a small amount worked into soil to produce healthy, beautiful plants and flowers.

“In some ways, it is a complete fertilizer,” Gallins said, referring to the multitude of micronutrients that are present in the compost.

It’s not a big operation.

Gallins and Lyndsy are two of the three-man team, with Lyndsy doing billing and paperwork, Matthew Polivka driving the dump truck and Gallins handling everything else. The waste comes from various places, including Catawba College, Wake Forest University, Forsyth Country Day School, Summit School, the North Carolina School of the Arts, Salem College, and VF Jeanswear in Mocksville. Keeping the food from ending up in dumpsters at those sites provides a cost savings to them, as the dumpsters do not have to be emptied as often, so the benefits are fiscal and environmental, Gallins explained, adding he hopes Davie leaders will realize the potential for savings for county sites, including schools.

The business is permitted through the state Department of Environment and Natural Resources and is subject to random site checks throughout the year, to make sure they are complying with what Gallins calls strict state guidelines on odor and water runoff.

In 2014, the business was recognized as Green Business of the Year by the Piedmont Environmental Alliance, for diverting 850 tons of food waste from the landfill.

Taking food waste and converting it into compost that can be used to grow more food means a circle has been completed, and Gallins is happy to be a part of that process while providing an income for himself and his young family.

“We like it here; we like our neighbors. Slowly and steadily, our business is growing. There’s no secret to success; it’s just hard work,” he said.