A review of Davie winter sports 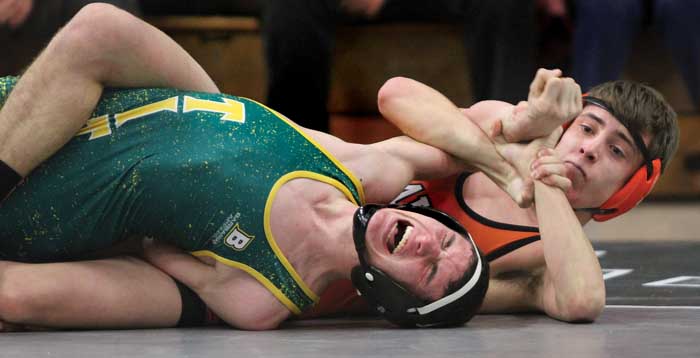 Year In Review: This is the second in a three-part series, looking back at the 2014-15 school year. This is a recap of highlights from the winter season. Next week: The spring season.

• Going into the Davie wrestling season opener against Alexander Central, who could have imagined James Moore stealing the show in the final – and decisive – match of the night?

Moore, an unheralded freshman heavyweight, delivered a 36-30 victory in an electrifying opener. The year before, Moore was a 220 backup at North Davie. But man, did he bust out of obscurity.

“I was scared,” Moore said. “I was thinking: ‘Oh crap, I’m going to get pinned and let my team down and myself down.”

The Davie gym became a madhouse when Moore turned the opponent to his back. Then the referee slapped the mat. “I heard all the cheering in my headgear. It hurt my ears but I loved it.”

• Freshman Cooper Wall of Davie’s varsity boys basketball team made a strong statement in his high-school debut, scoring a team-high 21 points and sparking an 80-68 win over Forbush. “Considering it was his first time out, that’s pretty impressive,” coach Mike Absher said.

• Wrestler Parker Correll (220) put up an early exclamation mark by destroying a tough opponent from Carson, winning by technical fall over Anthony McCurry.  Later in the week, Correll marched to second in perhaps the strongest regular-season tournament that you’ll find – the Southern Slam in Greenville, S.C.

• After the 21-point debut, Wall scored 21 again in a 79-64 loss to Alexander Central. Nic Starnes matched his career high with 20.

• In the Central Piedmont Conference opener for the Davie varsity girls, Madison Zaferatos had a robust line (22 points, eight rebounds, six assists) in a 60-49 win at Reagan. “She does it from everywhere – transition, 3s, mid-range,” coach Dave Ruemenapp said.

• Cory Heiner of Davie’s JV boys looked Dennis Rodman-esque in a 51-48 win over North Iredell. The relentless hustling machine with an uncanny nose for the ball had 24 rebounds to go with 18 points. “His motor will outwork anybody,” coach Bruce Wallace said.

• Davie wrestling captured the 18-team Tab Thacker Memorial at West Forsyth, beating the arch-rival Titans by one point. Bailey Ingram (145) was the star at 3-0.

• In the Robert Sawyer Invitational, Davie swimmer Nick Sinopoli broke the school record while placing second in the 100 back.

• Zaferatos made the all-tournament team in the Sam Moir Christmas Classic by scoring 50 points in three games.

• Jordan McDaniel of Davie’s boys made all-tournament in the Moir. He scored a career-high 20 points – with three 3-pointers and six rebounds – as No. 6 Davie upset No. 3 Mooresville 66-55 in the first round.

In the first minute of the third-place game, Davie was dealt a big blow when Starnes suffered a season-ending broken hand. The junior point guard was the team’s top scorer at 12.8 ppg.

• Correll accelerated his big season with a 4-2 comeback win over Parkland’s Thomas Rodriguez. Correll bumped up to heavyweight to face the defending 4-A champ at 220.  He was 0-3 in previous matchups with Rodriguez, and he fell behind 2-0. Then he responded with four unanswered points. “We didn’t dodge him,” coach Buddy Lowery said. “We wanted to find out what Correll could do.”

• Will Shepherd of Davie’s JV boys hit a magical 3-pointer at Reynolds to erase a deficit and send Davie to the signature win of the season to that point, 53-50. With Davie trailing 50-48, Shepherd pulled a 3 that had Wallace thinking: “No, no, no.” Lo and behold, the shot swished. “He caught the ball two or three steps out from NBA 3-point range,” Wallace said. “I didn’t want that shot, but he hit it.”

• An unbelievable wrestling match at West Forsyth ended with Davie on top by an eyelash, 31-27. Preston Beauchamp became the toast of town by narrowly surviving a double-overtime showdown for all the marbles. But he couldn’t have lifted Davie without help from seven victorious teammates: Josh Lankford, Kyle McCune, Isaiah Olmedo, Correll, Lake Billings, Thad Vandiver and Daniel Wilson.

“It was very nerve-wracking,” Billings said.

Hollywood couldn’t have created a better script – Lowery and his 154-5-1 CPC record against West coach Maurice Atwood and his 391 consecutive wins (a national record in all sports). Lowery and Atwood had 1,241 wins between them. Atwood suffered his first defeat in seven years.

“I was so tired,” Beauchamp said. “I was intense. I was nervous. I wanted to break (Atwood’s) streak.”

“Everybody knew what was at stake, and maybe we had a little more oomph,” Lowery said.

• The varsity boys got the monkey off their back, obliterating Parkland 86-47 for their first CPC win in two years. Heath Slabach hit five 3s and scored 21 points. McDaniel had 15, Wall 13 and Dylan Shoffner 12.

• Swimmer Jacob Sink had a head-turning win in the 100 breast, beating Reagan’s Paul Neil, who finished third in the state last year.

• When Davie’s boys beat West Rowan 59-51, Wall was critical to the outcome, scoring 11 of his team-high 16 points in the fourth.

• A 46-44 win over Reynolds was a continuation of never-ending excitement for Davie’s JV boys. Shepherd had 17 points and four 3s. At the end, Heiner blocked a 3-point shot and Broc Barnette chased down the loose ball.

• When you glanced at Heiner’s stats in a 44-38 comeback win at West Forsyth – 30 points and 39 rebounds – you rubbed your eyes in disbelief. The 5-10, 130-pounder fueled a comeback from 15 down. “If everyone went wide open like Cory, we wouldn’t have to worry about coming out and looking flat,” Wallace said.

• Getting 16 points from Cameron Tabor, the JV girls avenged a loss and held on by a thread over Reynolds, 40-38.

• Finding a way to pull out the kind of game that had eluded them for many years, the varsity girls beat Mt. Tabor for the first time in 12 years, 48-41.

Led by Zaferatos (14 points, seven assists), Peterson (11 points), Hampton (10 points) and Joyner (11 rebounds), the War Eagles stopped a 21-game losing streak to Tabor and cemented the highest CPC finish – second place – in 10 years. “We just made up our minds that we weren’t going to lose this game,” Ruemenapp said.

• In the final game, the JV boys had one more memorable moment in the tank as it stunned Tabor 58-56 in overtime. The Spartans were 11-0 in the CPC. At 11-10, Davie achieved the most wins in seven years. “No one would want to play us if we had a conference tournament,” Wallace said.

Heiner had six of Davie’s 11 OT points and finished with 24. “It was just Cory being Cory,” he said.

Davie doesn’t prevail without Shepherd, who had 14 points and hit an OT 3 that pushed the lead to five. “He’s a clutch player,” he said.

• In the state swim meet, Sink placed ninth in the 100 breast and set a school record at 58.64. “Had Jacob been in the championship heat, he would have finished sixth,” coach David Koontz said. “Man, was his swim impressive.”

• In the Midwest Regional, wrestlers Wilson, Correll, Billings and Ingram placed in the top four to qualify for the state.

• Correll’s dream of winning the state at 220 was crushed in overtime in the semifinals. “Parker would beat that kid eight out of 10 times, if not nine,” Lowery said.

Correll pulled himself up by the bootstraps and salvaged third by recording his third and fourth pins of the weekend. “It was tough, thinking I should have been in the finals,” he said. “Can you come back from losing like that? So yeah, I wanted to go out there and get third.”

• Getting 14 points, eight rebounds and six assists from Zaferatos and 11 points and 11 boards from Joyner, Davie’s varsity girls beat Porter Ridge 51-34 for their first playoff win in 10 years.

In the second round at McDowell, Davie was undone by early foul trouble and lost 65-53. Joyner (15 points, 15 rebounds), Hampton (11 points, 17 rebounds) and Zaferatos (10 points, nine assists) kept Davie around.

Even with the second-round exit, the season couldn’t have been much better. At 18-7, Davie enjoyed the most wins in 12 years.