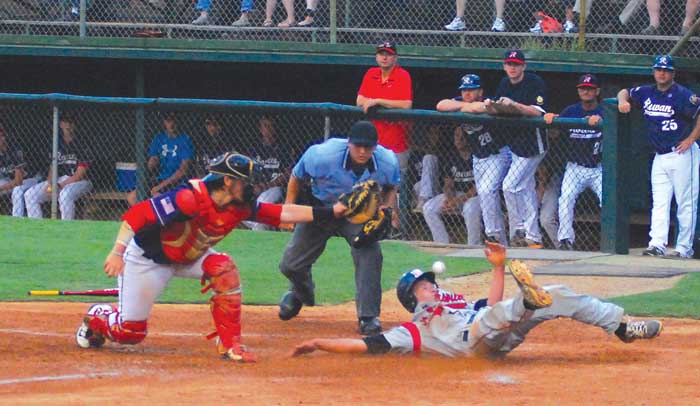 Neil Hutchins scores as the Rowan catcher drops the ball in game one.

Even as Rowan County piled up three straight wins in yet another postseason disposal of Mocksville’s legion baseball team, the series never felt like a runaway.

Mocksville lost game one 4-3. It was darn close to winning game two before falling 7-3. It jumped out to a 3-0 lead in an eventual 14-4, seven-inning defeat in game three on July 8.

Game three was marked by coach-umpire disputes, with Mocksville assistant Denny Key getting dumped and head coach Charles Kurfees making frequent trips on the field to yell at umpires.

“When you have a bunch of teenagers playing nine innings, you’re going to see some crazy stuff,” Rowan’s Heath Mitchem told the Salisbury Post. “And we sure did.”

“It was a sweep, but it was a really weird sweep,” Rowan’s Harrison Baucom said. “We didn’t have any rhythm throughout the whole series, but that’s what makes it so humbling.”

Sawyer Davis missed the entire series, standing by his father’s side during an illness. Neil Hutchins, who was an amazing 10 for 15 during the playoffs, was out of town and had to miss game three. Kurfees put Ross Hoffner in Hutchins’ spot behind the plate, and he moved Jalen Scott to Hoffner’s position at second base.

“I said: ‘Sawyer, don’t worry about playing baseball. Be with your daddy,’” Kurfees said.

In the third, Rowan erased Mocksville’s 3-0 lead and forced a tie. Michael Caldwell blew through a stop sign at third and scored Rowan’s first run on a play at the plate that brought out Kurfees for the first time in a series of arguments. Center fielder Muchukot threw to Scott, who relayed the ball to catcher Hoffner.

“It wasn’t even close,” Kurfees said. “The boy jumped over the bat and Ross actually tagged him twice – front and back. I went off. How I didn’t get thrown out, I don’t know.”

“You have to take what they give you,” Rowan coach Jim Gantt told the Post. “For us, I think the key was being patient. We had to wait for our opportunities.”

An infield popup fell between three players. A bunt down the third-base line loaded the bases. Another bunt was errored and extended the inning.

When the base umpire ruled that Wilson didn’t secure a throw at first, Rowan led 5-4 and Key was thrown out. Kurfees came out to argue. He wound up protesting the game, then decided to drop the protest.

“Wilson took about three steps and dropped the ball,” Kurfees said. “Key jumps up and goes to the third-base line. Before Key could say anything (the base ump) threw him out.

“I said: ‘What did you throw my assistant coach out for?’ He said the assistant coach can not come out on the field. I said: ‘Really? When did that all of a sudden become a rule? Show me in the rule book. OK, the game is under protest. Let’s get this paperwork going.’”

Later, the umps let Kurfees know that Key was ejected for arguing. Now Kurfees was seething.

“Then they said they’re throwing him out because he argued,” he said. “I said: ‘I’m going to drop the protest, but now I’m going to let (Key) argue. I went back out there and said: ‘Now let’s talk about the call at first.’ Somebody said they timed the argument at close to 30 minutes.”

The bottom fell out in the fifth, and Rowan scored the game’s final run in the seventh on a one-out passed ball. It was over via the mercy rule.

“(The fifth is) when we fell apart,” Kurfees said. “We dropped a fly ball and didn’t cover a bunt. Things rolled downhill.

“If we lose, that’s fine. But there was no sense in this. That took us completely out of it. I’m not normally one to talk about umpires because I know it’s a tough job.”

Bradley Dzeskewicz, who made his team-high 14th mound appearance but only his second start, took the loss. He was chased after four innings, just short of his longest outing (4 2/3) on June 18.

Jones and Wilson made their fourth and second relief appearances, respectively, but they didn’t fare any better than the starter as Rowan blended 12 hits with nine walks. Meanwhile, Rowan starter Hunter Shepherd went 5.2 innings to maintain his spotless record (5-0).