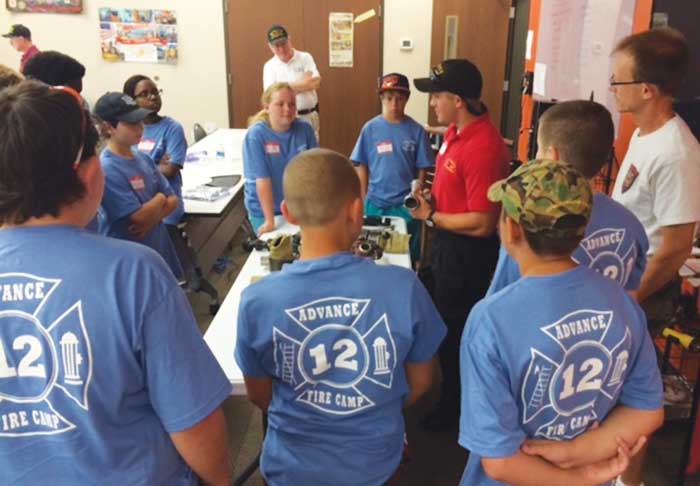 ADVANCE – Despite the blistering heat, 13 youngsters had a cool time at the Advance Fire Department’s 3rd Annual Fire Camp June 22-24.

The fire station’s outside thermometer reached 104º and some activities were moved to the air-conditioned old stationhouse or under the shade trees at the Advance Methodist.

“They were very engaged and participation was great. In fact, several showed interest in joining our junior firefighter program.”

One highlight was a simulated four-wheeler accident. Campers used their new training to take cervical control of the “victim,” stabilize him, immobilize him on a backboard, place him in a Stokes basket and carry him to an ambulance.

Another favorite was “saving the baby.” In full turnout gear and SCBAs the campers crawled blindly along a floor searching for, finding and rescuing a “baby” which used to be a doll.

The campers took turns manning charged fire hoses, they rose 85 feet up in the aerial ladder of Truck 12 with Advance Assistant Chief Will Holt and veteran Firefighter Jamie Hoffman and they got to ride in a fire truck.

“They quickly learned that no fire vehicle moves an inch until everyone is safely belted in,” said Robertson.

Paramedic Joe Ashburn taught CPR and Paramedic Roy Mojica made them familiar with  the equipment on the Davie EMS unit.

Pete Ressa of the Davie County Rescue Squad taught them how to immobilize a patient and use a backboard.

C.J. Dwiggins, assistant chief of the County Line Fire Department, showed them how to use the self-contained breathing apparatus  and Advance Firefighter Ryan Turner showed the campers how to use ropes, knots and fire extinguishers.

Assistant Chief Art Mote and Tony Collins, retired Statesville fire captain, showed the mechanical advantage of using ropes and pulleys to move a 150 pound tire which, of course, no camper could move before the demonstration.

N.C. Wildlife Officer Kenny Osbourne brought his boat along and instructed the campers in water safety. Bradley Collins, a lifeguard at Tanglewood Park, schooled them in swimming rescue techniques.

Another popular feature was the automobile driving simulator provided by Davidson County Community College. This let the youngsters get safely behind the wheel years before they are eligible to take the driving test.

At the graduation picnic the campers dazzled an audience of about 60 family members and friends with displays of knot tying, CPR, bandaging, donning turnout gear and SCBAs, hooking up a hydrant and manning a live fire hose.

Advance Fire Chief Rodney Miller congratulated the graduates and presented them with their Fire Camp certificates.