New life for an old mill 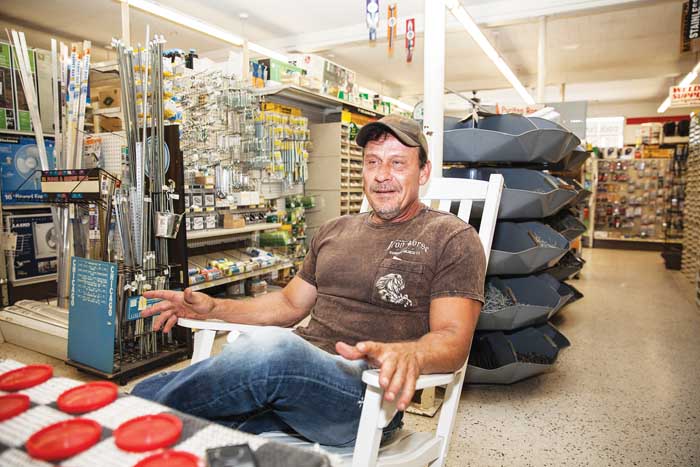 COOLEEMEE – Some residents here had big plans for the former mill property along the South Yadkin River – retail shops, condos and more – a total refurbishment.

Town officials even got grants to help pay for studies.

The mill was sold, and new owner Breck Bullock is starting a business there. He is also the owner of the Cooleemee Hardware Store at the shopping center and of South Yadkin Power, which generates power from the river at the back side of the mill.

Bullock is originally from Greensboro, but has lived in Woodleaf area for approximately 20 years.

He said the previous owner of the mill had called him several times over the years about purchasing the property, but Bullock had never considered it until recently.

The previous owner was required by his insurance company to demo certain parts of the property or repair it because it was heavily damaged, so since he wasn’t interested in spending a dime on either, he called Bullock again.  This time they worked up a deal – some $600,000 for the property.

The mill isn’t being used for any purposes but Bullock plans to open a recycling service.

Called Waste Industry Network, it will be a sister company to his other business called Global Salvageable Network, which is a metal processing facility in Lincoln County. He has a partnership in both companies.

Global Salvage can take a car at one end and in a few minutes it comes out on the other end in pieces as big as your fist, he said. The machine separates all metals and plastics.

The company hopes to offer a service to help with recycling.

“We met with Ingersoll Rand and our goal is to make companies like Ingersoll  Rand become 100 percent landfill free.”

Bullock says Ingersoll Rand doesn’t have a lot of waste but what they do have will be collected, sorted and put in the right place. The process would be taking all the cardboard, plastic and foam.

The mill will be a transition point for recycling.

“We don’t just buy the plastic or pick up the plastic and sort it, but we will granulate it and get it ready for the extrusion process, which is the same thing we do with metal. “

Food products will be in sealed containers and pig farms will get that, he said.

“We will be the first certified CND, concrete and demolition facility, in North Carolina.  If you are certified the state knows that you are disposing of the material properly. It’s coming this way, it’s really big up north.”

The processing will not generate noise or smells, he said. The part that was demoed recently will have an 80,000 square foot concrete slab. The rest will be inside the mill and passers by will not be able to know of the existence of the facility from the front side of the mill, he said.  “Whatever I do will be a neat facility.”

“Our goal in five years is to hire just under 50 employees.  With Cooleemee having less than 1000 residents, if all are hired from Cooleemee, 50 is a pretty good percentage.”

Bullock says when he started building the power plant at the mill, he was focused ondoing just that. Even though he knew several people in the town, it wasn’t until he bought the hardware store that he got to know many who live here on a more personal level.

“Recently, Mike Garner (county recreation director)  reached out to me as a goodwill gesture and we discussed South Yadkin Power’s donation to the park.”

Five hours a day on Saturday and Sunday water will be coming over the dam, if the water is there.

It meant a lot to Bullock that Garner took the time to come and talk with him about the park. Bullock isn’t always aware of events going on in Cooleemee and he appreciated Garner’s conversation.

Bullock is fully aware of the groundwork that has been done to the mill, including the $300,00 state grant that prepared the mill for investors.

He said the previous owner and he agree this would not work in Cooleemee. Location is a key element for success.

Bullock has seen millions invested in old mills that were turned into beautiful establishments, and within a year have grass taller than a man with only one person living there to oversee the property.

He made specific reference to a small town 16 miles from Atlanta, Ga. After $68 million in taxpayer money, it fizzled.   “It’s a small town with one stoplight.” He was aware of this project because it includes a hydroelectric power plant.

The mill was about half the size of the mill in Cooleemee. Within one year all the stores closed.

“As a business man, I wouldn’t invest in it.”

Bullock said the new recycling facility would take up about one third of the mill.  He has some ideas about the other third but is not sure of it’s future yet. The other third, located on the south end next to the bridge, is up for sale.

The white building out front was used for offices and Bullock plans to use it for the same purpose.

“We like Cooleemee and we want Cooleemee to thrive. We are pretty well vested here. We are here to stay for a while.”

Between Bullock and his wife Betty, they have eight children including one adopted child.

When asked what he would want people to know about his characterr he said he had always thought of putting on his tombstone:  “He might not have made it but he sure died trying.”

I asked him what was his definition of finally making it: “I’m 54 and I average 80 hours a week.  I’ve done it since I got out of college.

“Finally making it would be being successful in my relationship with God first, then my family and business; that’s complete success. That’s how I try to live my life. Anybody that knows me, anybody that comes in here will tell you I don’t slow down.

“Right now I have seven businesses that I’m part of or own. It just takes all my time.”

Not only does he have the business in Lincoln County and two in Cooleemee, he has two other hydroelectric power plants.

He business owns Cycle Social Rehab in Greensboro is a school for the mentally challenged.  It has 11 vans and buses that go out every morning to pick the clients up and they arrive to classrooms like school.  A big recreation center including a gym provides even more. The state uses the facility as a prototype, he said.

Bullock says it’s really neat to see the transformation that takes place with the clients in a mater of couple months. The clients come in withdrawn and talking little, but through socializing and being with other people, it helps them to open up and have a fuller life.

The recycling facility in Cooleemee hopefully will be up and running for operation within 90 days, in which public notices will go out for employment applications.