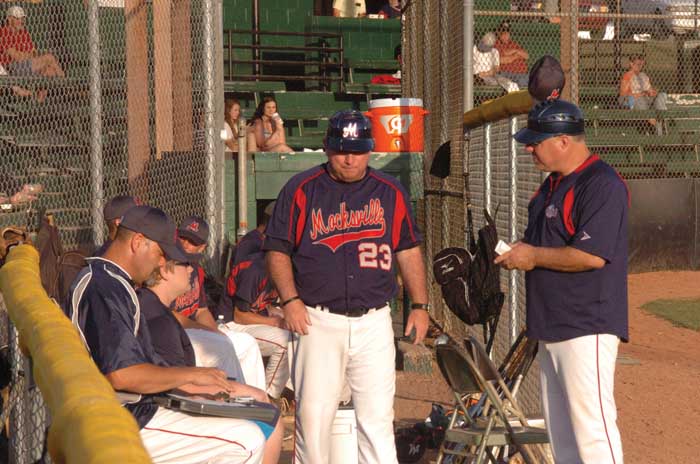 The regular season ended June 30, weather permitting. But it feels like it’s just beginning for the Mocksville senior legion baseball team. A four-game winning streak has rebooted the whole sense of who this team is and what it can be.

Mocksville rallied past host Kannapolis 12-6 on June 25. Three days later, it dispatched Concord 8-4 on the road for records of 7-14 overall and 5-6 in Area III. It didn’t enjoy a winning streak before this uprising.

“We’re on what you call a winning streak,” coach Charles Kurfees said. “We’ve got our lineup like we want it and we’re hot.”

Explain the late-blooming ways of this Mocksville team.

At Kannapolis, Mocksville put up 12-plus runs for the third straight game. Kannapolis fell to 8-13, 4-7 in the first meeting between the teams since 2012.

Mocksville’s three pitchers offset seven walks with 13 strikeouts. Brett Fulk was uneven for five innings, as he walked six but fanned eight. Colby Cranfill picked up the win with two strong innings in which he walked none and struck out three.

Two days after getting his first win at Kernersville, Cranfill squared his record at 2-2.

Bradley Dzeskewicz closed with two scoreless innings as Mocksville held Kannapolis to eight hits. It was the lefty’s 10th appearance in 20 games.

Mocksville trailed 6-4 going into the seventh. When the inning ended, it was 10-6 good guys.

Muchukot singled. One out later, Barrett Hennings and Jones had back-to-back walks. On the first pitch to Davis, he launched a grand slam to center field. That gave Mocksville an 8-6 lead.

“When he came to the plate, I told those boys on the bench: ‘It’s time for Sawyer to hit one. He hasn’t hit one all summer,’” Kurfees said. “He hit one to dead center field right in the net. He crushed her. Last year he had a heck of a batting average, one of the top batting-average guys of all time.”

Davis’ .425 average in 2014 ranks seventh on the all-time chart. “When he hit the grand slam, you could just see them wilt,” Bumgarner said.

Overfelt and Scott followed with singles and both came around to score as Mocksville rushed to the 10-6 lead. It cruised home from there.

Mocksville’s mood has turned to the point that players were disappointed they couldn’t get on the field to practice the next day because of a junior league game.

Kurfees raved on and on about Scott (.307). He played second earlier in the week and third in this one. Not only is he hitting over .300, he’s logged 31.1 innings in three starts and five relief stints and posted a respectable 4.88 ERA.

“Let me tell you who’s the most improved player in Davie County – bar none,” Kurfees said. “It’s Jalen. He turned a nice 5-4-3 double play. He made every play and he was smooth. I can’t believe how much he’s improved. He puts the bat on the ball and his pitching, my gosh, we’ve thrown him against the best teams. I mean we haven’t thrown him against any dogs. He’s gone up against High Point, Rowan and Randolph County.”

On Sunday, Mocksville picked up its fourth win in six days, beating Concord 8-4 on the road. It was the first meeting of the season. Lowly Concord fell to 2-16, 2-10.