Softball eliminated in second round 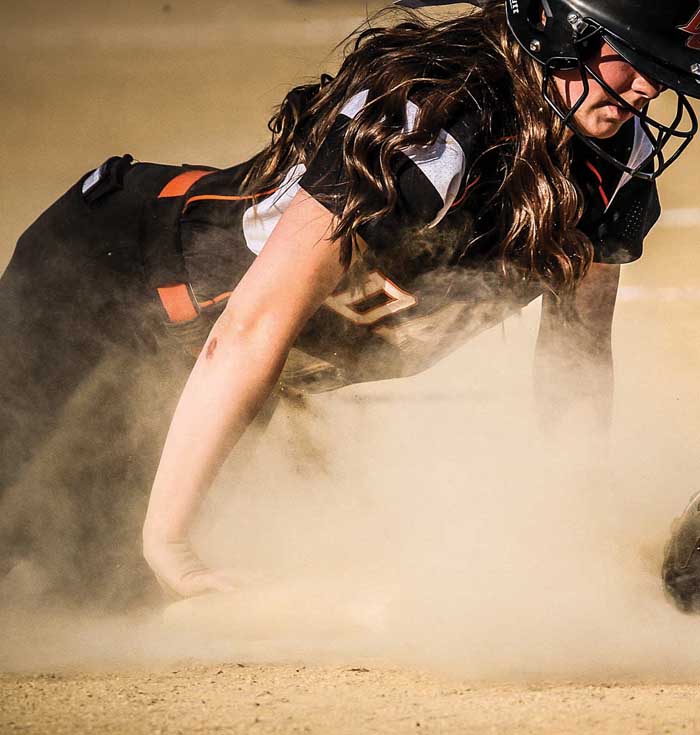 Sophomore Makenzie Smith stirs dust as she reaches base safely.

For a while, Davie’s softball team was in a serious struggle at Ardrey Kell in the first round of the 4-A playoffs.

Things changed. The top of the fifth was a thing of beauty. The War Eagles scored six runs on three hits, two errors and a walk and defeated the Knights 6-2.

Davie, however, was ousted in the second round, losing 11-0 at South Caldwell.

But Ardrey Kell put up a fight.

“I was definitely worried when it was 1-0 and we hadn’t had many base runners, especially since I called time and discussed a situational play that we didn’t execute and a run scored,” coach Dawn Lowery said.

Davie solved Ardrey Kell pitcher Stirling Strickland in the fifth. K’lea Parks led off with a single. Katelyn Webb hit a fly to left that should have been caught, but it dropped in. With one out, Barneycastle singled, Bridgett Tierney reached on an error, Makenzie Smith walked and Sarah Myers plated one with a ground out. The big blow was a two-run single by Jessie Beck. That proved to be Davie’s final hit as Strickland retired the final seven War Eagles.

Davie pulled away even though Ardrey Kell had more hits overall (7-6).

“I think the fifth-inning burst came from getting the jitters out of the way, adjusting and just finally putting the ball in the holes,” Lowery said. “We had a few line drives that (were caught earlier). If those were poked a few inches left or right, we would have scored earlier. We emphasized to keep putting the ball in play and make them make the plays. That’s what we did in the fifth.

“Parks, Barneycastle and Beck came up with some hits that put us on top. Any given day, we could have someone different come through. That’s what I think gives us an advantage. It’s a confidence-builder in the whole team to know that anyone that steps in the box is capable of giving us a spark.

“My one complaint is that we didn’t come out and set the tone early. Their pitcher was nothing spectacular. She threw strikes but didn’t have a lot of movement or offspeed. We should have come out quicker and scored more earlier. Mentally, we have to develop a killer instinct. We have to find a way to be a threat from the first pitch.”

After Gough pitched four innings, Boger was tough in relief, throwing three scoreless innings with no walks and retiring the last five batters.

“I was pleased with the pitching,” Lowery said. “Gough and Boger both did a great job. Boger had that fire in her eyes again. She was focussed and had a whole lot of nastiness going on out there.”

Davie’s third trip to face the Charlotte school was the charm. Ardrey Kell eliminated Davie 6-5 in 2012 and 6-1 in 2013, both times in the first round.

“It was nice to leave there with a win,” Lowery said. “The last two trips were disappointing because both times we felt like we were better than that team. It made for an even longer bus ride home. They have a great facility and it’s fun to play there. We went there and got the job done.”

To put it kindly, Davie played badly in the second round, losing 11-0 in five innings at top-seeded and unbeaten South Caldwell.

South scored four second-inning runs to put Davie in a 5-0 hole. Adding insult to injury, the Spartans put up a six-spot in the third.

Davie had more errors (three) than hits (two). South banged out nine hits and made one error. Tierney (1 for 2) and Sierra Ferguson (1-2, double) had Davie’s hits.

The Spartans did their damage against Gough and Myers, although only four of the runs were earned. Boger’s dominant relief pitching – 1 1/3 innings, no hits, no walks, four strikeouts – was too little, too late.