Officers learn to deal with the mentally ill 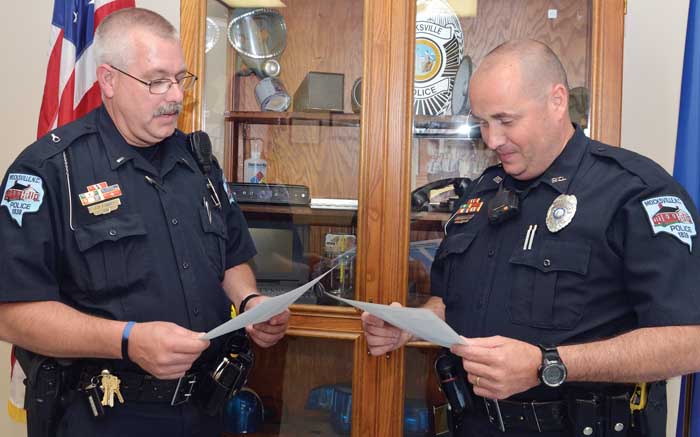 Police officers are accustomed to answering a variety of calls, from reports of erratic drivers to cows in the middle of the road, but when they answer calls related to people having mental health crises, their responses have to be tailored to those events.

That’s where CIT comes in.

A year before that, the son of the president of the National Alliance on Mental Illness (NAMI) in Memphis was in crisis and was transported to the hospital in a police car, because the ambulance wouldn’t take him, and a fellow NAMI member who had to call the police when her seriously mentally ill son was having a crisis was shocked when they showed up with their hands on their guns and billy clubs because they weren’t sure how to deal with the boy. The two women became part of a taskforce that was geared toward improving police interactions with mentally ill people, and the first CIT training program was completed in 1988.

According to CenterPoint Human Services, approximately 10 percent of calls involve someone with a mental health illness, and in the past, if officers responded to a call with a person in the throes of a mental health breakdown or episode, often those people were put in jail so they would not be a danger to themselves or others.

But officers such as Lt. Jeff Finney and Officer Christopher Hefner have received training that will help them prevent crises or de-escalate a crisis when it occurs.

In all, eight Mocksville police officers have gone through the 40 hours of training to help them deal with a special population and two more will soon be trained.

Finney said in his career, he has dealt with people suffering from schizophrenia, delusions, Alzheimer’s, PTSD (post-traumatic stress disorder), and bi-polar disease. Dementia is also an issue Finney has dealt with, both in his job and personally, as his father is suffering from it.

“In people suffering from dementia, the safety of the person, safety of others and safety of property is what we are concerned with. Many times these folks can not only be physically and verbally abusive, but they can also be easily abused physically and verbally by others. They are often neglected, can easily be conned, and tend to wander from home, so these are all issues we are confronted with when we answer a call that deals with someone with dementia,” Finney said.

He remembers one call in particular that dealt not with dementia, but PTSD.

“I got a call about someone in the graveyard who wanted to cut himself. I ended up having to chase him, and after I got him and took him to the hospital, I sat and talked with him and after that he was fine. It turned out he was suffering from PTSD, and often with those situations, if you can just get the person somewhere by themselves and speak to them in a normal voice, you can help them work through whatever is going on at the time,” he said.

Hefner said every situation is different, and the training helped teach him the skills needed to deal with a variety of situations.

One benefit of the training is rather than arresting people who are in a crisis, officers have the ability to assess the situation, which often ends in the transport of the individual to a hospital that can then refer them to agencies designed to deal with their needs.