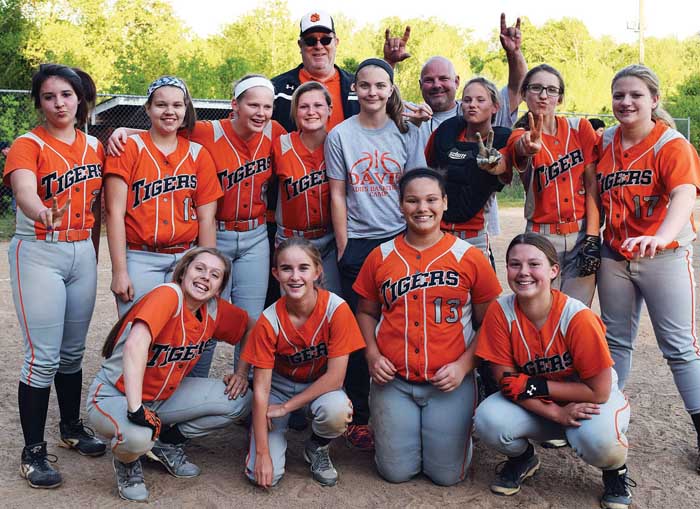 The thought of sweeping a doubleheader from North Davie seemed pretty far-fetched for Ellis’ softball team.

• North mauled Ellis 19-4 in the first meeting in the second game of the season for both teams.

• Ellis was 2-7 with three losses to South Davie.

• North was 5-4 with a 1-2 record against South, but the one win ended South’s perfect record.

In a breathtaking reversal of fortune, visiting Ellis squeezed past North Davie 4-3 in game one of the doubleheader. Winning game two seemed like too much for Ellis coach Shannon Wood to ask, but the Jaguars turned the trick again by a score of 4-2.

The major reason for the sweep was Lindsey Dingler, who had the game-winning hit in game one along with pitching two complete games. She did not pitch when Ellis was drilled 19-4 by North.

In the bottom of the fifth, Caitlyn Sechrist led off with a walk. Sara Reagan singled and Sechrist stole third. Dingler delivered a walk-off win with a bloop single over the third baseman’s head.

Avery Parrish pitched a complete game for North, which got a single and triple from Desiree Lewis. North got one hit from Emme Chamberlain, Parrish (double), Kayli Murphy and Aisulu Ball.

In game two, the Jaguars rode a three-run first to the 4-2 win. It was 3-2 before Ellis tacked on an insurance run in the top of the fifth.

“Our defense was pretty strong,” Wood said. “And Reagan was probably the most consistent at the plate.”

North’s Parrish pitched five innings in relief and only allowed one run. Abbey Custer led North with two hits, including a double. North got a double from Murphy and singles from Chamberlain, Lewis, Ball and Abbey White.

The Jaguars (4-8) closed with a painful 8-3 loss at Starmount. They were ahead or tied the entire game until the bottom of the sixth, when Starmount scored six runs to erase Ellis’ 3-2 lead.

After starting 9-0, South Davie’s season ended on a sour note, dropping its second straight with a 4-1 setback at Forbush.

The Falcons (11-1) led 1-0 through four as South held them to four hits. But two singles and an error helped Forbush extend the margin to 4-0 in the fifth. South (9-2) avoided the shutout by scratching out a run in the seventh. Sydney Wyatt singled and scored on Easton Johnson’s hit.

Johnson had two of South’s four hits. Abbey Whitaker and Wyatt had one each. Wyatt also had seven assists at shortstop. But South was undone by four errors. Rachel Bostic pitched well for five innings, and McKenzie Tomberlin threw a perfect sixth.

“They made the routine plays and we didn’t,” Kenney said. “Bostic pitched well enough to win again. We didn’t hit the ball. We started hitting the ball in the last inning, but it was too late. We just got beat by a better team.”

“I couldn’t be prouder of the girls,” Kenney said.