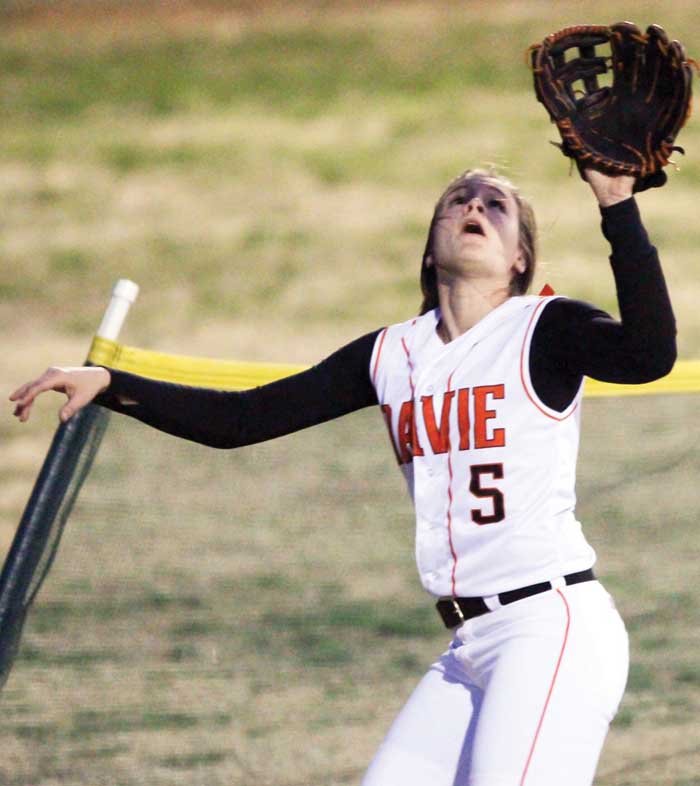 The War Eagles outhit North 10-8. Both teams made one error, so both were solid defensively. McKenzie Barneycastle (2-3, RBI, triple) and Katelyn Webb (2-4, two RBIs) had two hits each and six more War Eagles had one hit apiece. Julie Gough pitched five effective innings.

But one little thing was Davie’s big downfall: It stranded 10 runners, and that’s the biggest reason second-seeded Davie lost 4-3 to No. 3 North. The game was held at West Forsyth.

It was a big loss because if Davie would have protected a 3-1 lead against North, the door for a CPC championship would have been wide open. No. 4 Reagan pulled off an enormous upset in the semifinals, beating No. 1 West Forsyth 2-1. The War Eagles would have faced an 11-8 Reagan in the final while seeking their first CPC Tournament title since 2001, and Reagan has not beaten Davie in 12 all-time meetings.

Instead, North beat Reagan 2-0 in the championship game. As a result, Davie dropped from a two seed to a three for the 4-A playoffs. That meant a first-round road game instead of playing at home.

“I thought we played well overall,” coach Dawn Lowery said. “I felt like we were in control the entire game. When we matched them in (the early going), I think they realized we came to play. We just left too many runners on. Our focus and intensity were there. We were just one clutch play away.”

In the first round, Davie buried No. 7 Parkland 15-0 in four innings. Davie only needed an hour to record its 10th straight win.

But in the semifinals, Davie’s longest winning streak in 14 years died because it left runners all over the place.

North used two hits to take a 1-0 lead in the top of the first, but Davie forced Blakely Thrower to throw 25 pitches in the bottom half. On a 3-2 pitch and the seventh pitch of the at-bat, Barneycastle tripled to left-center to lead off the Davie first. The next batter, Bridgett Tierney, reached on a fielder’s choice when the third baseman fielded her bunt and looked to third. She wound up throwing it away. Tierney raced to second and Lambros called time to visit the circle.

“For the first time in a while, the heart of our lineup didn’t produce,” Lowery said. “I think it was just one of those fluke things where all three of them were off. They will come back, and hopefully come back even stronger.”

Davie pushed across the tying run in the second. K’lea Parks led off with a solid single to center. Webb followed with a line drive to right. Anna Devereaux punched a hit over the third baseman’s head, loading the bases with one out. Barneycastle drew a fullcount ball four to tie the game.

Davie took control with a two-run third. After Sarah Myers led off with a sharp single over third, Jessie Beck got a bunt hit. Both runners advanced on a strike three in the dirt. Then Webb looked like a strong candidate for player-of-the-game honors when she delivered a two-strike, two-run single up the middle. She drove a changeup between the shortstop and second base.

“We can use this game to build on instead of harp on,” Lowery said. “We have been playing some really good ball and this game wasn’t any different. It should project us into the playoffs. Should we have won? Yea. But hopefully we realize we should have won and were totally capable of winning.”

Third baseman Beck snared a screamer to end the North fifth and preserve the 3-1 Davie advantage. But Davie let it slip away in the sixth, mostly due to self-inflicted wounds.

With runners at second and third and no outs, Lowery summoned Olivia Boger from the bullpen. Boger was ready for the challenge. On her first pitch, she coaxed a comebacker, looking back the runner at third and getting the out at first. Shortstop Parks got the second out, and it was still 3-1 in Davie’s favor.

Davie, though, was doomed by a pair of pitches that went to the backstop. North scored twice – with two outs – on wild pitches. A single past third sent North in front 4-3.

Davie didn’t give up. In the sixth, Sierra Ferguson led off with a walk. One out later, Barneycastle pulled a hit between first and second. The bases were juiced when Tierney walked. But Davie came away empty-handed when the next two batters struck out swinging against reliever Carson Pace, who picked up the win with four overpowering innings.

After Davie banged out nine hits and three runs against Thrower, it managed just one hit and three walks against Pace, striking out 10 times.

In the seventh, Pace struck out two before getting a popup to first. That was that.

“Pace came in and shut the door,” Lambros said. “She’s a gamer and she did what she’s done all year. Blakely was doing well, but we thought we needed to make a change.”

“I give credit to Pace,” Lowery said. “She had ice in her veins. She was making a statement for sure.”

The War Eagles, who split with North in the regular season to beat the Black Knights for the first time in 35 meetings, slipped to 17-7. The Knights (18-5) only mustered three hits, but they scored twice in the first inning and beat Reagan 2-0 in the championship game.

Gough appeared poised for another signature win before receiving a no-decision. She scattered six hits, walked none and allowed one earned run. Myers, the second reliever, pitched 1 1/3 scoreless innings.

“Gough pitched a great game again,” Lowery said. “She has really stepped her game up the second half of the season. I’ve been really proud of her. She gets in game mode and nobody messes with her. She’s maturing as a player and it’s been fun to watch.”

Now Davie will try to bounce back from a tough loss and make a run in the 4-A playoffs.

“Our hope is that the girls will use it as fire,” Lowery said. “If we’re going to make a run in the playoffs, we’ve got to believe we’re going to upset some folks and that our three seed is not indicative of our talent.”