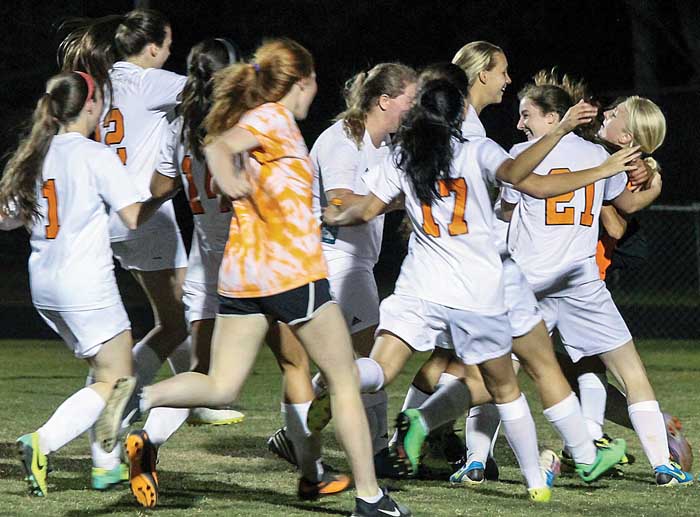 This is an up-from-oblivion story.

The Davie varsity soccer team had lost six of seven, with the lone win being against last-place Parkland. Vultures were flying around the War Eagles. With North Davidson and Mt. Tabor coming up in the final week of the season, they seemed to have fallen with no way to get up.

Then, out of nowhere, the War Eagles rose into the spotlight. In an unbelievable closing push, they beat North Davidson (3-0) and Tabor (1-1, 4-2 shootout)

Never mind that Davie suffered a sixth straight losing season. This is memorable stuff. North was 12-5-1 overall and 6-4 in the Central Piedmont Conference. Davie completed a season sweep after failing to beat North in 2011, 2012, 2013 and 2014.

On Senior Night against Tabor, the War Eagles soaked in a moment they wondered would ever arrive. It was the first win over the Spartans in 19 years.

Davie’s season is over – it tied Tabor for fifth in the CPC, and thus failed to make the playoffs – but talk about producing hope for 2016.

“It was an amazing feeling to beat Mt. Tabor and North Davidson,” coach Kerstin Steinour said. “We have been working so hard to be competitive in this conference and we have shown that we can. We are going to greatly miss our (five) seniors, but we look forward to what next year brings.”

At home against North, the War Eagles proved the 1-0 overtime win in the first meeting was no fluke. Claire Devereaux provided the game-winning goal in Welcome, and the junior opened the scoring in this one three minutes into the game.

Faith Bokeno dribbled down the left side and crossed it to Devereaux, who knocked in the first of her two goals.

Later in the half, Melani Anderson sent a beautiful long ball on a free kick to Jessica Navarro, who converted to make it 2-0. It was the sixth goal for Davie’s No. 2 scorer.

At 71 minutes, Devereaux added insurance with her team-high 14th goal on a penalty kick.

North dropped to 12-6-1 overall and 6-5 in the CPC. Davie’s goalie, junior Mary Tellup, was brilliant.

“We played very well,” Steinour said. “We were aggressive, passing was great and the girls were moving and communicating well. Tellup had some amazing saves that helped us shut out North.”

There’s more to this remarkable surge. When Davie prevailed in a shootout after 100 minutes of fierce back-and-forth play against visiting Tabor, the War Eagles celebrated in dog-pile fashion, sharing hugs and raising their arms in triumph – a moment nearly two decades in the making.

“During the two overtime halves, I felt we dominated the field most of the time,” Steinour said. “When it came time for the shootout, we were ready. We have been practicing penalty kicks since the last time we played Tabor, and I felt confident that we could take them this time.”

Junior Emily Muchukot provided a huge lift at 15 minutes, scoring the game’s first goal. It was her second goal of the season, the other coming against Parkland. Allie Carter’s long ball toward the goal set it up. It rebounded off the keeper and Muchukot was right there.

“We practiced and practiced finishing,” Steinour said. “Emily did exactly what we have been practicing. We started the game strong and dominated most of the first half.”

Tabor responded in the second half, and it was still 1-1 after 80 regulation minutes and 20 minutes of overtime.

“The second half was not as good,” she said. “Our girls were sluggish for the first 30 minutes (of the second half). During that time, Tabor scored off a corner kick.”

In the shootout competition, Devereaux, Stroupe, Hedgspeth and Muchukot scored in succession. Tabor made its first two attempts, but Tellup blocked the third try and Tabor missed the fourth.

It was over. Katelyn Hernandez didn’t even have to shoot. It was time to celebrate and savor a landmark moment.

“What a game,” Steinour said. “When we realized how much time was left (late in the second half), we started to play much better. We were a lot more aggressive and started moving the ball well again.”

The toppling of Tabor evoked memories of the only other win in the series, a scintillating 2-1 overtime decision on eighth-ranked Tabor’s home field in 1996.

Davie, which was 0-9 in the series at the time, parlayed Melissa Agrillo’s two goals with Roxanne Steele’s 13 saves.

“It’s taken us five years to do this,” coach Pete Gustafson said at the time. “It was a dream of mine to walk across the field and shake hands on the other end of the score.”

“I’ve never seen (Gustafson) so pumped,” sophomore Jodie Stone said then. “He ran across the field with his arms up.”

“It was the finest goal you’ll ever see in high-school soccer,” Gustafson said. “I’m not exaggerating, the goalie reacted after the ball went in the net. It would have gone 40 yards. It was a highly-skilled rocket.”

“It was very intense,” Gustafson said. “This is a big step for our program.”