Couple exchanges vows in the clouds 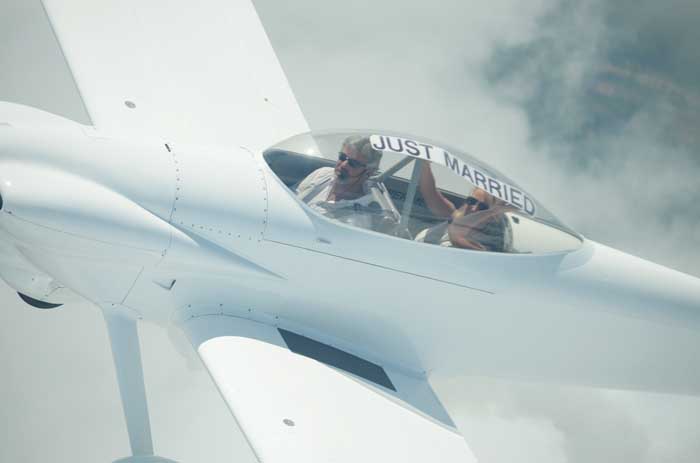 ADVANCE – “You may now roll your bride.”

Bill Englert would have rather had a kiss. But when he married his new bride Sheryl – that wasn’t possible.

They were in cramped quarters.

The two flying enthusiasts got married in an airplane – not just any plane – but “Casper,” an RV-4 that Englert had built. It has two small seats, one in front of the other. And Englert was the pilot of the plane.

The pastor, also a pilot, was in another plane, but as a passenger. Mothers were in yet another. The photographer had to have a plane, as well.

“When we were done, we couldn’t kiss each other,” he said. “The pastor said, ‘Now, roll your bride’.”

The roll is a manuever with the plane. Under Englert’s guidance, Casper not only flies fast, but can do aerial acrobatics.

The couple met about five years ago, and Sheryl was there for Casper’s first flight soon after that. She caught the flying bug quickly, and is now taking lessons.

“This is our life. We live here at the airport and we do a lot of flying – a lot of day trips,” she said.

They became engaged two years ago, and then Bill said “let’s get married on a plane.”

The couple wasn’t even sure it was possible, but they started making calls.

One of the first was to the pastor/pilot. “He said, ‘That’s pretty cool’,” Bill said. “Then it was game on.”

They enlisted other pilots at Twin Lakes to help get the wedding party into the air.

The week before the wedding, it rained every day. Things weren’t looking too promising on Saturday morning, April 18, either. Just before the 11 a.m. scheduled take off, the skies cleared enough.

The five planes took off, and headed toward Davidson County before turning around.

“As we came back across Twin Lakes, the preacher said: ‘We are gathered here in formation today’. We said our vows and exchanged rings,” he said.

All was being done through headphones. About 30 people on the ground could hear the ceremony over a loud speaker.

“By the time we were done, we were on the other side of Farmington,” he said.

They came back to the airport, trailing smoke and showing off Casper’s abilities. On the ground, cans were added to the back of the plane and he did a tire “burnout” on the asphalt.

“It was quite an experience,” she said. “We had one window of opportunity. It cleared up that morning and by the afternoon, we couldn’t have flown. It was like everything fell into place.”

They soon joined family and friends at Classics in Bermuda Run for a reception. The restaurant – where she worked part-time – was where they first met.

He works in aircraft maintenance in Greensboro and has been flying since age 15. She is a teaching assistant at Shady Grove Elementary.

They fly often, all around this area and sometimes to a destination for a day.

Chances are you’ll find them in their spare time in the air or at the hangar at Twin Lakes, where Bill is building another plane and where Casper is parked.