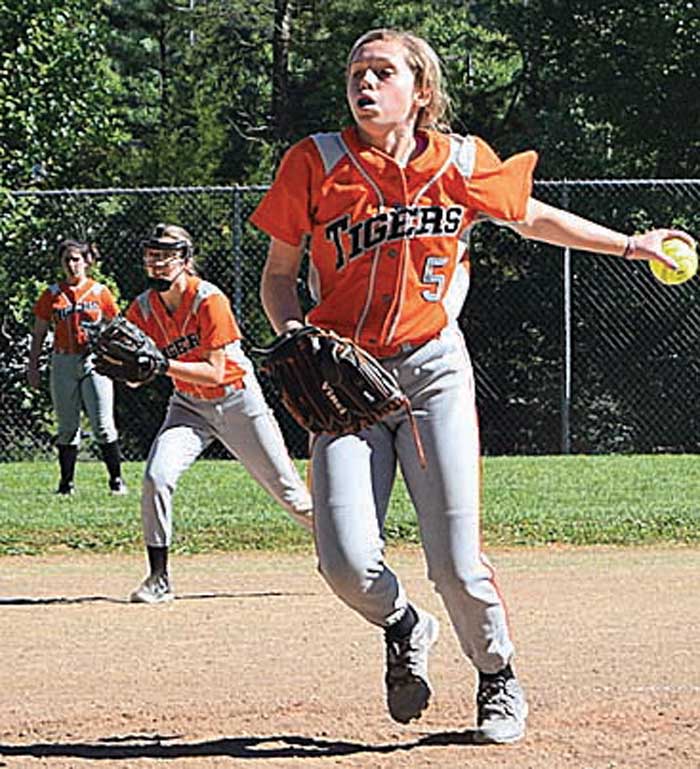 After ripping off three wins last week to remain undefeated and largely unchallenged, South Davie’s softball team is 9-0 with the most wins in at least 18 years.

“I’m really proud of them,” said Tim Kenney, who was elevated from assistant to head coach late in preseason because of a sickness to head coach Gloria Chalmers. “With what happened with coach Chalmers, it would have been real easy to go in the tank on something like that. You’ve got to give credit to the girls because they’ve held it together and they’ve come together as a team. Credit coach (Mike) Wyatt and coach (Kaitlyn) Hall for all they’ve been doing and getting the girls ready to play the games. With their knowledge of softball, it’s a fantastic thing to see.”

It was another breakthrough for the Tigers, who were outscored 99-13 during a 10-game losing streak to North. It was their first win over North in six years (2009).

Abbey Whitaker had a leadoff triple and scored in the first inning. Carley Green and Easton Johnson had back-to-back doubles in a two-run second. South exploded for seven in the third, ending the game after three via the mercy rule and cracking double figures in runs for the sixth time in seven games. Three walks were mixed in with singles from Sierra Foster and Whitaker, a triple by McKenzie Tomberlin and a double by Rachel Bostic.

Bostic pitched all three innings, recording South’s third shutout win and handing North its first shutout loss of the season. She walked one and struck out five.

Bostic continued to dominate in the circle in a 9-2, five-inning South win in game two. She went all seven innings and South collected 12 hits.

“We played our best ball of the season,” Kenney said. “We hit the ball well. We ran the bases well. I mean it was a total game for us.”

Whitaker, Tomberlin, Sydney Wyatt, Bostic and Green had hits in a two-run first. Abbey Custer’s first-inning double cut North Davie’s deficit to 2-1, but South answered with four in its half of the second. Erin Cartner’s single, Wyatt’s double and Bostic’s triple keyed the surge.

Cartner and Foster had singles in a two-run fourth, and Wyatt and Johnson (double) had hits in the fifth.

The Wildcats, who dropped to 3-4 with a fourth straight loss, got hits from Ball, Kayli Murphy, Custer and Desiree Lewis (triple).

South struggled a bit – by its standards – but had little trouble emerging with a 9-3 home win over Summit.

The Tigers’ 3-0 lead was erased in the third, when Summit used four bloop singles to force a tie. No problem. South regained a 5-3 advantage in last of the third and won going away.

“It was ugly, but we got the W,” Kenney said. “We had such emotional wins over North Davie the day before, and it was a trap game. We did not adjust to their pitching very well. But fortunately, we had great pitching and good defense.”

Tomberlin delivered an eye-catching performance while pitching a complete game (seven innings). She struck out a whopping 18 in a four-hitter.

“They had three hits that were dying quails to right field,” Kenney said. “They were perfectly placed and there was no way we could defend it.”

The Jaguars were averaging 4.6 runs before scoring the most in 14 games (18-0 at Lexington last year).

“It was an absolutely crazy game,” coach Shannon Wood said. “We could have easily given up after being down 9-0 and 11-3. We continued to fight.”

How wacky – and painful – was it? Believe it or not, Ellis outhit N. Wilkes 14-3. Five walks helped N. Wilkes take a 3-0 lead in the first. Eight walks and an error aided Wilkes’ six-run second.

Ellis put up a major fight, only to fall to 1-5 with a third straight loss. Lindsey Dingler took over in the circle in the third and “pitched great” for four innings, Wood said.

“She completely redeemed herself,” Wood said. “She hit awesome.”

And what about Shea Woody, who had fans shaking their heads in disbelief. Her two hits were a triple and home run. It was the first homer Wood has witnessed in middle-school ball in seven years at Ellis.

“It was definitely one of the hardest hits I have seen in years,” she said. “It was a line shot that was still going up when it hit the hill behind the left-center fence. She is one of the best all-around players I have coached in a while. She is a natural leader and has higher expectations for herself than I have, and that is saying a lot. The (Ellis) baseball coaches were picking after the game, saying that Shea is going to play baseball next year.”