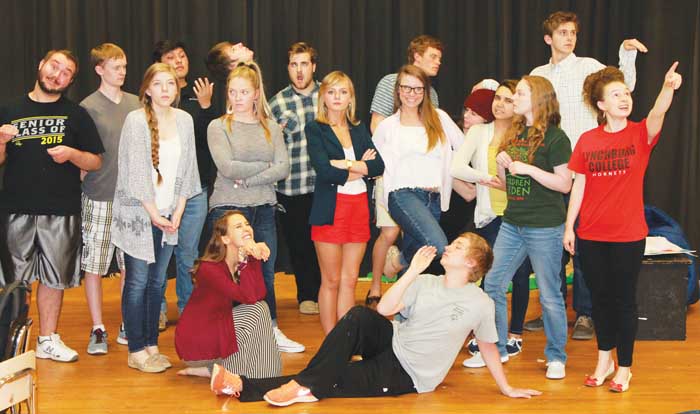 Follow a rabbit to a delightful, entertaining world of childhood fantasies at the Davie High Player’s production of Alice’s Adventures in Wonderland May 7-9 at the Brock Performing Arts Center on North Main Street in Mocksville.

The play centers around Alice as she journeys into a world of talking animals, comic royalty and races where the contestants run in circles. The Mad Hatter’s famous frantic tea party, a watch-carrying white rabbit, talking flowers, a sneezing duchess and a baby who turns into a pig all lead up to a finale with an interesting twist.

The cast of characters is: Hannah Shuskey as Alice; Colton Prim as the White Rabbit; Gracie West as the Mouse; Hunter Bailey as the Mock Turtle and the Cook; Brianna Locklear as Dodo and Duchess; Emily Whetsel as Lory; Perri Smith as the Red Queen; Zully Pukanecz as Soldier One and the King of Hearts; Bryan Espinoza as the Knave of Hearts, Humpty Dumpty, and Fish Footman; Gavin O’Brien as Soldier Two and Rose; Toni DePaoli as the Queen of Hearts; Collin Williams as Caterpillar and Tweedledee; Shane Schneider as Frog Footman, Tweedledum and the Doormouse; Elisabeth Beauchamp as the Cheshire Cat and Daisy; Jacob Hester as the Mad Hatter; Nick Sinopoli as the March Hare and Knight; Maddi Meade as Lily and Sister; Morgan Fuller as the White Queen; Wyatt Roby is assistant stage manager and Taylor Morgan is stage manager.