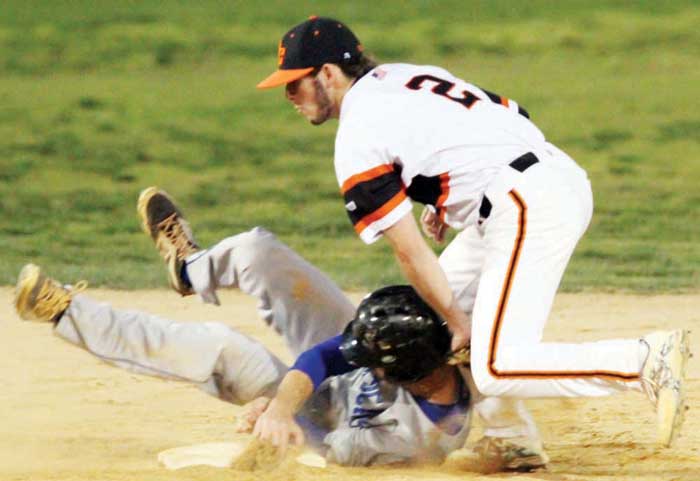 Unfortunately for Davie’s varsity baseball team, it’s fitting that it split two games with Mt. Tabor in the final week of the regular season. Every time the War Eagles seem to be in retreat mode, they respond with a big win. Every time they seem to be turning a corner, they stumble.

Davie has been up and down all season. When the dust settled last week, yep, it was 10-10 overall. After finishing sixth in the Central Piedmont Conference – they had a shot at the fourth going into the final week and the top four will receive state-playoff berths – now the War Eagles must win this week’s CPC Tournament to advance to the playoffs.

“We’re still living,” coach Bobby Byerly said. “We knew from the get-go that we wanted to win the conference tournament, so we’ve still got that goal that we can achieve. The season’s not over. We told them the playoffs start this week.”

Never mind the 13-7 margin of defeat against visiting Lake Norman in a nonconference game at the beginning of last week. The War Eagles had a hand and three fingers around this one with two outs in the top of the seventh. It slipped away and the wheels came off the wagon in the top of the eighth.

Davie led 7-4 with the bases loaded and two outs in the seventh. An opposite-field, three-run double tied the game, and Lake Norman exploded for six in the eighth. Left fielder Chris Reynolds came agonizingly close to making a circus catch that would have prevented the bases-clearing double in the seventh.

It was Davie’s second loss in extra innings, the other being 7-6 in nine innings at West Forsyth. Interestingly enough, Davie has a four-game losing streak in extras. Last year it lost 9-3 in eight to North Davidson and 9-8 in eight to Carson.

When Davie and Mt. Tabor squared off in game one of a two-game series, it was a game – and a series – that both teams desperately wanted in their attempt to climb to fourth place.

Davie got first blood, winning 8-2 at home on Senior Night for Colby Cranfill and Ryan Heath. It left both teams 5-6 in the CPC, and it gave Davie a measure of revenge for two losses to Tabor in 2014 (by 5-2 and 4-3 scores).

“(In the seventh inning against Lake Norman,) you’re all but putting the bats in the bag thinking you’ve got a win and then to have it pulled out from under you, you’re going to respond the next day or you’re going to come out as flat as a pancake,” Byerly said. “We responded and I was proud of them.”

After struggling for one of the few times this year in his previous outing, Cranfill delivered a vintage performance, going all seven innings, scattering six hits and striking out seven.

“Colby threw a whale of a game,” Byerly said. “He threw a lot of ground balls.”

Cranfill wavered in the fourth when he issued two walks, but he quickly rediscovered his rhythm. And his defense was perfect all night.

“After that he settled down and got right back in the zone,” Byerly said. “You couldn’t ask for any better. It looked like the real Colby, the Colby that we’ve seen (most of the year).”

Brandon Lankford and N. Harrell had hits in a two-run first. Davie broke Tabor’s back with a five-hit, four-run second that chased Tabor ace Graham Morton. Reynolds, Davenport, N. Harrell and Ryan Harrell mixed singles with a double from Craig Colbourne, a hit by pitch by Lankford and a walk by Byerly.

After McGee walked in the fifth, Lankford launched his fourth home run of the season. He rode a two-strike curveball to dead center field.

“This is our playoff week,” Byerly said. “Right now us, Tabor and Reagan are tied for fourth.”

The rematch at Tabor produced a stark contrast. Morton, who was roughed up at Mando Field, was back to form, willing his Spartan teammates to a 2-1 win over Davie.

In a remarkable turnaround, the senior righthander cuffed Davie with a one-hitter over five innings. He allowed one run and improved his record to 3-4. Jason Jenkins tossed two scoreless innings to get the save.

While Tabor improved to 12-10, Davie was limited to one or no runs for the sixth time.

“He was a lot different Graham Morton this time than he was the first game,” Byerly said. “His breaking ball was nasty. This game he could locate his breaking ball and he threw it two out of three pitches. We just couldn’t even make contact with it. That was the difference in the game.”

Davie started well enough, taking a 1-0 lead in the top of the first. Reynolds hit a dribbler and a charging Morton threw it away. Then came one of Davie’s two hits, a bloop single to left by Davenport. Reynolds scored when Colbourne bounced out to third.

Tabor tied it in the second. After a single and walk, a sac bunt advanced the runners. The run scored on a ground out to short. Tabor scored what proved to be the winning run in the fifth. With runners at the corners and one out, the No. 3 batter doubled.

Meanwhile, it was an offensive nightmare for Davie. With two outs in the second, N. Harrell raced to third when the right fielder misplayed the ball and let it get past him on a dive attempt. The next batter, though, flew out.

Davie’s big chance came in the sixth with Tabor nursing the 2-1 lead. Davenport reached on a throwing error and Lankford walked. Jenkins escaped when a bunt was popped up to the catcher and the next two batters struck out and grounded out. In the seventh, McGee singled up the middle with two outs, Davie’s first hit since the first. A ground out ended it.

Davie starter Isaac Campbell fought control problems for five innings (seven walks, although one was intentional), but he certainly pitched well enough to win. He gave up just three hits and two runs because he was able to escape a pair of bases-loaded jams. Reliever Jalen Scott worked a 1-2-3 sixth.

There were five hits all game. Davie endured a fourth loss when holding an opponent to one or two runs. Campbell has been a victim of most of that bad luck.

“It was deja vu all over again,” Byerly said. “One extra hit or one better play than us was the difference in that game. We just couldn’t come up with a timely hit to even put a threat on. We’ve got to learn how to hit a breaking ball.”

North Davidson and West Forsyth tied for first at 9-3. Reynolds was third at 7-5, Reagan and Tabor tied for fourth at 6-6, and Davie and Parkland (0-12) were sixth and seventh.

Note: A story on the Davie junior varsity’s season-ending wins over Lake Norman and Tabor will appear in next week’s paper.