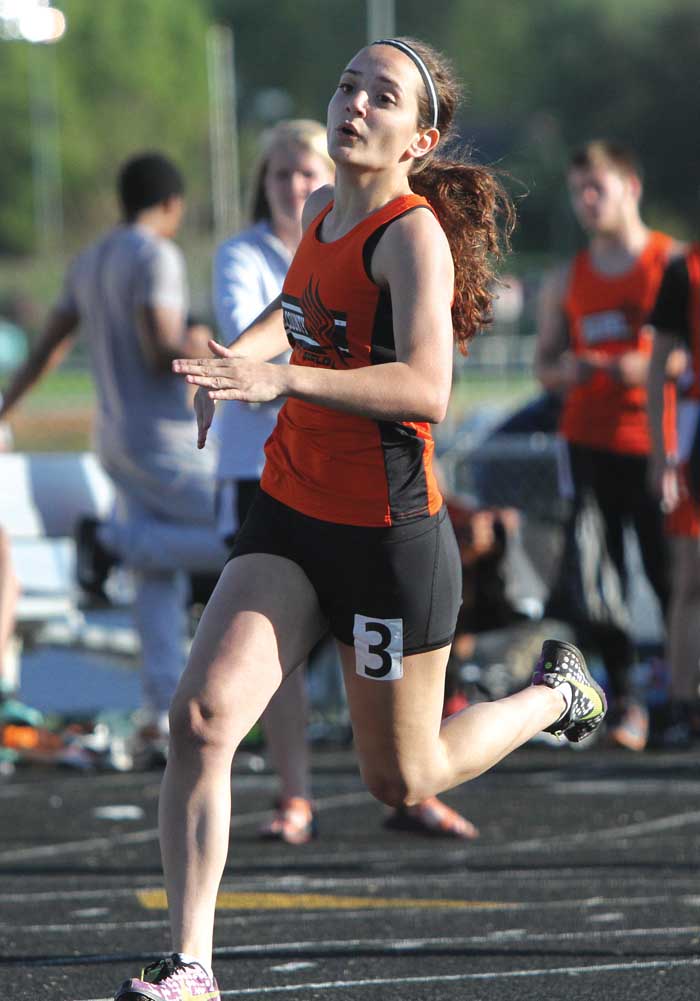 Sophomore Zella Ebert runs the 800 and 4x800 relay for Davie.

Williford of the Davie boys swept first in the hurdles events, while Dove of the Davie girls captured the discus for the second time in her high-school career.

The top-two finishers in the individuals events earned all-CPC status.

Williford, who began running hurdles as a North Davie seventh grader under coach Don Tabat, claimed the 110 hurdles and 300 hurdles to become a rare double winner for Davie in the league’s main event.

He traces his ascension in those events to his days as an understudy to Caleb Mathis, who was the CPC champ in the 110 hurdles in 2013, when Mathis turned in a time of 15.16. Mathis went on to finish sixth in the state.

“I learned a lot from Caleb when I was a freshman,” Williford said. “He really helped me out that first year, and I’ve just excelled from there. I’ve been pretty competitive, but this is the first year that I’ve been winning.”

The only times Williford has not finished first in both events were the season-opening meet against Ashe County and the large meet at Ashley High in Wilmington. He finished in the top five in both hurdles at Ashley.

“My times have been getting better and better this whole year, and I did feel confident that I would be the top competitor (in the CPC),” he said.

In the 110 hurdles, Williford completed it in a personal-record 15.32 seconds to nip a 15.43 runner from Reynolds.

“A really good runner from Reynolds definitely came to compete that day, the same as I,” he said. “But I managed to beat him by just a little.”

For good measure, Williford turned in another personal record in the 300 hurdles, his 40.95 time beating the runner-up from Tabor by more than two seconds (43.11).

“I was extremely excited about that (40.95),” he said. “That was a big accomplishment for me. That really surprised me because earlier in the season I was running 43s, and that’s what all the second- and third-place finishers ran. But I just had a really good start. I stayed smooth the entire way and I finished the strongest that I’ve ever done. So I was amazed at how well my performance was.”

Dove is no stranger to CPC titles.

It was just a typical outing for Dove, who has not lost in the discus all season. Last year she finished fourth in the regional at 107 and 12th in the state at 88-2.

“It was a good way to start finishing out the season,” Dove said.

Dove added to her scrapbook in the shot put, finishing second to earn all-CPC honors in two events. She threw the shot 30 feet, 10 inches to beat a 33-1 from West Forsyth. She was also second in the shot in 2014, when she went 30 feet.

“I was confident I would place pretty well, but there were a couple new girls that I hadn’t seen before, so I wasn’t really sure how I would do against them,” she said. “It was one of my better throws this season. It wasn’t one of my best through all of high school, but it was definitely one of my better ones this season. So I felt alright about it.”

The Midwest Regional is May 2 at Dudley. Williford is seeking his first state appearance. Dove will be bidding for her second.

“I haven’t looked at the competitors’ times,” Williford said. “I know there is going to be a lot of good competition there. All I can do is run the best and fastest times that I can manage, so that’s what I’m going to do. I want to PR everyday.”

“I’m hoping to be at least top four so I can go to states,” Dove said. “I’m not really too worried. I’ve been working and I think I’ll do fine.”

Sophomore Savannah Everett of Davie’s girls joined the all-conference list by placing second in the high jump. The winner from West Forsyth jumped 5-2 to Everett’s 5-0.

Senior George Mitchell of Davie’s boys reached all-conference by taking second in the triple jump. He went 42-5 to a North Davidson guy’s 42-10.5.