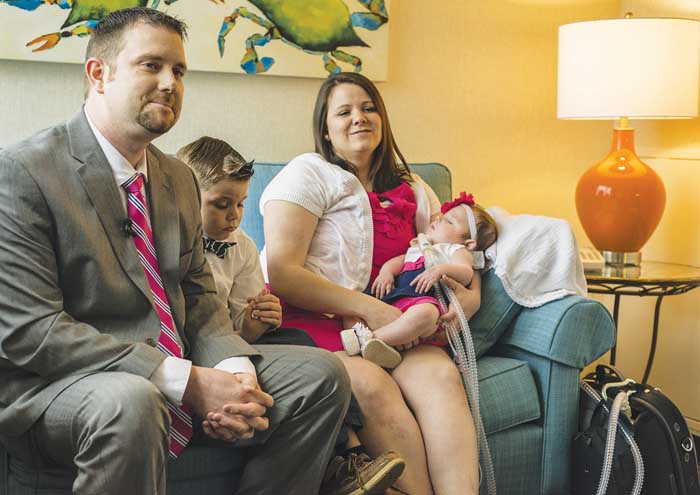 Matthew, Hudson and Megan Pope talk about their journey with daughter Madi. - Photo by Sam Cassidy

It is a small world, after all.

And that was pretty evident at Wake Forest Baptist Medical Center last week.

Megan and Matthew Pope got to meet the man who manufactured a device that would help one of their children live, and that man, Todd Cassidy, got to meet the baby many call a miracle.

When the Popes and their son Hudson, of Advance, found out Hudson was going to be a big brother, they naturally started making plans. What would they call the baby? What would the nursery look like? Would it be a boy or girl? As the pregnancy progressed, they became more excited to meet the newest Pope.

But about 10 weeks before Madi was born, the couple found out something was wrong.

Matthew said initially they believed she had a condition called esophageal atresia, meaning her esophagus (the tube that carries food and liquids to the stomach) wasn’t developed and connected to her stomach. Plans were made for a C-section delivery that would include a team of doctors and nurses to care for Madi’s condition.

But shortly after Madi was born last June 26, it was discovered she had a rare congenital defect of the larynx (voice box), trachea (windpipe) and esophagus. The condition is called a laryngotracheoesophageal cleft, meaning there is a gap between the upper airway passage and the food passage that could allow food or liquid to get into the airway and cause damage to the lungs.

It is a potentially fatal condition and required immediate surgery.

To help her breathe during surgery, a double plastic tube was needed to keep her airways open. But that tube didn’t exist.

So her surgeon, Adele Evans, a pediatric otolaryngologist, who admits she was thinking about Madi “all the time,” sat at her kitchen table and devised her own. Using three tubes, she placed two smaller tubes into the larger one, sealed it with glue, and used that as a guide to make another one the next day that she kept sterile until it could be used in Madi during her first surgery.

During the surgery, the tube worked, but another, more involved surgery was scheduled for September. For that surgery, because Madi had grown and her condition had become more complex, another tube, a professionally manufactured one, was needed.

Located in Winston-Salem, Cathtek has been in business for 16 years and manufactures catheters and other medical devices. As soon as its president, Todd Cassidy, found out what was needed, he went to work.

“We make thousands of devices a year that are used all over the country, but it’s a rarity that I get to have such an immediate, personal impact, and so close to home,” he said.

At the time, he had no idea the baby he was making the device for lived in the same county where he was born and raised, just miles away from his Farmington home.

He just knew he needed to act fast. And he did.

The new device was in Evans’ hands in less than two days, and in Madi shortly after. Just over two weeks after that, Madi’s surgery was a success, and she was able to breath on her own afterward. After nearly six months in the hospital, Madi was able to go home, in time for Christmas.

Cassidy said it is not common for a medical device to be manufactured and utilized in such rapid succession.

“A device like this could take two years and several million dollars to go to market, with testing, validations, and approval from the Food and Drug Administration. But we were allowed to do this as a custom device for a procedure. As a doctor might write a prescription for a medication, there was a prescription generated for this device. Fortunately, while this had to be done rapidly and for a very specific need, it was not a very complex device to make,” he said.

Hudson, 6, got to miss school at Shady Grove, to meet the folks who helped his little sister. With a smile that made his dimples look even bigger than they are, Hudson sat quietly, holding Madi’s hand and talking to her.

While they aren’t sure what the long-term prognosis will be for Madi, in the short term, they hope she will be off the ventilator that is helping maintain the pressure her bronchus needs to stay open. After that, hopefully her tracheotomy tube, which Cassidy modified for her use, can be removed, and when she is a little older, she will need additional surgery.

“Hopefully, she will lead as normal a life as she wants it to be,” Matt said. “The day we found out what the doctors said Madi would have, we went home and Googled it. Everything we found out was bad, that it was incompatible with life. We cried out to God to help us, and He did.”

She was diagnosed with leukemia when she was 6 years old, and she underwent chemotherapy there. After two years of treatment, she went into remission and has been in remission ever since. She also worked at the medical center as a data analyst before Madi’s birth, but with all the care that is needed for Madi on a daily basis, the couple decided for now, Megan was needed more at home.

Because Madi was sedated for so long, she is still being weaned off medication. Developmentally, she is at about the level of a 4-month-old, able to roll over and sit up with assistance. Megan said by the time she is about 2 years old, she should be caught up. A physical therapist and a nurse visit the home, but Megan and Matt are the main caregivers for Madi. While it can be exhausting, they have friends and a church family from New Life Baptist who have helped with meals and prayers.

And then, there is that man who humbly says, “All I did was make a tube.”

He stood near Madi as her family and Dr. Evans were interviewed by several news stations, smiling at Madi’s snoring as she slept in her mother’s arms. When asked later if it was true he made the device for free and why, Cassidy simply said, “Yes, because I wanted to help the patient, and charging for it just didn’t seem like a priority. My biggest concern was for a good outcome.”