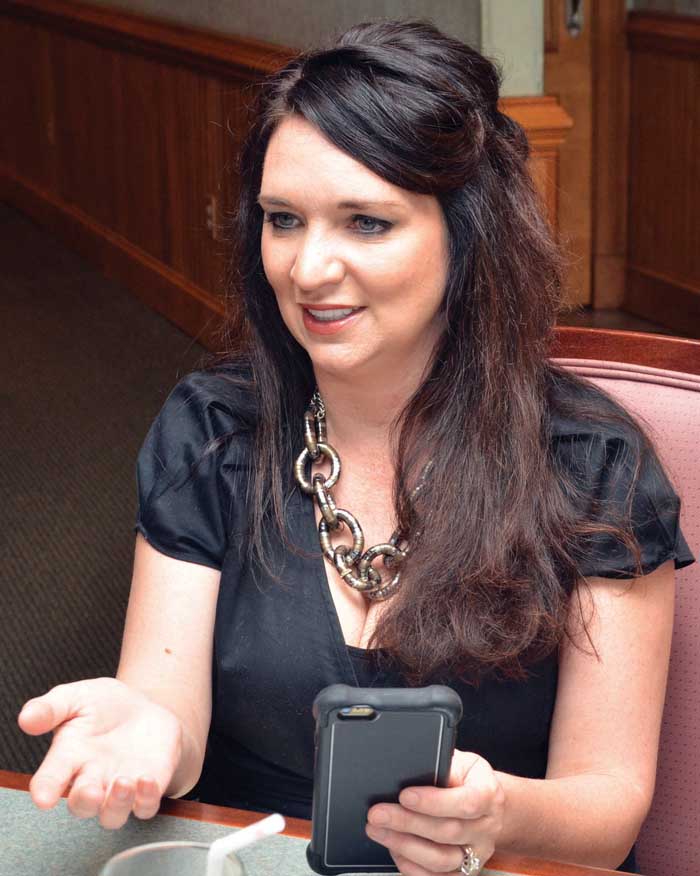 Abbie Sancrant talks about her blog. Photo by Robin Snow

ADVANCE – A woman here recently got the opportunity of a lifetime, as she was invited to a town hall meeting with President Barack Obama.

Abbie Sancrant is a blogger, and is part of the BlogHer network. Sancrant started her blog, “All That Makes You,” in 2012 and her stories range from the hilarious (taking her twins for their first haircut and finding out the barber has prosthetic fingers) to the heart-wrenching (losing her mom when she was 19) to the thought-provoking (the gay marriage amendment).

When she started her blog, (she tells this story punctuated by a great deal of laughter) she tried to keep it a secret from her breast-doctor husband Jim, but he found out. She expected his disapproval but ended up getting a thumbs-up from him.

“Blogging is scary,” she said, “like dumping out your underwear drawer onto the table at a dinner party.”

Her stories have been on CNN and in Redbook, and she says it was her “social media footprint” that got her invited to the meeting hosted by SheKnows Media and BlogHer in Charlotte April 15. She was among 100 NC-area SheKnows Media experts, bloggers and influencers who were invited to the tax-day event to hear Obama’s budget proposal and talk about the wage gap between genders.

In true “Abbie Gale” fashion, when she found out she wasn’t on the initial guest list, she “threw a stink,” then was thrilled when the invitation was extended to talk about something she knows about firsthand. Fifteen years ago, Sancrant was product development coordinator for Rocky Boots and found out a man who worked in the mailroom, “stuffing envelopes” made more money than she did.

“When I found out the topic of this town hall meeting, I really wanted to be there. I get the struggle where you do the same job as a man but make less,” she said.

At the current rate of change, that gap will not close for another 124 years. This creates a $490 billion per year deficit in the rate of pay or 22 percent less tax dollars spent.

While the beginning of the meeting was geared toward Obama’s budget plans and the wage gap, after a teacher said she believed the key to economic growth and ending poverty is education, the topic quickly turned toward low teacher pay. Sancrant said she was surprised when Obama shared his knowledge of where the state falls in terms of salaries for teachers, and since topics of minimum wage and affordable childcare options are of interest to her, so much so that the questions she submitted prior to the meeting were about that, she was happy when the talk turned toward those areas.

“When you come to North Carolina, and you want to talk about women’s issues and economics, it’s hard not to talk about education and teacher pay. These are not partisan issues. Families have to be able to make a livable wage, and the minimum wage needs to be raised in order to help young families afford better childcare options. There are so many families with the mom staying home because it would cost more to put a child in day care than she would make,” she said.

The meeting created a buzz in the Sancrant household, with Abbie blogging about the experience and her three boys clamoring for pictures she took of the Secret Service. She will use the experience as fodder for future stories, because she knows how crucial a hashtag and a post can be.

“People need to understand we can make change from here,” she said, pointing to the table in front of her. “We don’t have to be Raleigh. We can be in the car rider line, because all we need is this (holding up her phone) to tweet or email or post our representatives. A letter, they will never see, but a tweet or post, if they don’t see it, their PR people will, and they will get the message.

“On my blog, I can tell funny stories or make people laugh, but when I can write something that makes people think or causes action, that’s something really amazing.”