Board delays decision on shooting range 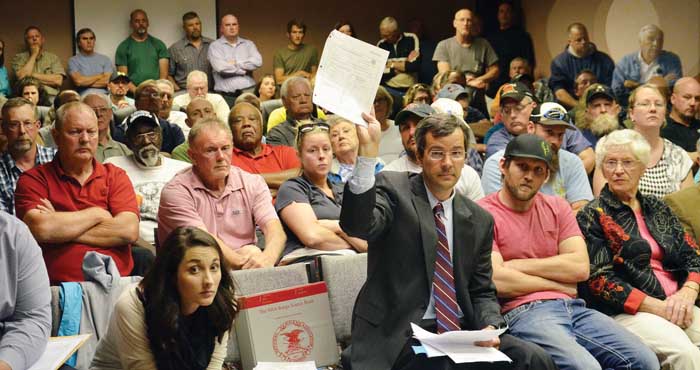 Sarah Vogler, attorney Kirk Sanders and Zach Vogler tell the board it's up to Robert Wisecarver to prove his case.

One hundred nineteen people did not get the resolution they hoped for Monday night, after the Davie County zoning board of adjustment tabled a request for a special use permit for a proposed shooting range.

Many of the residents who live within about a quarter of a mile from where Robert Wisecarver planned to build the range on 68 acres off U.S. 64 East, Mocksville, were at the meeting, where chairs quickly filled up and people leaned up against the walls for hours.

Wisecarver, former county commission chair, outlined his plan to build The Range of Davie County, which would include outdoor ranges for shotgun and rifle shooting and indoor ranges for archery, air rifles, and pistols. He said after speaking with Zach and Sarah Vogler, whose home is about 800 feet from the proposed range, he decided to move the pistol range indoors.

“They was concerned about it being so close to their house,” Wisecarver said.

Also in the plan would be three buildings, one for the business, one for the indoor pistol range, and one for archery. Wisecarver said there would be space for parties, weddings and banquets, as well as for personal defense and gun safety classes.

A cafe, he said, would help realize his goal of having a “family spend the whole day and never have to leave.”

Firearms would be available to rent and for sale, and clothing and other items would also be sold.

Proposed hours the range would be open would be 9 a.m. to 8 p.m. Monday-Saturday, and he said if all the ranges outdoors were full, there could be 14 or 15 people shooting at one time. Weekend tournaments would be held, some of them televised, adding this would be the only facility of its kind in the country.

“I feel this would benefit Davie County. This here would have everything at one place,” he said.

A Duke Energy transmission line runs through the property, which is bordered by a creek, and part of it is in a floodplain. It is currently zoned for residential-agricultural use. Wisecarver does not own the property but has an option to purchase it.

He told the board shots would be fired away from US 64 and that machines and berms would absorb the projectiles.

Board member Norman Carter asked Wisecarver, “Are you telling us there is no way a projectile could leave this property?” and Wisecarver answered, “I can’t say that.”

Although pictures Wisecarver produced did not include any of the homes around the property, Kirk Sanders, an attorney hired by property owners to fight the proposal, said he believed about 200 families live within a quarter mile. He said some of the adjacent properties include an egg-laying hen farm, and at least two of the properties have several head of cattle on them. He told the board he had a petition signed by 119 people near the site.

“You didn’t do a study on the potential impact to the neighbors, did you?” Sanders asked Wisecarver.

Wisecarver replied, “No sir. Did you?”

After determining Wisecarver had had no environmental or sound impact studies conducted, Andrew Meadwell, development services director, told the board they could table the request until Wisecarver had time to gather expert witness information.

Sanders argued the residents at the meeting had set aside time and made preparations to be at the meeting, that Wisecarver bears the burden of proof and the meeting was “his day in court.” That comment brought robust applause from the audience.

But board chair Michael Branham said he did not believe the board was prepared to make a decision, so the request was tabled to June 15 at 6:30 at the courthouse, to accommodate the large crowd that is expected.