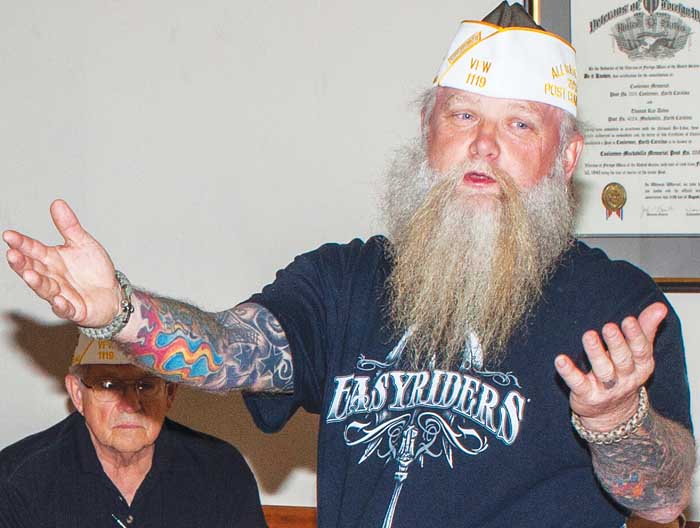 Mayor Lynn Rumley opened up the VFW Post 1119 meeting with a proclamation: “By the power vested in me and on behalf of the town of Cooleemee, I hereby declare, this day, April 11, 2015 as Commander Curtis Wayne Seamon Day in Cooleemee, North Carolina.”

With top secrecy among the members of the post, Seamon’s family and friends were present, including District 11 Commander Don Isaacs and Sr. Vice Commander of District 11 Post 10346, Pete Knight.

Post members had agreed to have the elections a month early. The unanimous vote allowed current officers to remain the same for 2015-2016.

Seamon said his membership of the VFW Post in Cooleemee since 1996 and active member since 1998 and commander since 2001 has been enjoyable. His only concern about being commander is all the jobs that can come at one time. He was sincere about his appreciation of the meeting and he thanked all the visitors for being there.

He commended the members for their support for without them they wouldn’t have a post. When Mocksville joined the Cooleemee post they came in and it was like they had been friends for years, he said.

He enjoys working with the kids at the school, including the teachers. He spoke highly of Lorraine Blackwood, who was the auxiliary at times when there were few members. He gives them credit for keeping the post going.

Isaacs stated in order to keep a good man and to not work him to death, everybody needs to do a little bit.

“That’s the key of the success of a good organization, to spread it out. It will be more meaningful to you as well to become more of an integral part of this post if you get involved and do some things.”

When Tom Kopetzky presented Seamon with the gavel plaque, he said: “Our post doesn’t want you to leave. We want you to stay man. You’re our brother.”

A gavel plaque is given to a commander only when he has decided to leave a post.  Kopetzky laid the gavel was on the table because “you’re not finished.”

The mood took a turn after Kopetzky spoke with a  lump in his throat that was felt by most in the room.  Several stood up and shared what Seamon had done for the post and how much he was appreciated.

Harold Frank, previous commander of Mocksville, said they were there because of Seamon. “He came to our meeting twice and told us what he could do for us.”   There was a unanimous vote to move the post to Cooleemee.

He admitted he gets a little choked up when he talks about “good things people do for us.” He said that after World War II, Davie County built a post in Mocksville.  It had 400 members in the 40s and 50s.

We had over-spent and comrades in Clemmons heard about it, and delivered a check to pay the balance.

Darryl Veach feels proud to be with other veterans and it helps him. It’s like a support group. He pointed out J.B. Caldwell from Mocksville as his hero. He will be 90 in August and is a driver for meals on wheels and has been doing so for about 15 years. Veach thanked the veterans for making him feel welcome.

About three or four years ago, post chaplain, Jonathon Morris, joined the group. He was commander at another post from another state for three years. Morris said he thought he was a good commander until he came to Cooleemee and watched Seamon.

“He’s a commander’s commander.” He doesn’t do things to just get by; he does things above and beyond and goes the extra mile. You can tell that by his white hat.”

Knight explained what a commander had to do to earn a white hat.

VFW National requires a commander and his post to meet qualifications of 5 core programs: 100% in membership, youth programs such as  teacher of the year, Patriots Pen competition, voice of democracy, Buddy Poppy program, involved in community service through the schools, churches and community activities and involvement in civic organizations.

North Carolina awards 24 white hats to commanders, and Seamon is one of them.

We are proud of you Wayne Seamon and are honored that you have put so much of your heart into our post.  The standards you have set are high and we are honored and grateful that you have decided to continue to be our commander.