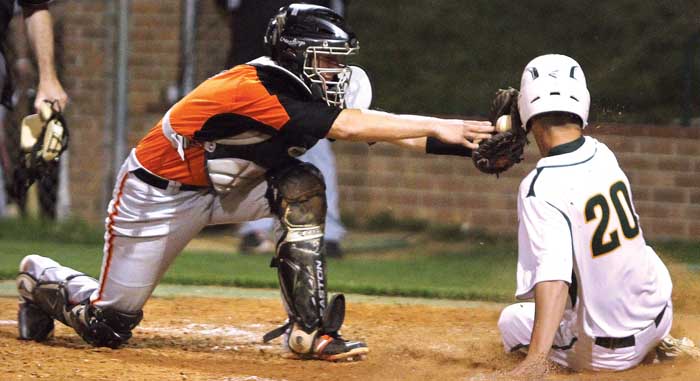 The Davie baseball team’s pitching staff continued to amaze against visiting West Forsyth last week – this was Isaac Campbell’s turn to shine on the hill – but the offense had a relapse as Davie fell short 2-1 against the defending state 4-A champion.

While the Titans improved to 7-7 overall and 5-0 in the Central Piedmont Conference, the War Eagles (2-5 CPC) saw their three-game winning streak come to an end.

“It was deja vu all over again,” coach Bobby Byerly said.

You have to feel bad for Campbell, a junior lefthander who is 0-3 despite a 2.15 ERA in 26 innings. In his three losses, Davie has produced a grand total of one run.

Campbell was superb – again. He went all seven innings. He allowed six hits, walked none and struck out 10. He did hit two batters. West scored in the first and sixth. Davie got its run in the fifth.

Davie’s offense had no answer for West senior righthander Jake Mayhew, who is headed to UNC-Greensboro. He went the distance, tossing a two-hitter, to push his record to 5-0.

“He threw a whale of a game,” Byerly said.

West scored in the top of the first. It would have been at least 2-0 Titans if it weren’t for a fantastic play by left fielder Chris Reynolds.

A single followed a triple. The Titan tried to stretch it to a double. Reynolds played the carom off the wall like a pro, grabbing the ball with his bare hand and throwing to second in one motion. Second baseman Nathan Harrell tagged out the runner. The play loomed large when the next batter doubled.

“It was absolutely perfectly played off the wall,” Byerly said.

Mayhew had a perfect game going for four innings, but Davie fought back to tie in the fifth. Paul Davenport walked, then Forrest Barber got Davie’s first hit. Davie scored on a passed ball. It was threatening for more, with two on and one out, but back-to-back strikeouts kept the score 1-1.

West broke the tie in the sixth. A one-out single was followed by a two-out, RBI double.

“They put more balls in play than we did,” Byerly said. “That was the big difference. They strung hits together and we never strung anything together.”

Davie’s second and final hit came in the seventh from Davenport. It was the fifth game this year that Davie scored one or no runs.

“When you’ve got a good pitcher on the mound, you can’t get down 0-2 and 1-2,” he said. “If you struggle with the breaking ball or something offspeed, I’d rather sit dead red fastball and be ready to hit the first one that crosses the plate. That’s something we didn’t do.

“We thought last week we showed some progress and looked like we were getting over the hump, and we showed better-than-average hitting. But tonight we vapor locked. We’re thinking way too much and trying to do too much with one pitch. Until we get out of that and quit trying to yank a breaking ball and taking too many fastballs for strikes, we’re going to continue to hit below the Mendoza Line.”

The War Eagles had too much firepower for visiting Forbush in a nonconference game, winning 14-2 in five innings by racking up 12 hits.

Davie (7-5 overall) was averaging 2.8 runs per game before unloading on the 7-7 Falcons.

It proved to be a colossal tease.

Davie’s baseball team held a 6-1 lead over host West Forsyth Friday night. The War Eagles were six outs from a big win over the first-place team in the Central Piedmont Conference.

Then came a collapse for the ages. The Titans scored five runs in the sixth to force a tie, and they would stab a sword in Davie’s heart in the bottom of the ninth, 7-6.

Considering the War Eagles were allowing just two runs per game on the year, you can understand why the five-run lead felt even larger than that.

While West (8-8 overall) remained in first at 6-0, Davie fell to 7-6, 2-6. Earlier in the week West pulled out a 2-1 decision over Davie, which had dropped five straight in the series.

“I still haven’t gotten over it,” coach Bobby Byerly said two days later. “It was a rough one.”

Colby Cranfill was great as the starting pitcher, which was nothing new. He went 5.2 innings, gave up six hits, six runs (one earned), walked one and struck out seven. Davie unraveled with four errors, committing three in West’s five-run sixth and one in the decisive ninth. By contrast, West made one error. Each team had eight hits.

“Cranfill was great,” Byerly said. “He was good in the sixth, to be honest. But three errors in that inning killed us.”

When it was time to lift Cranfill, Byerly went with Jalen Scott. And Scott was up to the challenge, working 3.1 innings and allowing one hit and one run. He came through with a 1-2-3 seventh.

“Again, pitching was not an issue,” Byerly said. “They kept us in the game, held them at bay. We’ve just got to make plays behind them in that situation.”

It was all Davie for most of the night. In the first, it scored two runs without getting a single hit. Four walks and a passed ball did the trick.

The War Eagles made it 5-0 in the fourth. R. Harrell walked and advanced on a sac bunt. Chris Reynolds and Scott were hit by pitches to load the bases. Lankford followed with a two-run single. Then came an RBI single by Craig Colbourne.

In the sixth, Davie manufactured a run to push the margin to 6-1. Scott singled, Lankford doubled and Colbourne plated one with a sac fly.

Yeah, the War Eagles were leading comfortably. But they missed a few opportunities to make it worse on the Titans.

“We left 11 men on base,” Byerly said. “In a couple of innings, we could have really put another nail or two in the coffin. But we left people in scoring position. That bit us too.”

The Titans came out of nowhere in the bottom of the sixth. After Cranfill retired the first batter, the meltdown began with an error. The next batter walked. Then came an error. Then came a double. With two outs, the third error of the inning kept West’s rally going. West tied it on a two-run double.

“They did hit a couple balls in the gap, but it should have never gotten to that point,” Byerly said. “When you give a team six outs … If we get eight hits and score six runs, we feel real good. That one inning, we made more errors than we’ve made in two weeks altogether. You’ve got to play seven (innings).”

The suspense kept growing in extra innings. In the bottom of the eighth, the Titans had a runner at second with two outs. They got a hit to right field, but Beau Byerly cut the runner down at the plate to keep the battle going.

In the last of the ninth, Davie’s fourth error of the game helped West load the bases with no outs. The Titan batter lifted a fly to left fielder Chris Reynolds. He made an absolutely incredible throw to the plate, but the runner was safe.

“It was fairly deep and Reynolds somehow throws a rifle to the plate and it’s a bang-bang play,” Byerly said. “I mean it was real close. He was safe, but it was a lot closer than what you thought it would be.”

It was an excruciating loss for the War Eagles, who are 2-3 in one-run games.

“The bus ride was real quiet coming home,” he said. “I pretty much said: ‘We’ve already given a 2015 Christmas gift.’ I’m not knocking West because they took advantage of every mistake we made and they never quit from being down 6-1 in the sixth. But we gave them an early Christmas gift.

“But I told them there’s a lot of baseball left and they always say what doesn’t kill you makes you stronger – so we’re still alive on Monday.”