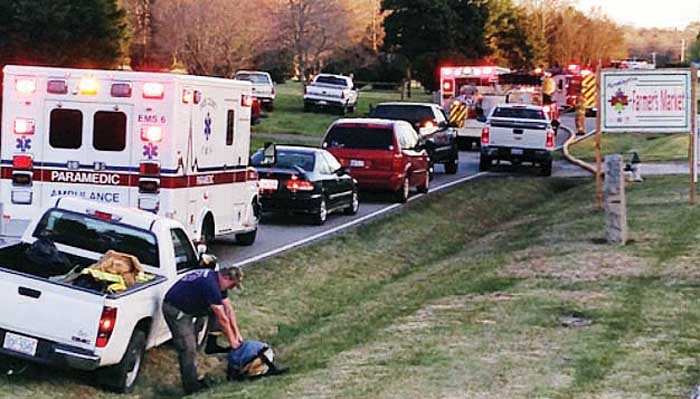 A woman suffered burns trying to save her dog from this house fire.

A fire that likely started in the kitchen of a Farmington Road home last Wednesday sent one of the residents to the hospital with burns.

According to Farmington Fire Chief Todd Naylor, Lou Tollison told paramedics before she was transported to the hospital that she was cooking when a pan of grease caught on fire. She tried to put the fire out with baking soda but the fire traveled outside the pan and flared up.

Greg Williams, whose wife Angie is a relative of the Tollisons, was passing Tollison’s home on his way to choir practice when something caught his eye.

He turned around at the fire department and went back to the house, but by the time he arrived, passing motorists had already seen the flames, kicked in the door and were inside the home. Williams went around to the back of the home, noticed the basement doors open and went inside, finding Lou there. She had been looking for her dog. He took her hand and led her around to the front lawn, he said.

Naylor, who responded to the 911 call that was placed around 7 p.m., said the dog was found and was suffering from smoke inhalation, but oxygen was administered and the dog was able to recover.

Naylor said the investigation is still in preliminary stages and he hasn’t spoken to Tollison, he said he was told she suffered second and third degree burns to her right arm and face. Her husband, Leroy, was at work when the fire broke out.

Extensive fire damage was done to the end of the home where the kitchen is located and to the carport off the kitchen. In other areas of the home, fire, smoke, and water damage occurred. Naylor said while the Tollisons may be able to recover some personal effects, he believes the house, which was wood frame with siding, is a total loss.

Traffic was re-routed for over two hours while fire units from Farmington, Smith Grove and Courtney responded, as well as the Davie EMS. Because the pick-up truck that was in the carport leaked fuel, which ran into a nearby stream, Mocksville’s HazMat team also responded, Naylor said. Duke Energy had to be called to turn power off to a nearby transformer.

Naylor said his thoughts were with Lou, who was in the burn unit at Wake Forest Baptist Medical Center, and despite her injuries, she was lucky to have escaped with her life.

“A lot of people will try to go back into the home after a pet, and unfortunately, that’s where we usually find them. She was lucky,” Naylor said.

When asked if putting baking soda on a grease fire is the best way to deal with it, Naylor said there is generally not a large enough amount of baking soda in a box to put out a fire.

“The best thing to do with a grease fire in a pan is cover it to smother it. If you can stay calm, slip on an oven mitt and put the lid or a large plate on the pan. It’s not a good idea to try to pick up the pan and move it, and you should never put water on a grease fire,” he said.

While many of their fire calls are a result of cooking accidents, Naylor said with the innovation of safety devices and fire safety classes, those and other fire calls are much less common than they were when he joined the fire department.

Austin York still isn’t sure why he took the back way home from work last Wednesday night. He said he “just had a feeling,” but nothing could have prepared him for what he would see and do.

York, 19, said as far away as half a mile from the area of the Farmington Community Center, he saw black smoke, and when he got closer, he could see it was coming from the home beside the center.

He also realized as he paused in the roadway that no one else was around.

York was on the phone to 911, and as he hung up, he ripped open the locked glass storm door, kicked in a locked wood door, and entered the home.

“It was so hot inside, and all that heat and all this black smoke just came rushing through the door when I got it open,” York said.

He and the other man, whose name he didn’t get, got down as low as they could and quickly moved through the house, calling out to anyone who might have been inside. York said he saw a movement and thought it might have been a dog and also said he thought he heard a dog barking.

“At that point, I knew there must be someone inside, because I’ve heard that dogs won’t leave a dangerous situation if their owner is there. By this time, some other people were there, and the guy and I were still in the house. I had my t-shirt over my face, but there was so much smoke that I couldn’t breathe and I was getting dizzy,” he recalled.

York ran outside, joining the other man, who had gone out ahead of him. He said he was out of breath and laid down on the grass, and the next thing he knew, emergency personnel were tending to him. York suffers from hypoglycemia (low blood sugar) and said his blood sugar was low when the paramedics checked it. He didn’t want to go to the hospital that night but did go to an urgent care facility the next day, where he had a breathing treatment and was giving a steroid inhaler. He was still coughing and wheezing five days later but said he was finally able to breathe through his nose.

York has no fire training, but has been racing dirt bikes all his life so is no stranger to making split second decisions. When asked if he considered at all the danger he was going into, he said, “It kinda went through my head if there were gas lines, the house could blow up, but then I thought it probably already would have. I just remember thinking if anyone was in there, they deserved a chance to get out. I wouldn’t have been able to live with myself if that woman had been hurt really bad or died and I could have done something to prevent it and didn’t.”