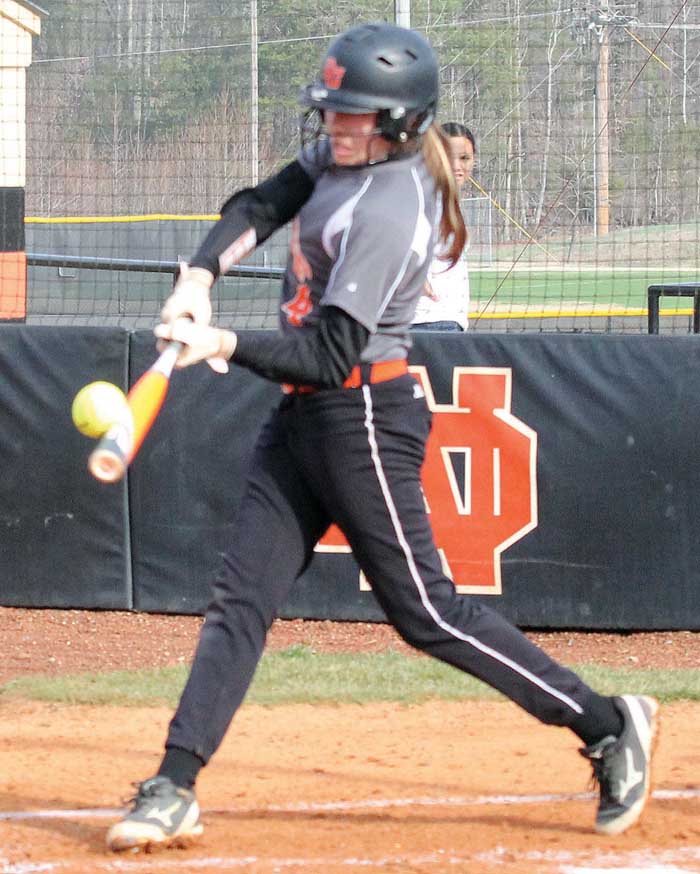 “This is a very strong hitting team,” coach Morgan Wyatt said. “This team has so much talent and has such a strong work ethic. Coach (Blaine) Nicholson and I are very lucky that we can move anyone around in the lineup one through nine because they all go up to the plate knowing the task at hand and get the job done.”

Webb’s home run left the yard in a hurry.

“As soon as it came off the bat, I knew it was out,” Wyatt said. “She is built like a Mac Truck and when she digs in and drives the ball, it’s scary. She has so much power. She had been in a little slump, if you want to call it that. She has been so anxious to hit it solid and unleash her power, and she did just that when she went yard.”

The coach marveled at Dishman, Walsh, Privat and Ferguson, among others.

“Dishman had another game of very successful plate appearances,” she said. “She can slap and play the short game, and she can also dig in and hit it.

“Walsh has stepped up. She has been very successful with runners in scoring position. She has gotten on a hot streak the past few games and is seeing the ball very well.

“This whole team can hit it. Privat hit a line shot at the center fielder. It was smoked but it was right at her. Ferguson is very consistent and strong at the plate, along with Burchette and Hendren.”

River Simpson pitched three innings to get the win. Carly Smith relieved with a scoreless inning, her first outing since returning from a broken finger.

“Smith threw the ball like she hasn’t missed a beat,” Wyatt said.

The War Eagles rallied, then held off host Forbush 5-4. It was a good win as Davie piled up 12 hits and only committed one error.

“Even though we run-ruled them (earlier), their pitcher is probably the best we have seen when it comes to speed and movement,” Wyatt said.

Tierney provided a big boost from the leadoff spot in her second game back from a thumb injury.

“It didn’t take her long at all to get back in the swing of things,” Wyatt said. “She got on base three out of four times and scored every time she got on. She is a demon on the bases with her speed, and she is also getting more aggressive and reading things on her own, which is huge.”

In the third, Tierney singled for Davie’s first hit of the game, advanced to third on an error and scored the game’s first run on Dishman’s ground out.

“Dishman stayed hot and got a crucial RBI,” Wyatt said.

Forbush put together four hits in the bottom of the third to take a 2-1 lead. Simpson responded by retiring 11 in a row. She went all seven innings, walking two and racking up nine strikeouts.

“Simpson has been a workhorse since Smith was out with a broken finger,” Wyatt said. “Simpson pitched an awesome game. All of her pitches were on point, she was relaxed and was just letting the defense work behind her.”

In the Davie fifth, the War Eagles used four hits to score two runs and take a 3-2 lead. Tierney bunted her way aboard. With two outs, Ferguson and Webb rapped RBI doubles.

“Ferguson is on fire right now,” she said. “She got three of the five RBIs. Webb also kept hitting ropes.”

Davie extended the lead to 5-2 during a four-hit seventh. Simpson, Tierney and Dishman had hits before Ferguson delivered a two-run hit.

Although Forbush struck for two in the bottom of the seventh, Davie held on.