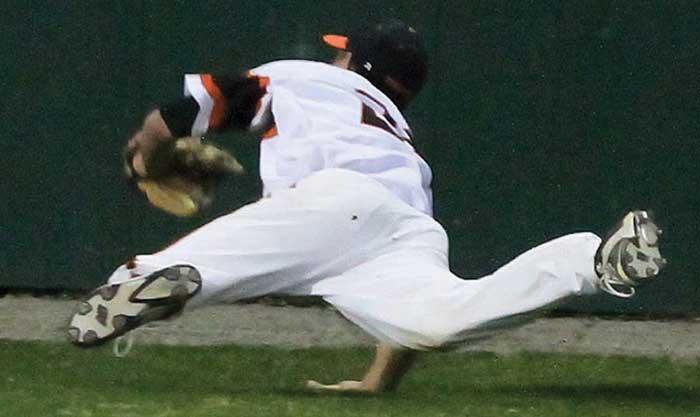 Junior outfield Forrest Barber leaves his feet in attempt to catch the ball.

The Davie varsity baseball team entered last week gasping for breath. It was 3-4 and its season high in hits was five.

Maybe the War Eagles have weathered the storm. Last week they turned their frown upside down, winning three games in three days.

The offense took a quantum leap forward, scoring as many runs in the winning streak (15) as it did in the first seven games. The pitching continued to give the coaching staff cold chills. Davie is allowing 2.1 runs per game.

“The sticks seem to be coming around a little bit,” Byerly said.

The pitching has exceeded even Byerly’s wildest expectations.

“Since 1990 I’ve been around baseball coaching in some capacity, and this has been the most impressive pitching performances that I’ve seen on a continual basis,” he said. “I mean our ERA is minimal. If you take away one (three-run) inning against Reagan, our ERA is just above one.”

In a nonconference game at Southeast Guilford, the War Eagles scored their first runs in three games, won 4-2 and broke a two-game slide.

It was averaging two runs and four hits per game before getting a season-high six hits. But the story was the pitching of Nathan Harrell, who improved to 2-0 by allowing two unearned runs in 5.2 innings, and Colby Cranfill, who got the save by striking out the final two batters with a runner at second. In between, Ryan Harrell retired the only batter he faced in the sixth. The trio combined on a five-hitter.

“Nathan threw great again,” Byerly said. “Except for one game, we haven’t given up over one earned run in a game.”

N. Harrell was only threatened once. It came in the first inning, when Southeast had runners at the corners with no outs. Two comebackers sandwiched around a strikeout enabled him to get out of it unscathed.

Davie scored the first two runs of the game in the fourth. Brandon Lankford and Davenport drew walks. After they advanced on a balk, N. Harrell came up clutch with a two-run single.

Davie extended the lead to 4-0 in the sixth. Davenport doubled, Colbourne supplied a run-scoring single and a run scored when Mikey Smith’s ball was errored. A two-run double in the sixth got Southeast back within striking distance, but it would drop to 5-4.

“We said our RPI went up tonight,” Byerly said. “That was a quality win. It was a playoff atmosphere.”

Once again Davie’s pitching was sensational in a 4-3 Central Piedmont Conference win at North Davidson.

Who thought Campbell and Cranfill would combine for 13 Ks against a lineup like this? North’s E.P. Reese and Austin Beck are headed to N.C. State and North Carolina, respectively. Campbell fanned Reese and Beck once each. Cranfill whiffed Reese once and Beck twice.

The losing pitcher was Cole Beeker, who got the win in North’s 5-0 decision in the first meeting. North slipped to 9-2 overall and 4-2 in the CPC, while Davie improved to 2-4 in the league. The War Eagles also stopped a three-game skid in the series.

“(North coach Mike) Meadows said it perfectly,” Byerly said. “If somebody’s not looking at this kid (Campbell), they need to be.”

“Both their guys (Campbell and Cranfill) had two or three pitches for strikes, and we just couldn’t hit them when we needed to,” Meadows told The Dispatch. “Tonight they were just better than us. That’s baseball.”

A two-out throwing error allowed North to take a 2-0 lead in the first, but Davie fought back in the second. N. Harrell and R. Harrell had a single and double, respectively, then scored on grounders by Caleb Wallace and Campbell.

Davie took a 3-2 lead in the third on Colbourne’s first high-school homer, a solo shot to right field.

“You saw the light turn on at the Southeast Guilford game,” Byerly said of the lefthanded-hitting Colbourne, a junior. “He had some good at-bats there, and tonight he ripped the ball. I mean he had an impressive outing.”

The homer capped an amazing at-bat.

“Colbourne fouled off five straight breaking balls,” Byerly said. “The sixth (curveball) he hit in the patch on the soccer field. He hit a bomb. It was a great at-bat. He sawed off good pitch after good pitch.”

North forged a tie at 3 in the third on a two-out bloop single over the first baseman’s head. Davie regained a 4-3 lead in the sixth. Davenport doubled, N. Harrell put down a sac bunt and R. Harrell delivered the go-ahead single.

North threatened in the sixth. A one-out walk and a two-out error put runners at the corners with leadoff man Reese at the plate. But Cranfill struck him out to preserve lead.

In a 7-1 nonconference win at Alexander Central, Scott put the cherry on the pitching sundae. He gave up three hits in six innings, walked two and struck out seven.

Not bad for his first varsity start on the hill and his first mound appearance since Salisbury in the second game of the season. Lankford tossed a perfect seventh as Davie’s team ERA dipped to an astounding 1.13.

“Jalen has always been the type who is going to throw strikes,” Byerly said. “With us playing three games in a week, we decided to go with him and he did a great job. When you hold a team to three hits, you’ve done pretty dang good.”

The War Eagles pounded out 11 hits – the third straight game with a season high in that category – played error-free defense and recorded the longest winning streak since a 5-0 start in 2013.

Davenport continued to sizzle, going 3 for 4 with a double. Lankford went 2 for 4 with a home run and two RBIs. Sophomore Beau Byerly got in the act with a single and double in three at-bats. N. Harrell doubled in his lone at-bat. R. Harrell also doubled.

The homer was Lankford’s first of the season and the second of the junior’s varsity career.

“His at-bats looked a lot better,” he said. “He’s had a couple seeing-eye (hits), but tonight he really hit a couple on the screws.”

“We played unbelievable defense again,” Byerly said. “Lankford made a ridiculous play. He went six to eight feet across the (foul) line and threw the guy out at first. Ryan made two amazing plays. He went in the five-six hole, dove and threw to second for a 6-4-3 double play to bail us out of an inning.”