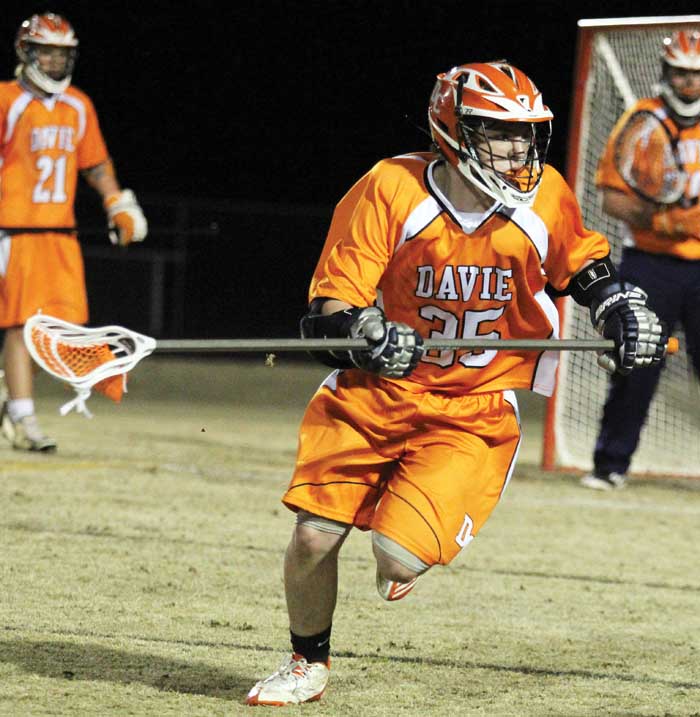 Hunter Akers is a defenseman.

Smarting from an 0-5 start and three straight blowout losses, Davie’s varsity lacrosse team got off the snide with an 8-3 home victory over West Stokes.

“Good things should come (against West Stokes) when we don’t play a top-10 team in the state,” assistant coach Scott Landy said. “We have a tough schedule and it will pay off in the long run.”

Landy looked prophetic when the War Eagles led from start to finish against West Stokes. They broke a 10-game losing streak with the most goals since last year’s 15-1 romp over North Davidson. That was also Davie’s last win.

“We played well,” Landy said. “There are some areas we can still improve, but overall it was a well-played game.”

Juhasz put up three goals for a team that was averaging 2.4 per game. Ryan Robinson had two, while Collin McManamy, Dylan Walters and Quinn Holcomb had one apiece.

Walters had two assists as Davie improved to 1-5 overall and 1-4 in Conference 9. Juhasz, Robinson, Hunter Akers and Lankford had one assist each.

Davie’s junior varsity lost 16-2 to Reynolds. Chase Alder and George Cuthrell had the goals. The JV remained winless at 0-3.