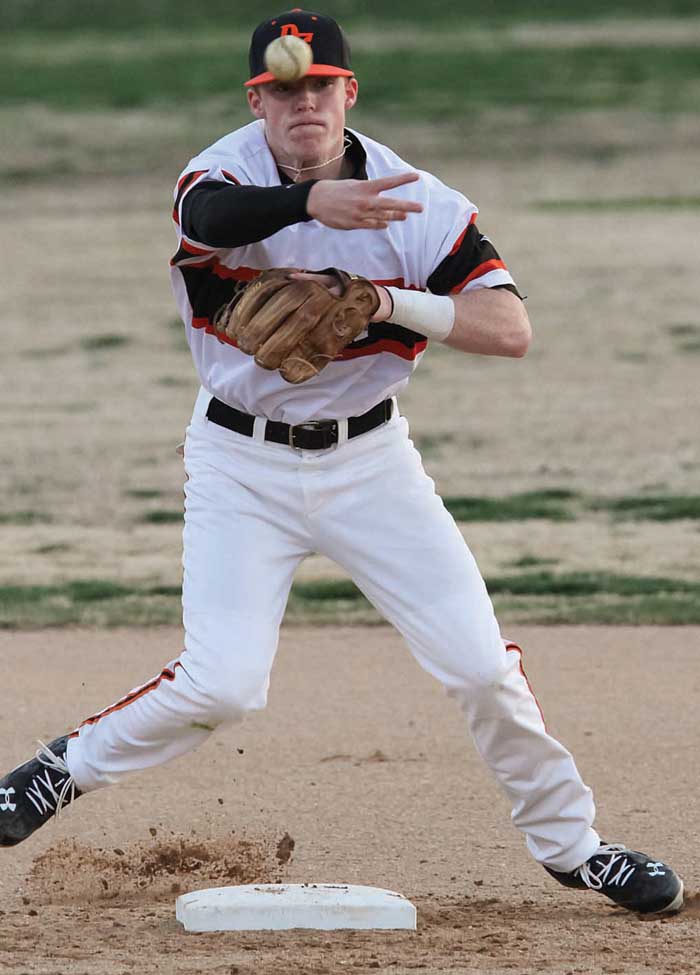 The pitchers have done a terrific job. The defense has been golden. Unfortunately for Davie’s varsity baseball team, the offense has struggled mightily.

Davie is averaging just three runs a game, and its game high in hits is five.

“It’s rough right now,” coach Bobby Byerly said. “We’re pressing too much. We’ve got to take some of the pressure off our pitchers. Defensively, we’re doing all the right things.”

Davie and North Davidson had four hits each. The reason for North’s 5-0 win was two swings – a grand slam and a solo homer.

But in the fourth, a leadoff double and two walks loaded the bases with two outs. No. 8 batter J.P. Blalock was in the batter’s box. The count was 3-2. Blalock drove the fullcount pitch out of the park to make it 4-0.

“It was a pitch on the outer half, low and away, and he reached out there, did a Kirk Gibson and drove it over the left-field wall,” Byerly said.

Nathan Harrell was splendid in three innings of relief, expect for one pitch. The only batter he didn’t retire was Michael Johnson, who socked his second homer of the year in the sixth.

“He threw one bad pitch (out of 37),” Byerly said. “When you hold their top three batters to 2 for 10 with no RBIs, you feel good about yourself. Pitching has not been a question this year.”

Beeker allowed three hits in 5.1 innings to get the win. Austin Beck gave up one hit in 1.2 innings, working out of a bases-loaded, one-out jam in the sixth.

Colby Cranfill (2 for 3) had half the Davie hits. Chris Reynolds and Ryan Harrell were both 1 for 3. Davie scored one run in a span of two games and 10 runs in four games. As a result, it lost to North for the third time in a row.

“We had better at-bats, but we’re struggling to put anything together,” he said.

Davie’s defense was great behind Campbell and N. Harrell. “We were top-notch defensively,” he said. “We made great plays in the infield all around, and Reynolds made a great lay-out catch in left field.”

The pitching and defense came up big – again – and the offense did just enough to enable Davie to beat Ledford 5-1.

A double gave Ledford a 1-0 lead in the third. Davie tied it in the fourth without getting a hit. Mitchell McGee had a leadoff walk, Josh Byrd put down a sac bunt, and Brandon Lankford walked and Ryan Harrell had walks. McGee scored on Jalen Scott’s fielder’s choice.

Davie moved in front 2-1 in the sixth. With one out, Lankford was hit by a pitch. With two outs, Lankford stole second. Scott broke up the no-no with an RBI bloop single over the third baseman’s glove in shallow left.

Davie broke it open in the seventh. Mikey Smith led off with a bunt hit, and he took second on a passed ball. McGee bunted him to third, and Craig Colbourne delivered a sac fly. After Lankford singled up the middle, Scott ripped a two-run double down the left-field line.

Scott played a big role with two hits and three RBIs while making his second start at first base.

“He was 0 for 3 against North Davidson, but he had two really good at-bats,” Byerly said. “He got robbed when he hit a seed up the middle. We took a hunch to put him back in there. He’s been swinging it well in practice, too.”

It was nothing new that Cranfill  and Campbell provided strong pitching. Cranfill got the win by going five innings, walking one and fanning eight. Campbell got the save by working two scoreless innings with three Ks.

Cranfill flirted with danger in the sixth. With Davie leading 2-1, he allowed three straight singles to load the bases with no outs. Campbell put out the fire, getting two strikeouts before coaxing a ground out to first.

Byerly raved about an errorless defense that featured plays from the Harrell twins in the middle of the infield, third baseman Lankford and center fielder McGee.

“We had lights-out defense,” he said. “We made all the routine plays and a couple spectacular plays. The Harrell brothers (with Ryan at short and Nathan at second) made unbelievable plays on bad-hop ground balls.

“There was a little squibber up the third-base line and Lankford threw the guy out by three steps. It was like a major-league play.

“McGee is going gap to gap in center field and running everything down. He had two fly balls that were long runs for him.”

Byerly is also pleased with his catchers, Caleb Wallace and Paul Davenport. “Both are doing great,” he said.