SURF board awards $6,698 for youth projects 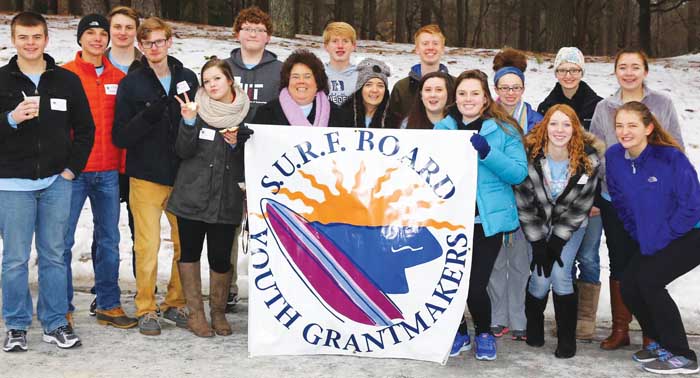 SURF board members at the fund-raising Popsicle Run.

Members of the Davie Community Foundation SURF Board received grant requests for $6,698.

On March 9, they heard proposals for six projects.After reviewing the requests, they voted to fund $5,930.

“The SURF Board worked hard to raise the money to fund their grants,” said the advisor, Tami Daniel.

On Feb. 21, they hosted the 4th Annual Popsicle 5K. One hundred thirty-seven runners signed up to participate, and in spite of a cold and snow-covered morning, the race went off without a hitch.

In addition to recruiting runners, the SURF Board sought sponsors. Foundation President and CEO Jane Simpson,challenged the students to raise at least $5,000, and she would run in the race.

“The students took the challenge to heart, and with the generosity of the community, raised a total of $7,300 in sponsorships,” Daniel said. “SURF will impact many children and youth in Davie County with their grant awards this year.”

The following awards were made for 2015.

• Bike Safety Project: Garrett Penley and Boy Scout Troop 575 were awarded $1,000 to host a Bike Safety Day at Rich Park in April. The first 25 students to sign up will receive a coupon for a free bike helmet. The day will include instruction on the proper use and care of a bicycle, as well as how to mountain bike.

• DHS Science Preparedness: Katelyn Sammons, Grace Cain and the Science Olympiad Team at Davie High were awarded $985 to pay the fee to compete on the state level, and to host a science camp for middle schoolers this summer.

• Hopping for Hope: Austin Lowery and Elaina Burr were awarded $585 to create Easter Baskets for the children at the Dragonfly House. These baskets will provide comfort, joy, and hope to children who have not experienced much joy or hope in their lives.

• Summer Bags for Homeless: Allison Staley and the DHS National Honor Society were awarded $1,500 to create Summer Bags for the Homeless Students in Davie County. There are 105 students classified as homeless. The brightly colored bags will contain hygiene products and well as some toys and activities to entertain these students during the summer.

• Davie Hair Drive: Molly Hartness, Grace Nixon, and the DHS Junior Civitans were awarded $300 for the Hair Drive to be held at Davie High on May 12. The hair drive will collect eight inches or more of hair from participants to create wigs for cancer patients.

Stockings for School: Grace Cain and the Davie Hunger Fighters were awarded $1,560 to create stockings filled with school supplies for middle school and high school students in Davie County. This is the third year that this project has been funded, and local guidance counselors say that it makes a huge difference for these students.

On April 13, the SURF Board will host its “big check celebration” at the Davie Community Foundation at 6:30 p.m., to present checks to the 2015 recipients, and hear reports from the 2014 recipients. The community is invited.