People come from near and far for Davie Medical Center procedure 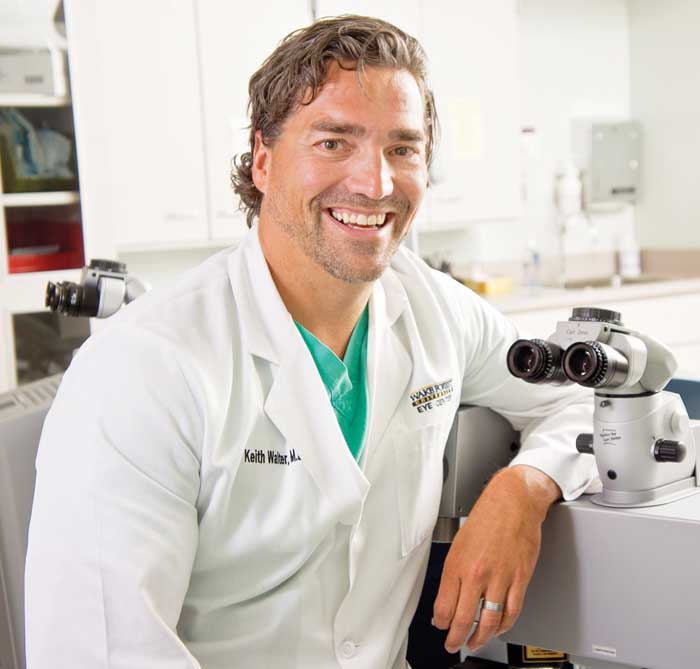 Dr. Keith Walter: "The laser goes to the perfect depth each time."

David Weaver had worn glasses for most of his 68 years. So, he wasn’t surprised to learn last year that the vision in his right eye had deteriorated to 20/1400.

What did surprise him was what happened after cataract surgery was performed with a special laser at Wake Forest Baptist Health—Davie Medical Center.

“It’s like going from a black and white movie to a color movie,” said Weaver describing the difference after surgery. “For the first time, you see Technicolor.”

Cheryl Weaver agreed the change was dramatic for her husband. He was pointing out everything in the kitchen at their home in Lewisville the morning after surgery. “He was saying, ‘I can read that now, I can read that now.’  He loves it,” she said.

The Catalys Precision Laser System used by ophthalmologist Dr. Keith Walter and other physicians at Davie Medical Center is one of two in North Carolina. The system allows physicians to make nearly instantaneous correction of cataracts.

Cataracts are the key reason behind vision loss as people get older, and almost everyone develops them at some point in life. A cataract clouds the lens in the eye; cataract surgery replaces the lens. The Catalys laser system has the ability to correct astigmatism—a different issue related to the shape of the cornea or lens that causes blurred vision—at the same time the cataract is removed.

“The laser controls the shape of the cornea,” Walter said. “If we do those incisions by hand, it can be difficult. The laser goes to a perfect depth each time.”

Using the laser is much quicker. Surgery is done on an outpatient basis and the improvement in vision occurs almost immediately.

Weaver said he was nervous before surgery, but found it to be painless. With only a topical anesthesia needed, the procedure is completed in 15 to 20 minutes. As someone who has endured multiple surgeries for health issues, Weaver says that cataract surgery was by far the easiest.

Walter pointed out that not everyone is a candidate for cataract surgery with the Catalys system. Some patients’ pupils will not dilate and others have scars on the cornea; either condition requires traditional cataract surgery. Still, more and more people are taking advantage of laser surgery.

Walter, who also maintains a practice at Wake Forest Baptist Medical Center in Winston-Salem, said 90 percent of his patients now come to Davie Medical Center. Besides the state-of-the-art equipment, the convenience and ease of getting in and out of the new building make it a perfect location for older patients, he added.

In addition to cataract surgery, Walter and other members of Davie Medical Center’s ophthalmology team handle eye care and special treatment for corneal and external diseases of the eye. Some 300 to 400 people visit the Eye Center at Davie Medical Center each month including some traveling from as far away as Mount Airy and West Virginia.

Weaver praised the team of people who helped him before, during and after his cataract surgery.

“My eye doctor at the VA actually recommended I come and see Dr. Walter,” he said. “And I am very impressed with him and everyone here. This is an extremely nice facility.”