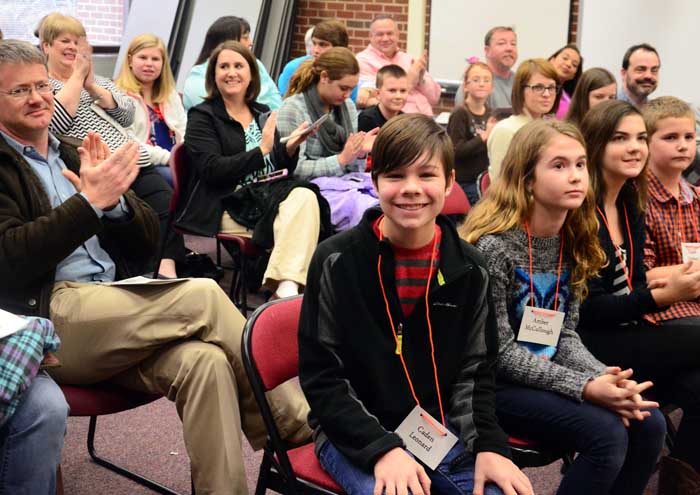 They were already all winners, having won spelling bees in their own schools, but Feb. 25, nine students lined up for their chance to compete for a spot in the Regional Spelling Bee.

Representing six elementary schools and three middle schools, the students went round after round, making it to the 56th word on the list, the farthest facilitator Danny Cartner said he could remember.

Before the Bee began, Jinda Haynes, director of K-12 curriculum and instruction, greeted the students, reminding them it was a day to celebrate, and Cartner acknowledged Beth Keville, who organized the event. He went over the rules and had students take a deep breath to calm their nerves before beginning.

In round three, Noah Chaffin, from Shady Grove Elementary, went out on “discipline,” and Kaleb Dodson, from Pinebrook Elementary, was eliminated after misspelling “periscope.”

Olivia Jones from William Ellis Middle went out in round four on “transect,” and although Bella Thompson from South Davie Middle misspelled “begonia,” she reappeared later to compete for third place.

Caden Leonard, from North Davie, went out in round five on “parfait,” but after Amber McCullough from Cornatzer Elementary misspelled “persimmon,” he and Amber went back and forth. After Amber misspelled “topography” and Caden correctly spelled “benefactor,” he was the winner.

Amber took second place, and Bella and Olivia went back and forth for 20 words, before Bella spelled “amarillo” correctly for third place.

Caden will compete March 15 at the Regional Bee at the Milton Rhodes Center of the Arts in Winston-Salem. The spelling bee is part of the Scripps National and the Winston-Salem Regional Spelling Bees.

Each student was introduced by their teacher.

Karen Stephens introduced Abigail Wells, a fifth grader and the daughter of Tim and Katrena Wells. Abigail is part of the flag display team and Battle of the Books, and in her spare time, enjoys reading and rock climbing.

Amber McCullough, the daughter of Brad and Dawn McCullough, likes to read, swim, is smart and funny, and is “just like another little daughter,” said teacher Amanda Brooks. She is in fourth grade.

Introduced by Marsha McKnight, Hazel Marion is a fourth grader and the daughter of Kevin and Susan. She is an avid reader and is a great speller, McKnight said. Her mom and brother helped her study for the bee. She has two sisters and a brother.

Kaleb Dodson, son of Timothy and Ashley Dodson, loves science, especially studying forces and motion, and he also enjoys playing baseball, said teacher Laura Martin. He competed in the spelling bee at his school as a fourth grader last year.

Aidan Meagher is the third Meagher teacher Heather Dyson has taught, and she said his parents Brian and Jennifer have done a wonderful job raising their children. Aidan, she said, is smart, loves to read and is an all-around wonderful student. He is in fourth grade.

Introduced by teacher Tonya Kerr, Caden Leonard is in seventh grade and is the son of Valerie Leonard. Kerr said she is amazed by Caden’s knowledge of vocabulary. She has taught him for two years and said he is a “big video-gamer and decoder who is very smart.”

Noah Chaffin, son of Kendall and Melissa, was introduced by Emily Lill. She said he loves to read and loves sports, including soccer, baseball and football. “He is really excited to have this opportunity today,” she said of the fifth grader.

Bella Thompson, daughter of Jennifer Thompson, is in seventh grade. Teacher Kathy Crews said she is the rare student who doesn’t mind spelling homework and studying for spelling tests. She also enjoys volleyball and reading.

Introduced by teacher Lynn Turner, Olivia Jones, a seventh grader, is the daughter of Matt and Natasha Jones. She loves to read and is talented, and Turner said “she is a very old soul” who loves the same music Turner does.