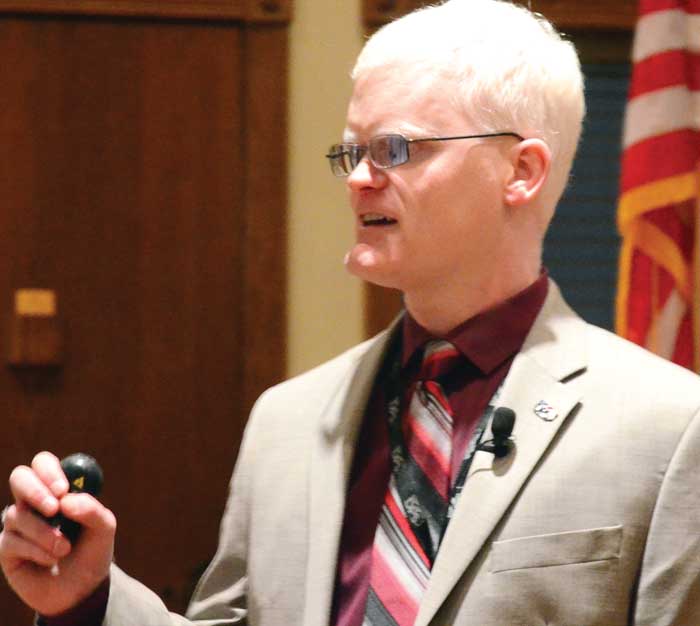 William Lassiter heard that more than once after the school shootings in Columbine, Colo.

“That’s not what happened,” he said. “They had a plan. They had planned it for more than a year.”

Speaking to a group of Davie educators, law enforcement officers, court officials and others who deal with juveniles involved in crimes, Lassiter gave some statistics and advice to help them do their jobs at a symposium here last week.

Of students invovled in school shootings, 75 percent were “sick and tired” of being bullied in school. “You’ve got to start with the bullies,” he said.

On gang involvement, Lassiter said help must be provided in the first year. Those kids, he said, want somebody “to have their backs.”

Lassister said the No. 1 reason a student takes a weapon to school is for protection. They don’t feel safe.

“Schools are not unsafe places. Kids are more likely to be victims at home or in their communities.”

But in some cases, the kids don’t feel safe.

While parents think that fences, more law enforcement and more secure campuses are the answer to school violence, the students say that more parental involvement would help.

While the factors contributing to juvenile delinquency are many, Lassister said it is up to parents to cut off the TV, monitor what they read and more importantly, the time and type of video games they play.

“When your brain is developing, it cuts off part of the brain you don’t use very often.” Too many hours of violent video games on a young brain can lead to paranoia and difficulty following tasks at school.

He didn’t back away from saying schools need to change policies. He gave an example of a kid who was bullied for weeks and finally erupts into anger at the bully. Both are suspended the same amount of time for fighting.

North Carolina suspends more students than all but one state for truancy. Most are suspended at least three times.

“If it didn’t work the first time, why are we doing it two more times? Suspension is not an intervention … it’s like a paid vacation. We’ve got to think of better ways to deal with those kinds of problems.”

A child breaks the law in school, do you send them to the principal’s office or call police? The court system, Lassiter said, is too slow.

“If you want it to work, the punishment must be immediate.”

Lassiter admits he doesn’t have all the answers, but encouraged those at the meeting to do their best for each individual child.

“Kids are different. Situations are different and we need to look at each one on an individual level. Look at all of the environments a kid deals with.”

One thing everyone can do is be a positive role model.

Twenty-two percent of teens do not have at least five positive role models in their lives. Research has shown that those who do are 90 percent less likely to become a delinquent.

“One of the most important things we can do is spend time with young people. Be engaged with them. Be that positive role model.”

He cited a study that followed kids for 20 years. Bullies in kindergarten were likely bullies for the rest of their school career, and 40 percent were convicted of at least three crimes by age 24.

“Why do we wait before we intervene? Kindergarten teachers can identify kids that will be going into the court system. The reality is – these teachers know. How can we stop this behavior? Ignoring it sends a powerful message.

“Kids are not going to believe you unless you are sincere. Many of these kids don’t have any support at home … that’s where we have to step in.”

The youth symposium was sponsored by the Davie County Juvenile Crime Prevention Council. Lassiter is the deputy commissioner for juvenile justice at the N.C. Division of Adult Correction and Juvenile Justice.

With the theme “Power of Community,” the day-long event included seminars and panel discussions.