Arbor Too Unsafe To Repair 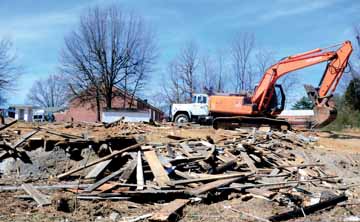 For 135 years, folks gathered under the arbor on the Masonic picnic grounds in Mocksville, hearing the likes of speakers such as Jesse Helms and listening while the Masonic leaders from the three local lodges explain how the annual picnic benefits children.

Then they’d move to the adjacent picnic shelter for the big meal.

But change is inevitable, and the razing of the arbor and shelter leaves questions as to the future of the picnic.

Taylor Slye, a Mason in the Mocksville lodge, said the arbor, which was built in the 1950s, had become unsafe and was a liability.

“Last year, we borrowed a lift that was being used to paint the Methodist church uptown, and we were able to jack it up (the arbor) and get it ready for the picnic. The wind had blown the roof off several times, and we kept patching it, but the whole thing had just gotten so unsafe,” he said.

The picnic began in 1878 as an event to recognize Confederate soldiers returning from war. Slye said people came from all over, in horse-drawn buggies and by whatever means they could for the weeklong event that centered around the picnic, traditionally held on the second Thursday in August.

As the years passed, carnival type rides and games entertained the masses, but the picnic itself didn’t change. Slye said people would take off work to cook and eat, local business would shut down, and the picnic grounds would be full of people. But as the older generation, for whom the picnic was a grand event, have aged and passed, the picnic has “become lean,” Slye said. “The younger ones have to work, they’re committed to work, and a lot of the older ones have died. The rides went under years ago because of the high cost of diesel fuel and the liability insurance involved.”

He remembers when Jesse Helms spoke and a picture was taken that ended up in Newsweek, laughing as he tells that he can see himself lurking in the back of the picture.

Slye said the tractor club built an extension onto the building where concessions were, and the meal has taken place there for the past few years.

Around the beginning of the year, a vote was taken and the majority said it was too costly to keep putting money into the aging structure. Slye said one person voted against it, because he had so many fond memories of good times spent there.

“There is a lot of history there, and a lot of good times, but the bottom line is the old arbor finally did its due and got to be an unsafe deal,” Slye said.

He and Jimmy Myers, a Mason in the Farmington lodge, said there has been talk of possibly building an amphitheater, because it’s such a good, central location for all types of entertainment.

When asked if the picnic would be held this year, Slye said there has been discussion about moving it to the weekend, but they aren’t sure if that’s feasible, because of so many other events going on. Myers said his idea was to hold the morning program at the Brock Performing Arts Center and the lunch in the shelter extension on the picnic grounds.

There will likely be a meeting of the three lodges soon to make a decision. Slye said he hopes the tractor club and Arts Council will be part of the decision making.