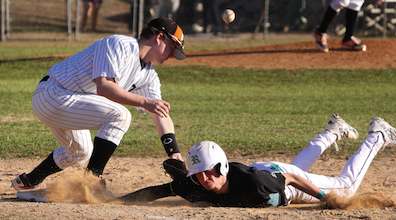 Down 5-0 after five innings and 6-2 going into the bottom of the seventh, the Davie jayvee baseball team was going to need a series of clutch hits and a little luck to overcome visiting Reagan in the Central Piedmont Conference opener.

Davie got just enough of both to pull out a 7-6 decision.

“It was a very unique game,” coach Dan Lawlor said. “The fortitude of the team was really something to behold. We clawed ourselves back to striking distance, and that’s really all you could ask for. And then we got a couple breaks, we squared up the ball really well the last at-bat and we pulled it out.”

Davie had no answer for Reagan’s starting pitcher. He left after throwing five shutout innings.

“He pitched lights out,” Lawlor said. “He moved the ball up and down and in and out. He did everything right.”

Trailing 6-2 going into the last of the seventh, Davie was in serious need of gasoline and a match. Its magical rally included three hits, a walk and four errors. Andrew Davidson reached on an error, but it was 6-2 with two outs.

It was absolutely amazing to score five runs with two outs. After Ryan Harrell reached on an error, Craig Colbourne came up big, his two-strike double to right making it 6-3. Paul Davenport swung and missed at strike three, but the pitch got away from the catcher and Davenport reached first.

Reagan made a pitching change.

On the second offering to Forrest Barber, he smacked a two-run double to the fence in left-center. Now it was 6-5 with runners at second and third.

“Forrest had struggled up to this point,” Lawlor said. “But he roped a ball as hard as I’ve seen this year. It was a laser.”

After Jalen Scott fell behind 0-2, he sent a hard shot to second. The grounder went under the fielder’s glove, and the tying run crossed home.

“I had to hold up Barber because it was hit so hard,” Lawlor said.

With runners at the corners, Reagan intentionally walked Beau Byerly. That set the table for Isaac Campbell, who dumped a lazy fly into no-man’s land – between the left fielder, third baseman and shortstop. Miscommunication allowed the ball to drop in.

With Campbell’s line-drive-in-the-book hit, Davie had a wild and crazy victory. “We had some wonderful, wonderful key at-bats (in the seventh),” he said.

Scott, who pitched the final two innings, wound up with the win. Lawlor said he “pitched two great innings.”

Although starter Nathan Harrell gave up five runs in five innings, Lawlor said he didn’t pitch badly. Reagan scored three in the first because “a routine ground ball ended up being a base hit,” he said. “We should have been out of the inning with no runs. Nathan pitched pretty well. He kept it from getting out of hand.”

At Alexander Central, the War Eagles rolled to 4-0 with a 15-5 blowout.

“We are improving on our quality at-bats each game, and we show signs of brilliant play,” Lawlor said.

Davie’s unbeaten season ran into a buzzsaw at Reagan, which got redemption for its collapse earlier in the week.

Reagan’s complete-game pitcher hurled a no-hitter in a 2-0 win over Davie as he struck out 11 in the first five innings.

“Hey, he was good,” Lawlor said. “Our kids couldn’t adjust to him. He threw pretty hard. He was one of the best jayvee pitchers I’ve seen in the two years I’ve been here. He had a good curveball.”

The Raiders touched Campbell for two runs in the first. From that point on, Campbell was masterful. He finished with a complete-game three-hitter.

“He pitched a great game,” he said. “It wasn’t his A game, but he has some high potential. He made big pitches when we needed it. He kept the game close and gave us a shot, and that’s all you can ask of a kid.”

“We hit some really hard balls right at people,” he said. “I thought both teams played very, very well. They got one or two breaks and that was the difference.”