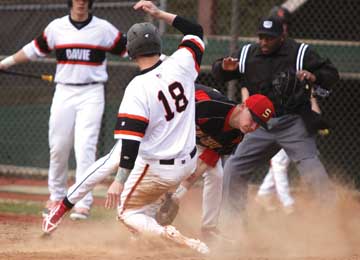 The Davie varsity baseball team overwhelmed Randleman (18-5) and Salisbury (11-5) in two home games to begin the season, but coach Bobby Byerly is not ready to celebrate.
Much bigger obstacles loom on the horizon.
“We know coming down the road we’re going to have bigger tests,” Byerly said. “So we have to make sure we’re prepared for it as much as possible.”
Pitching is the biggest question mark. Byerly has a host of guys who can pound the strike zone, but he doesn’t have an overpowering arm. They must hit spots and rely on the defense to get outs.
“We have to understand we’re not going to blow anybody away with our 79-81 mile an hour fastballs,” he said. “We’re going to have to hit our spots.”
•
After serving as a seldom-used backup in 2013, senior Ross Hoffner might be ready for a breakout year. He was 1 for 10 at Davie as a junior. He picked up valuable experience last summer on the Mocksville Legion team, seeing 72 at-bats.
Hoffner enjoyed an eye-opening start against Randleman, going 2 for 2 with six RBI. He had a two-run single, a successful squeeze bunt and a three-run double off the wall in left-center. He had two more RBI in the second game.
“It’s like (Barry) Whitlock told him, he’s probably leading the state right now in RBI,” Byerly said.
Ben Beeson (2 for 4), Charlie Muchukot (2-3), Luke Martin (2-4, two RBI) and Jacob Barnhardt (1-4, three RBI) were productive as Davie scored the most runs in 65 games (dating to a 19-14 win at East Rowan in 2011).
Brandon Lankford, the only sophomore on the team, singled in his varsity debut as Davie put up eight-spots in the first and third.
“Beeson has come out hot, including our scrimmage earlier in the week,” he said. “He’s hitting everything on the screws. It’s the same ol’ Muchukot. He just slaps it everywhere. He’s the best two-strike hitter I’ve seen in a long time. It drives me crazy because he waits until there’s two strikes. (A left-handed hitter), he’ll slap it in the five-six hole or hit something back up the middle.”
Tristan Comer gave up three unearned runs in 1 2/3 innings before giving way to Colby Cranfill, who earned the win by allowing one earned run in 3 1/3. They checked Randleman on six hits as the game ended after four and a half via the mercy rule. Comer exited early because of a blister.
“Cranfill had a hiccup early on, but then he settled down,” he said. “For the first outing with it freezing cold, I was pleased with it.”
•
The next game against Salisbury followed the expected script.
Davie jumped ahead 4-1 in the first and made it 8-1 in the second. When Salisbury, which bombed two homers, pulled within 8-5 in the top of the third, Davie answered with three to all but put the Hornets away.
The only thing Byerly was not thrilled about offensively was five strikeouts looking.
Beeson (1-2, double, two walks), Muchukot (2-4), Elijah Jones (1-3, two RBI), Martin (1-2, two RBI), Hoffner (1-4, two RBI) and Barnhardt (2-4, two RBI) led the onslaught.
After Carson Bishop pitched three innings, Jared Wolfe got the win in relief as he worked four scoreless innings.
The roster includes nine seniors, five juniors and one sophomore (Lankford). The seniors are Beeson, Muchukot, Jose Carrillo, Jones, Tommy Boyette, Barnhardt, Bishop, Hoffner and Comer. The juniors are Ryan Heath, Martin, Cranfill, Wolfe and Curtis Dillon.