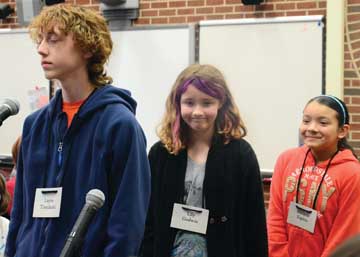 For most people, the word trauma is not associated with anything positive, but for Layne Timidaski, that word was the moneymaker at the Davie County Schools’ Spelling Bee last week.

In round eight, Timidaski correctly spelled trauma, making him the winner of the Bee for the second year in a row and earning him a $250 gift card.

Before the Bee began, Jeremy Brooks, facilitator, told the nine participants, all winners in their own schools, to take a deep breath, and reminded them: “You have already proven you belong up here. You’re the Davie County Spelling Dream Team.”

The participants were introduced by their teachers.

Aliyah Byerly is a fifth grader in Carmen Moore’s class at Cornatzer. Moore said Byerly worked hard to get ready for the Bee.

Melanie Espitia, a fourth grader at Mocksville, was introduced by her teacher Madison Wyatt. Espitia studied morning and night to get ready for the Bee, Wyatt said.

Jake Hill, a fifth grader in Timothy Devericks’ class at Pinebrook, was introduced by Laura Martin. She said Hill spent the recent snow days studying for the Bee, and he is a hard worker, excellent student and also plays sports.

Luke Stillson, a fifth grader at Shady Grove in Jessica DeLade’s class, plays piano and soccer and excels at math.

Katie Dyson is in fifth grade at William R. Davie. Her teacher, Kayla Untz, said, “she is one of the hardest workers I’ve ever seen.” Dyson used her free time to study for the Bee.

Lily Godwin is in sixth grade at North Davie. Tonya Kerr, her language arts teacher, said Godwin reads a lot and impresses her every day.

David McGreevy, an eighth grader at South Davie, doesn’t love to read but does love to spell, said Kathy Crews, language arts and math teacher. “He is a wonderful student and is on the tennis and soccer teams.”

Dyson was first up and spelled bandit correctly. Booth missed thermal and was out. McGreevy went out on the word bonanza.

By round four, only Espitia, Godwin, and Timidaski were left, but Espitia went out on the word igneous. She became the third place winner of a $100 gift card.

Godwin missed the word lariat in round seven, becoming the second place winner and taking home a $150 gift card.

All participants received a $50 gift card to Barnes and Noble bookstore.

Timidaski will advance to the Regional Spelling Bee March 23 at the Milton Rhodes Center of the Arts in Winston-Salem.

Judges were Kathy Crews, Donna McNeil, Joni Russell and Laura Martin. Noel Grady-Smith, who presented the prizes, gave a special thank you to Beth Keville for organizing the event.

Slow down: Resident says speeding on residential street out of control

Healthy Can Be Fun