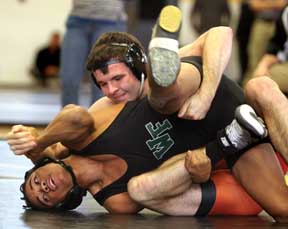 Although Davie senior Alex Gobble did not win the state championship at 182, he will live in Davie lore. He will go down as a great, great wrestler who reached the doorstep of the ultimate goal. He came within one win of wrestling immortality.

Only 24 wrestlers in the history of Davie can say they finished first or second in the North Carolina High School Athletic Association tournament. Gobble strived to become Davie’s 12th state champion, but he had to settle for becoming the 13th state runner-up.

“The whole experience of being in the finals is bittersweet,” Gobble said. “The outcome and how I felt (afterward) is a terrible feeling. I have a lot to be proud of with what I’ve accomplished at Davie, but I wish I could have done more.”

“It’s a great feeling to know I’ve worked so hard over the past four years,” Gobble said. “I learned a lot and made a ton of friends along the way. I mean it’s a great experience.”

Davie went into the Midwest Regional on Feb. 16-17 at Northwest Guilford without a full lineup.

Davie was expected to advance five to the state tournament – the top four in each weight class earned state berths – but two of the five suffered freakish injuries in off-the-mat accidents. Junior Lake Billings competed in the regional anyway, but he was severely hindered and bowed out with an injury default. Billings was considered all but a lock to reach the state as he entered the regional with a 37-7 record.

Gobble finished second in the regional as a sophomore and junior. By going 3-0, including a pin in the finals, he yanked the monkey off his back and kicked it across Guilford County.

Last year he lost in the regional finals – by seven points – to the eventual state champion at 182. “I felt it was my time to step up and really perform in the finals,” Gobble said.

In the finals, Gobble was matched with Northern Durham junior Atavion Oliver, who was 39-1. Oliver advanced with two pins and an 8-4 decision.

Gobble was clinging to a 10-9 lead after two periods. He rose to the occasion and pinned Oliver in the third, giving him the winning chapter on the regional stage he had longed for.

“I got a break when I pinned him,” he said. “He relaxed on the mat and that was my opportunity to pin him. I just kept it simple like coach Lowery says.

Correll pinned twice and won 7-2 before losing 6-4 in the finals to a top seed from NW Guilford. The NWG dude improved to 44-1.

Gobble entered the state meet with a good dose of determination and experience. He checked out at 1-2 as a sophomore state qualifier, and he placed fifth at 182 as a junior.

He was craving more as a senior, and he continued an exhilarating ride with three wins – 8-2 over Holly Springs junior Josh Richardson, 2-0 over Hough senior Sebastian Barreto (51-6) and a pin over Millbrook senior Dillon Dawkins (41-6).

“(Barreto) was a very strong kid,” Gobble said of the 2-0 quarterfinal win. “I mean he was well built. I didn’t have a good first-round match, and at that point in the tournament I was just doing everything I could just to get by. He was short and stocky, and I didn’t want to take any chances of getting caught. So I just rode him out after I got that takedown.”

Gobble lost in the 2013 semifinals. He made amends by pinning Dawkins.

“I was very motivated because of what happened last year, losing by three (in the semis),” he said. “I was very determined to prove a point that I deserved to be a state finalist.”

In the finals, Gobble and South View senior Malik McDonald both hit the mat brimming with confidence. Gobble was 48-1, McDonald 46-1. McDonald reached the main event with three straight pins.

Gobble had no answer, losing 14-2. McDonald had to be considered the favorite considering he pinned Gobble twice last year, including once in the state meet.

“I could have done some things different because before I had a different strategy going in,” Gobble said. “I was going to work some stuff that I had been practicing for the past few months, but then once I got into the match I went back to what I always had trust in doing, and that didn’t work for me.”

“It could have changed if Gobble would have got the first takedown,” Lowery said. “(McDonald’s) good, though. Gobble worked hard, but I’m sure that other guy did, too. It just wasn’t meant to be.”

Gobble may have stumbled at the final hurdle, but he has gaudy numbers to look back on, memories to cherish for years.

“There’s nothing you can say,” Lowery said. “It’s like going to a funeral home – anything you say they’re not going to hear it at that point. He did everything he could to get ready to win a state championship.”

Robertson and Correll both went 1-2.

Robertson opened with a 7-2 win over Lumberton junior Thomas Thompson. But then he lost 3-2 to Alexander Central senior Dustin Jones (37-2). His career ended with a pin by Broughton junior Roberto Phillips (33-5).

The pin defeat was hard for Correll to swallow. It was one that got away. “Parker was in full control,” Lowery said. “I mean Parker wrestled good. (Alanis) did a roll and came up into a Peterson.”

Robertson and Correll weren’t place-winners, but it’s a big accomplishment to merely qualify for the state. Robertson qualified for the third time. He went 40-6 this year and 111-47 for his career. Correll demonstrated drastic improvement for the second year in a row. He went 8-10 as a freshman, 35-16 as a sophomore and 43-7 as a junior. This was his first state appearance.

“Hopefully Parker learned some stuff,” Lowery said. “You’ve got to be there before you can (place). All three of them wrestled their butts off.”

Parkland was the team champion with 173 points. The Mustangs produced three champs. Davie (24 points) was 19th out of 74 teams, and it was the No. 2 finisher among Central Piedmont Conference teams.