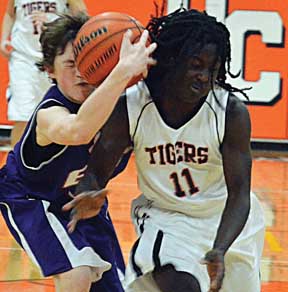 The South Davie boys basketball team was looking for a win that would sustain its spotless record and secure a second-straight berth in the Davidson-Davie Conference Tournament final. Ellis was looking for the big win, a chance to ruin South’s bid for perfection and celebrate one of the biggest victories in the Jaguars’ seven-year history.

It had been so long since the Tigers were in a close game that you had to wonder how they might react. Just fine – as it turned out. The top-seeded Tigers emerged with a 55-48 decision over No. 4 Ellis in a semifinal game at Davie High before a large crowd.

One game after scoring 30 points, South’s Cooper Wall delivered in the clutch, scoring a tiebreaking basket in the final minute, to finish with 27.

The Jaguars pushed South to the limit even without one of their top players, Peyton Hampton, who was out with a broken finger.

When the first quarter ended, South had a 14-11 lead. The Tigers extended the halftime margin to 29-21. Ellis hurt itself badly by going 0 for 8 from the free-throw line in the half.

The Tigers surged ahead by 15 in the third before settling for a 44-33 advantage by quarter’s end. At that point, the Tigers appeared on their way to a ho-hum cruise. Only one game all season had been decided by fewer than 16 points, and that was a 49-43 win at Lexington.

This time, however, the Jaguars refused to go away.

“They scrapped back in it,” South coach Brent Wall said. “Even playing without Peyton, they stayed around and made some big shots when they needed to. And Michael (Walton) was a killer from the free-throw line.”

Walton and Hite Merrifield were fantastic. Walton had 19 points to go with nine rebounds. His previous scoring high was 18. Merrifield turned in 16 points and 10 rebounds – his second straight outing with 16. Mason Wilson contributed six points.

Walton’s 8-for-8, fourth-quarter performance from the line allowed Ellis to get off the deck and create a scintillating finish.

While South is fueled by eighth-grade talent, the Jaguars are a budding monster. Forty of their 48 points were scored by seventh graders.

“Michael is going to be one of those 18-to-20-point scorers on a regular basis next year,” Wall said. “Hite had a real good game. He is a dirty-work guy. He gets a bunch of rebounds.”

Nursing a 48-46 lead, the Tigers had possession and were set to milk the clock. Walton foiled that plan with a steal that led to two successful free throws that tied the game.

“We were trying to hold it,” Wall said. “Michael jumped in front of a pass. Curtis (Gray) caught up with him and fouled him, but he hit both free throws.”

Now the gym was electric. If there ever was a time for someone from South to make a play and wake the Tigers from a nightmare, it was now. It came from – who else? – Wall.

Wall saved the day by making a short jumper with 45 seconds left. He was fouled on the play but missed the free throw.

“We were going to hold it until we got a good shot,” the father/coach said. “Cooper felt like he had a good seam and he got a jumper from around the free-throw line.”

Gray rebounded Wall’s missed free throw and was fouled, but he missed both to keep Ellis alive.

Ellis had a chance to tie or take the lead, but Jalen Redmond stole a pass and found Wall, who was fouled with 14 seconds remaining. Wall, who averages 19.2 and holds the county record for career points, sealed the deal by making both foul shots.

South would not have survived the drama without Cameron Player’s season-high 10 points. He had hit eight points four times this season. Gray was next with eight.

“Cameron could have had more points,” Wall said. “But I don’t ever fault Cameron because he’s 110 (percent). When he steps on the court, he’s diving for balls and getting after rebounds. He does everything we ask him to do. Scoring is just icing on the cake from him.”

On Feb. 18 at Lexington, the Tigers faced No. 6 Thomasville in the championship game. They were a heavy favorite, having beaten Thomasville twice by 17 in the regular season.

A win would put South on a very short list in the all-time department. First, it would set a school record for wins by a boys team. Secondly, it would mark the first time in the 21-year history of middle schools that a boys team finished undefeated. Three girls teams have achieved perfection: Eighth-grade South in 1999 coached by Sheila Tribble, seventh-grade South in 2002 coached by Tim Kenney and 2013 North Davie coached by Trish King.

Despite the fourth-quarter heartache, the Jaguars left with much to be proud of. They finished 11-5 for the most wins in school history. The previous high was seven by last year’s squad. This was their first winning season.

Walton closed with a team-high average of 10.6. Hampton averaged 10 and Merrifield 6.8. All three are seventh graders.